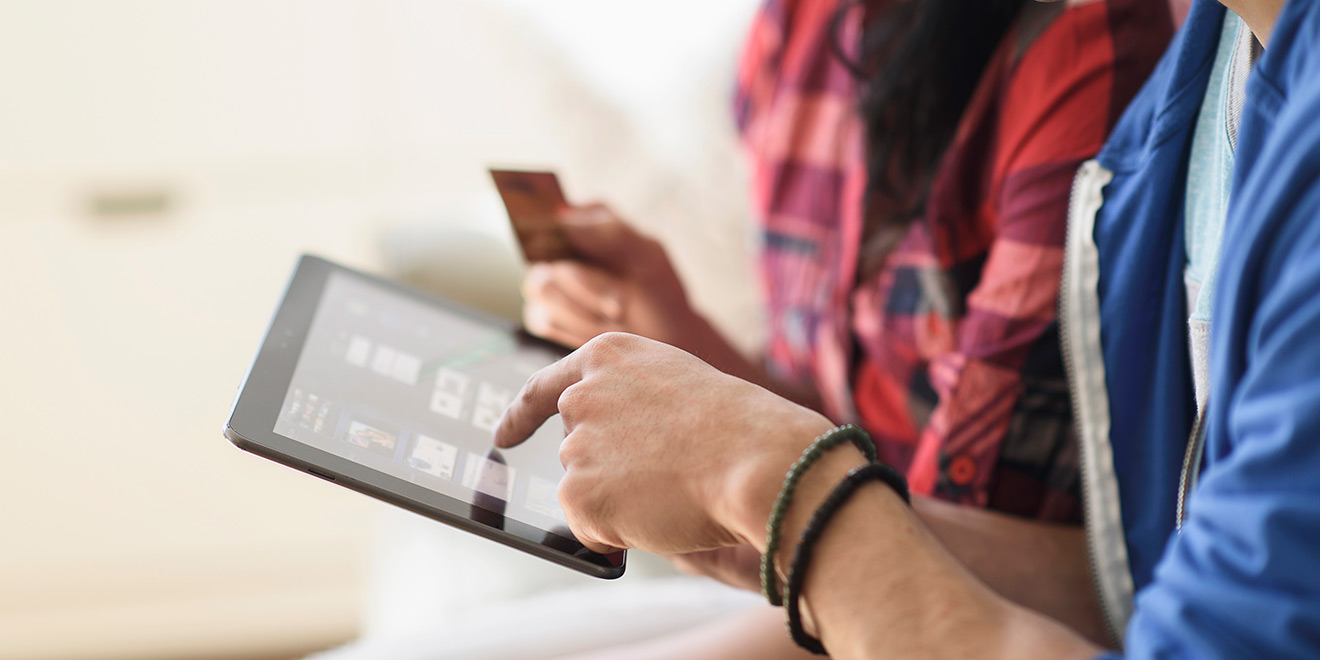 We’ve been hearing about ecommerce killing off brick-and-mortar retail for a few years now. And while there’s no evidence that physical stores are about to vanish, a new study does add a further note of ominousness to this familiar prediction.

This holiday shopping season, more shoppers plan to buy gifts online than in stores. That was one of the paramount findings of Deloitte’s 2017 Holiday Survey released at the end of October. This year, for the first time, more shoppers said the internet would be their top destination (55 percent), moving mass merchants to second place (44 percent). Last year, physical retail had a slight edge over ecommerce: 51 percent for stores and 45 percent for online.

Source: Deloitte
So, we knew this was coming. But why this year? The simple answer is that ecommerce has been clawing away market share for a long while, and grabbing a majority stake was bound to happen sooner or later. But of course, there’s more to it.

“It’s a little bit the year, but it’s a lot about consumer behavior,” said Courtney McKlveen, head of U.S. field sales for Oath, the media and advertising company formed out of Verizon’s Yahoo-AOL merger. McKlveen wagers that because “the shopping season is longer, customers begin looking [for gifts] sooner.”

And since shopping research often starts online, e-retailers will naturally benefit. McKlveen added that, as always, the increased competition—historically, much of it coming from Amazon—has increased the pressure on retailers to offer competitive prices. And here again, online merchants tend to come out ahead. “The consumer is driving the activity,” McKlveen concluded, “and online benefits because there’s pressure on time and price.”

But according to Deloitte’s research, there are also a number of specific, performance-based reasons for online merchants pulling ahead of brick and mortar this year. When it comes to key attributes ranging from product variety to delivery options, online retailers consistently outstripped their physical-store competitors (see chart below). For instance, 64 percent of shoppers said it’s easy to search for merchandise in stores, but 79 percent said it’s easy to search online. And while 31 percent appreciate the delivery options at stores, 56 percent like their options with online retailers. 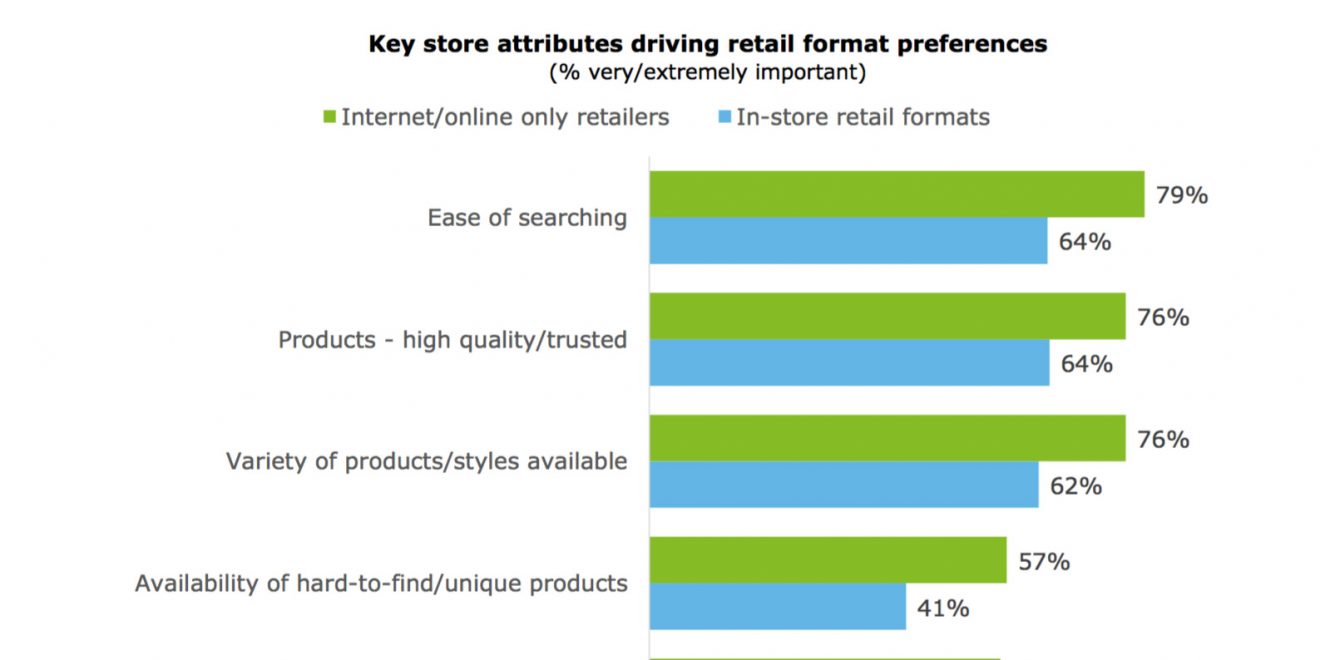 Source: Deloitte
These results don’t mean the web is cleanly trouncing the old-fashioned store, however, as there’s considerable overlap between the two in both shoppers and shopping habits. Nearly a third of shoppers (32 percent) said it’s “important” for a retail brand to have both an ecommerce function as well as physical store locations.

What’s more, there’s no hard dividing line between online and physical shopping occasions anyway. Retailers have known for years that many in-store shoppers are also using their mobile devices to place orders. (In fact, Deloitte found that 40 percent of shoppers expect to use a retailer’s app on their smartphones this year.) And according to Robert Glazer, founder and managing director of digital marketing agency Acceleration Partners, this is an area that’s allowing traditional retailers to compete with their younger and more agile ecommerce brethren.

Deloitte’s survey also found that 40 percent of shoppers use computers not just to buy things, but to find locations of physical stores—so, here again, it’s not so much a matter of online replacing brick and mortar as there being a complex and ongoing relationship between the two.

Respondents to Deloitte’s survey also indicated that they appreciate the opportunities physical stores give them, such as being able to touch the products they’re thinking of buying. That’s something that, thus far, online retailers simply can’t provide.

Wherever shoppers wind up spending their dough, what’s certain is that they spend a lot of it at this time of year—some $1 trillion. That breaks down to an average holiday expenditure of $1,226 per person. Predictably enough, that figure increases according to the shopper’s income. But what’s more telling is how that money gets spent. Deloitte’s survey found that the holiday season actually doesn’t always have a lot to do with the spirit of giving, unless you count giving to yourself. 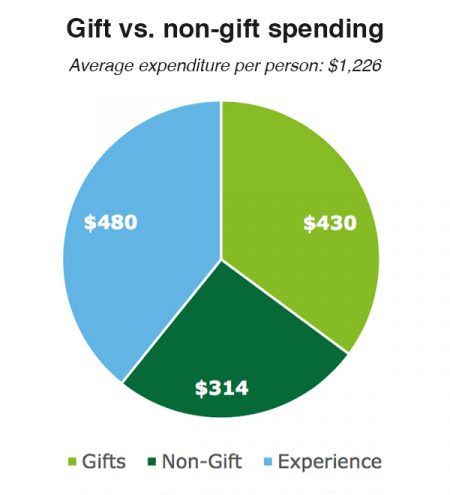 Source: Deloitte
Shoppers report that they’ll drop plenty of money on items they personally want (clothes are a biggie) and also on entertainment and socializing. So if you take that $1,226, only $430 of it will wind up being spent on presents.

In fact, despite the spirit of the season, the numbers suggest a tradition of selfishness has been building for a few years now. For example, shoppers will buy an average of 14.7 gifts, but that’s down significantly from the 22 gifts each consumer purchased in 2006. Similarly, while 36 percent of respondents admitted to buying “gifts for themselves” when questioned in 2012, that figure rose to 50 percent this year.

Are we becoming more selfish? Perhaps. Or maybe it’s just that with all the opportunities to shop—in stores, on our laptops, on our phones—we simply can’t help ourselves.