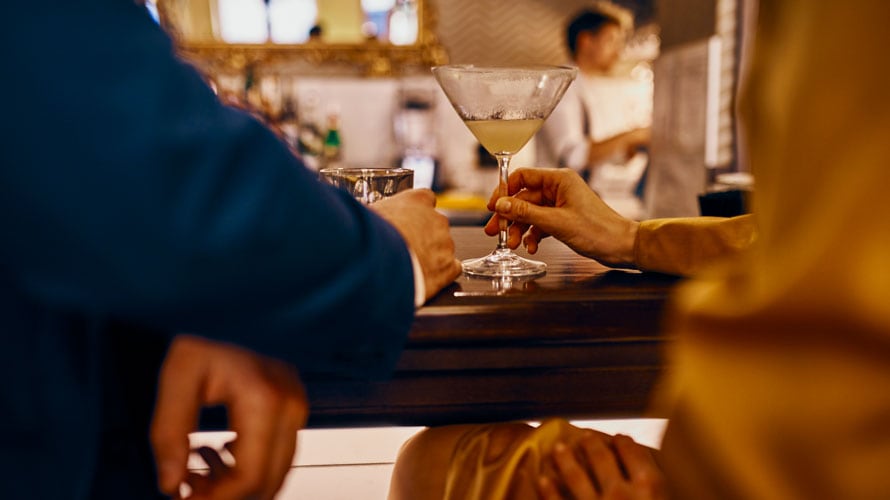 The survey suggests that the lobby-bar cocktail is becoming an anachronism on par with cigar smoke and three-piece suits. - Credit by Getty Images

It’s a legendary slice of a sales exec’s or adman’s life on the road—sealing a deal over cocktails at the hotel bar. As far back as anyone can remember, road warriors have used the bar off the lobby to conduct business, often over a martini.

But a new survey suggests that this tradition is becoming an anachronism on par with cigar smoke and three-piece suits. Not only are business travelers drinking less alcohol than they used to, a surprising number of them are skipping the evening cocktail in favor of alternatives that have nothing to do with that bar in the lobby.

Cambria, an upmarket property operated by Choice Hotels, owner of budget-friendly hostelries like Clarion and EconoLodge, recently commissioned a survey of 2,000 business travelers to gauge their habits and preferences while on the road. Among the findings: the nightcap—that evening libation over which so much business and (for better or worse) personal bonding has taken place for decades—doesn’t mean what it used to.

Fully half of the respondents to Cambria’s survey reported that they’re drinking less booze while they’re on the road and, among those who elect to partake, half are opting for lighter libations: a craft beer, for example, over a whiskey sour.

More surprising, perhaps, was the finding that many business travelers are happy to skip the lobby bar altogether. Seventy percent said that a “nightcap,” for them, means “anything” that chills them out after a day of working. Two-thirds even said they’d really rather just head back to their rooms instead of going to the bar downstairs.

Instead of sipping cocktails on those plush-carpeted preserves, just what would these guests rather be doing? Respondents mentioned things like taking a bath (60%), going to the gym (33%), or even ordering cookies and milk (30%.) 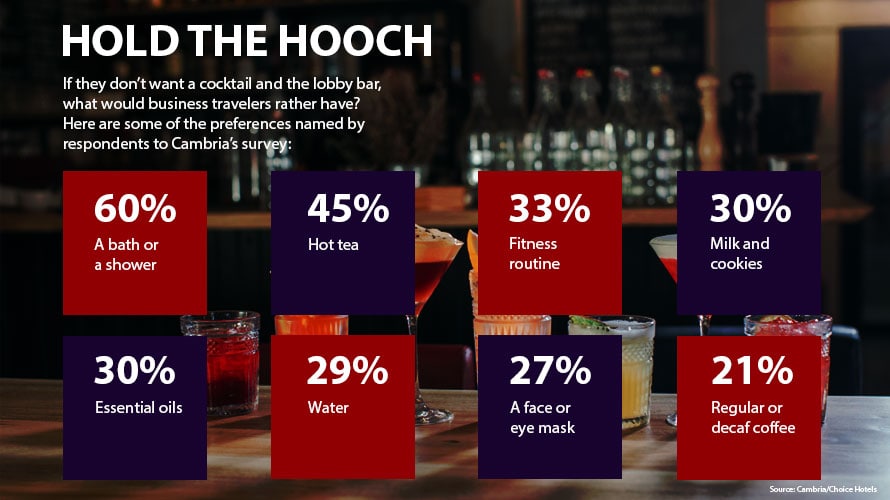 Cookies and milk? What’s happening here? Choice’s svp of upscale brands Janis Cannon explained that business travelers indulge as much as they always have, but “it’s just what they’re indulging in that’s shifting.” In response, Cambria has created a “Modern Nightcap” program for its properties in cities including Dallas, Pittsburgh and New York. It includes indulgences like a face mask or a choice of herbal teas.

Cannon is quick to add that drinking at the lobby bar has not fallen completely out of favor. “Travelers still frequent our bars,” she said. “We have a brand-wide local craft beer program that’s particularly popular. But, we’re always mindful of evolving consumer preferences, and as we observed the national shift in drinking habits among consumers, we thought we’d take a closer look at business travelers.”

Cambria’s findings do come at a time when Americans are increasingly laying off the sauce. Total alcohol consumption was down in 2018 for the third year in a row, the result of health and wellness practices and also, many suggest, concern over the relationship between drinking and sexual harassment.

Nevertheless, it’s not likely that hotel lobby bars will be shutting down anytime soon—or taking out their liquor shelves in favor of smoothie machines. A few years ago, Starwood surveyed 6,000 business travelers and found that close to 43% of them still considered meeting at the hotel bar with clients a favorite activity. And earlier this year, the travel site Fathom published a list of “12 Hotel Bars for Sealing the Deal,” a list that makes clear that lobby-bar power scenes at New York’s Baccarat Hotel and L.A.’s Chateau Marmont are alive and well.

What’s more, once you order your gimlets and sink into the leather chairs, odds are you’ll be keeping company with advertising executives. According to a study by Niznik Behavioral Health, marketing and advertising are among the top five industries for approved alcohol consumption.