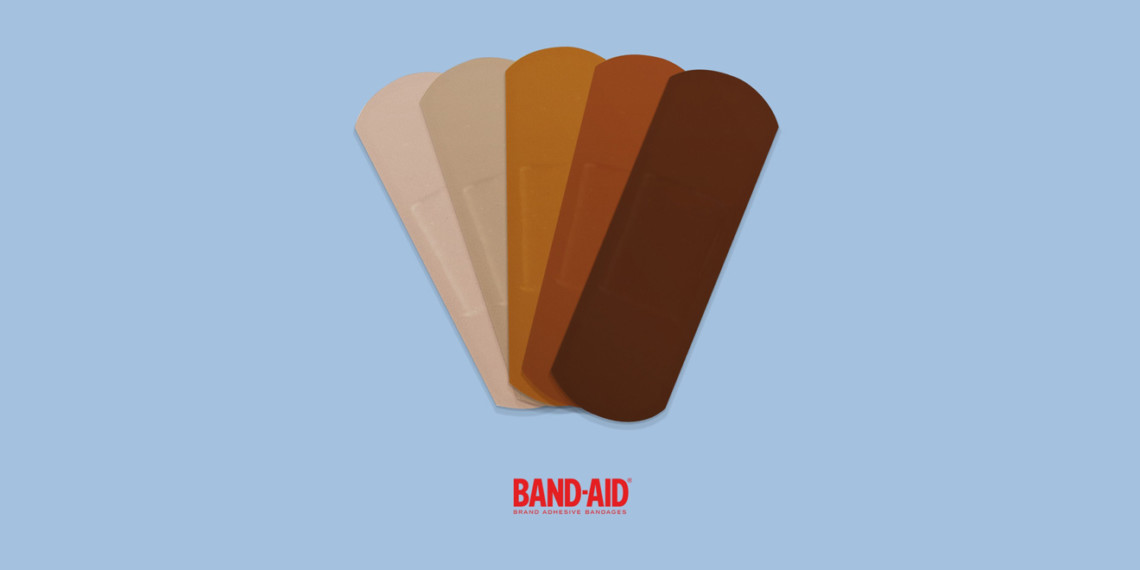 The Band-Aid brand said it will donate $100,000 to the Black Lives Matter foundation. - Credit by Johnson & Johnson

Johnson & Johnson brand Band-Aid, which was founded in 1920, announced this week that it will launch a new range of inclusive bandages that don’t just match white skin. The announcement was made via an Instagram post on Wednesday.

“Band-Aid is dedicated to inclusivity and providing the best healing solutions in colors that recognize a range of skin tones,” said Megan Koehler, communications leader at Johnson & Johnson Consumer Health. “We’ve made a commitment to launch a range of bandages in light, medium and deep shades of brown and black skin tones.”

We hear you. We see you. We’re listening to you.⁣ ⁣ We stand in solidarity with our Black colleagues, collaborators and community in the fight against racism, violence and injustice. We are committed to taking actions to create tangible change for the Black community.⁣ ⁣ We are committed to launching a range of bandages in light, medium and deep shades of Brown and Black skin tones that embrace the beauty of diverse skin. We are dedicated to inclusivity and providing the best healing solutions, better representing you.⁣ ⁣ In addition, we will be making a donation to @blklivesmatter.⁣ We promise that this is just the first among many steps together in the fight against systemic racism.⁣ ⁣ We can, we must and we will do better.

Instagram/Bandaidbrand
The Band-Aid brand announced it will also donate $100,000 to the Black Lives Matter foundation. Parent company Johnson & Johnson said on June 2 that it plans to allocate $10 million over the next three years to fight racial injustice in America.

The 100-year-old brand has come under criticism over the years for marketing its ubiquitous product in shades that only match very light skin colors. Frustration among communities of color led to competitive marketing from challenging brands like Ebon-Aide, Browndages and Tru-Colour.

In 2005, said Koehler, Band-Aid launched a line with multiple skin tones called Perfect Blend, but the product was later pulled “due to lack of interest at the time.” Koehler also pointed to the brand’s Clear Strips line of transparent bandages, launched in the 1950s, which are “designed to be used by people with a variety of skin tones.”

But while Band-Aid said it didn’t have enough demand to keep the Perfect Blend product on shelves, there was enough demand for two companies to quickly corner the market. Tru-Colour kicked off with an Indiegogo fundraising campaign in 2014. The brand was founded by a white father of multiracial children who said he had grown frustrated with kids bandages that “only match one type of skin tone.”

YouTube/Tru-Colour Bandages
Tru-Colour has a full line of products that include kinesiology tape and apparel, and its bandage line is sold at Target and Meijer stores. On Thursday, the brand posted a tweet that seemed to be aimed directly at Band-Aid, reading “imitation is the sincerest form of flattery.”

Imitation is the sincerest form of flattery, & we are encouraged to see other corporations jump into this market. Since 2014, we have been dedicated to diversity in healing, believing in the beauty of who you are. #skintones #diversity #diversityismorethanatrend #bandages pic.twitter.com/9AzWbE0RZf

Twitter/Tcbandages
Tru-Colour did not immediately respond to a request for comment.

In late 2018, a Black Muslim family also launched a line of multitone bandages called Browndages. In a 2019 interview with the media company Carvd N Stone, Intisar Bashir said she and husband Rashid Mahdi launched the brand without concerns about industry saturation.

Instagram/Browndages
Geared toward children, each case of Browndages features a group of kids dressed for the careers they aspire to. The illustrated kids—such as “aspiring pilot” Zayn and “future chef” Nailah—also decorate the backs of the bandages.

Browndages did not immediately respond to a request for comment, but in the Carvd N Stone interview, Bashir said the family-run business ships each order by hand, often enlisting the help of the couple’s two children.