Plus, Olay will stop retouching ads by end of 2020 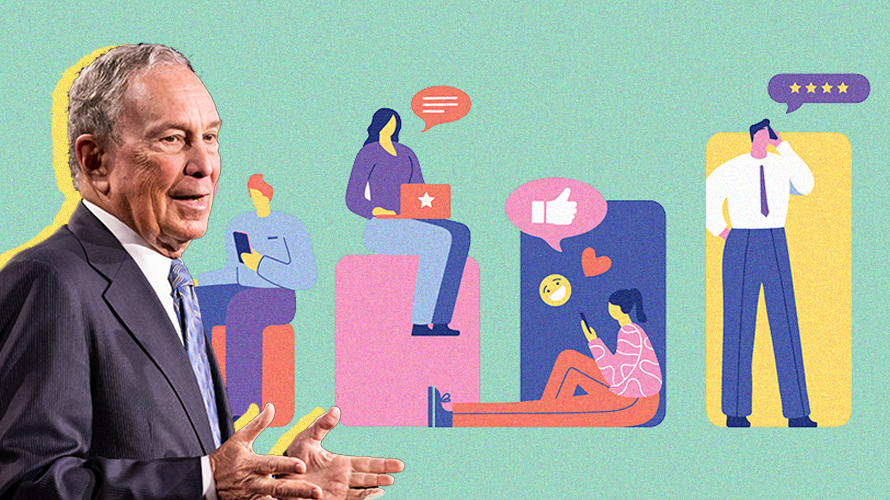 Over 500 “deputy field organizers” are being hired to recruit, train and activate friends and family in their networks to support Bloomberg.
Getty Images
Share
By Jess Zafarris
|
February 20, 2020
Share

The campaign for Democratic presidential candidate Michael Bloomberg is taking advantage of the billionaire’s vast financial resources by paying more than 500 people in California to support his candidacy via social media posts and text messages to their friends. The effort, which came ahead of Bloomberg participating in his first Democratic presidential candidates debate in Las Vegas Wednesday night (which didn’t go so well for the billionaire), could wind up costing millions of dollars.

In the meantime, his campaign has been hammering away at social media. The rise of the candidate’s meme army is a continuation of his social media strategy, which included teaming up with Meme 2020, a group of high-profile meme accounts led by Jerry Media’s Mick Purzycki, on an Instagram meme campaign earlier this month.

Read more: Learn about the strategy behind the campaign, and why it’s impacting the way social media content is handled.

Burger King made a bold and disgusting splash on Wednesday with the release of its “Moldy Whopper” campaign intended to highlight the fast-food brand’s commitment to dropping all artificial preservatives. We followed up with Fernando Machado, global CMO of Burger King, to learn about the counter-intuitive concept’s path from pitch to reality. It turns out that—not one, not two, but three agencies independently pitched variations on the rotten concept, and rather than pitting the vendors against each other to see who would come out on top with the best (not to mention safest and cheapest) execution, Burger King decided that all three agencies would get the credit.

Read more: Find out why the brand is “comfortable with being uncomfortable” and how the campaign came together.

Olay, the skincare brand owned by Procter & Gamble, will no longer retouch photos in its advertisements, it announced today at an event in New York. The plan is to end all retouching in Olay’s advertising imagery—in print, digital, TV and out-of-home—by the end of 2020. Coinciding with the announcement is a release of a new campaign, “My Olay,” created by Badger & Winters (the agency behind Olay’s space-themed Super Bowl spot and its “Face Anything” campaign) and starring Denise Bidot, Lilly Singh and Busy Philipps. Part of the change includes a “Skin Promise” seal, which will denote when one of Olay’s images hasn’t been retouched.

Read more: The decision will impact the way Olay and its partners create ads in more ways than you might realize.

Authentic Brands Group’s acquisition of Forever 21 is the latest in a series of deals that have transformed Authentic Brands into the second largest brand management company in the world, behind only Walt Disney. The $81 million transaction increases the company’s annual global retail sales by nearly 20% from over $10 billion to over $12 billion. In the past 12 months, ABG has scooped up well-known brands including Barneys New York and Sports Illustrated, adding to a stable that already includes Juicy Couture, Frederick’s of Hollywood, Nine West and Aéropostale as well as the likenesses of celebrities like Marilyn Monroe and Shaquille O’Neal.