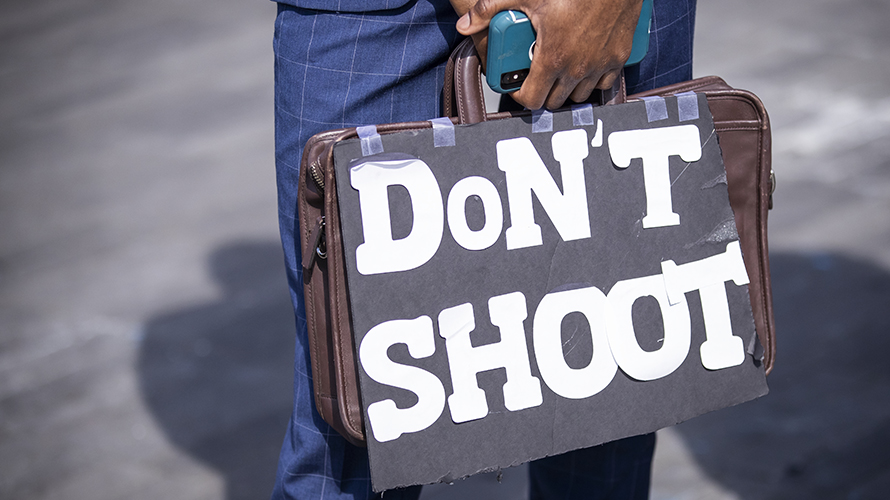 A man in Brooklyn on May 30 takes part in one of many protests against police violence after the death of George Floyd. - Credit by Getty Images

When Missouri teenager Michael Brown was shot by police in 2014, protests erupted across the country, and the #BlackLivesMatter movement was born. When New Yorker Eric Garner was killed by police later that year, a video of him struggling and saying “I can’t breathe” 11 times—before slipping unconscious, and later dying, went viral.

At the time, few corporations spoke out in support of the Black Lives Matter movement or in opposition to police killings of black Americans. But as similar protests took hold of the country again over the past week in response to the police killings of George Floyd, Breonna Taylor and Tony McDade, within days, many of the biggest global U.S.-based brands issued statements in solidarity with the black community.

"They're telling brands, you have to do more, you have to change the situation."
—Lewis Williams, CCO, Burrell Communications
Lewis Williams, CCO and evp at Chicago’s powerhouse multicultural marketing firm Burrell Communications, cited numerous reasons for brands’ sudden willingness to join forces with protesters. Williams said that when it comes to the relationship that younger generations have with brands, “everyone’s expectations have increased. “

“They’re holding brands accountable,” Williams said. “It used to be OK just to say, ‘Oh that’s so bad.’ But now that’s not enough. They’re telling brands, you have to do more, you have to change the situation.”

It’s true that up until now, any brand speaking out against racial injustice was an outlier. When Nike made former San Francisco 49ers quarterback Colin Kaepernick the face of its ad campaign in 2018, it was a risky move and one the brand took heat for, due to Kaepernick’s kneeling during the national anthem to raise awareness of police violence against black Americans.

But today, with many companies—and wealthy celebrities—issuing blunt statements against racism on social media, many equality advocates online are responding with three simple words: “open your purse.”

https://twitter.com/divanificent/status/1267015118392561669
Some major brands have already stepped up to the plate, backing up their statements of support with actionable plans for contributing to the black community’s fight for justice.

On Friday, YouTube pledged to donate $1 million “in support of efforts to address social injustice.”

We stand in solidarity against racism and violence. When members of our community hurt, we all hurt. We’re pledging $1M in support of efforts to address social injustice.

And on Sunday, luxury makeup brand Glossier announced it would split $1 million between two efforts: $500,000 going to racial justice groups like Black Lives Matter, and another $500,000 going into grants for black-owned beauty businesses.

Brands have to offer something measurable, said Williams, because today’s consumers expect more than just words—especially after the way brands responded to the Covid-19 pandemic by throwing millions of dollars in donations at various communities.

Williams said the criticism and anger aimed at brands and influencers that do little beyond offering words of support stem not just from rage and grief over the crisis of police brutality, but also from the powder keg created by unprecedented mass unemployment and pandemic stress.

“‘Coronavirus is killing me, I don’t know if I have work, and it just erupted,'” said Williams, emulating how many consumers feel. “And there’s no leadership in this country right now, and people are really looking for a leader…so we’re looking at brands. Who can I turn to for help?”

But as people turn to brands for leadership, they aren’t satisfied with reassuring tweets alone. When Amazon posted a statement on its social media channels saying it “stand[s] in solidarity with the black community,” former employee Chris Smalls—famously fired after helping organize a picket over unsafe pandemic working conditions—pointed out the irony.

“It’s extremely insulting on the day where they took away the $2 ‘hero pay,’ which affects the black and brown employees directly who make up a majority of their workforce,” Smalls told Adweek on Sunday. “It’s disgraceful for them to even say such a thing when they oppress their own workers of color. Everyone that was fired over the last two months was black or brown or women with the exception of Emily Cunningham and Maren Costa, who were fired because they stood with us in solidarity.”