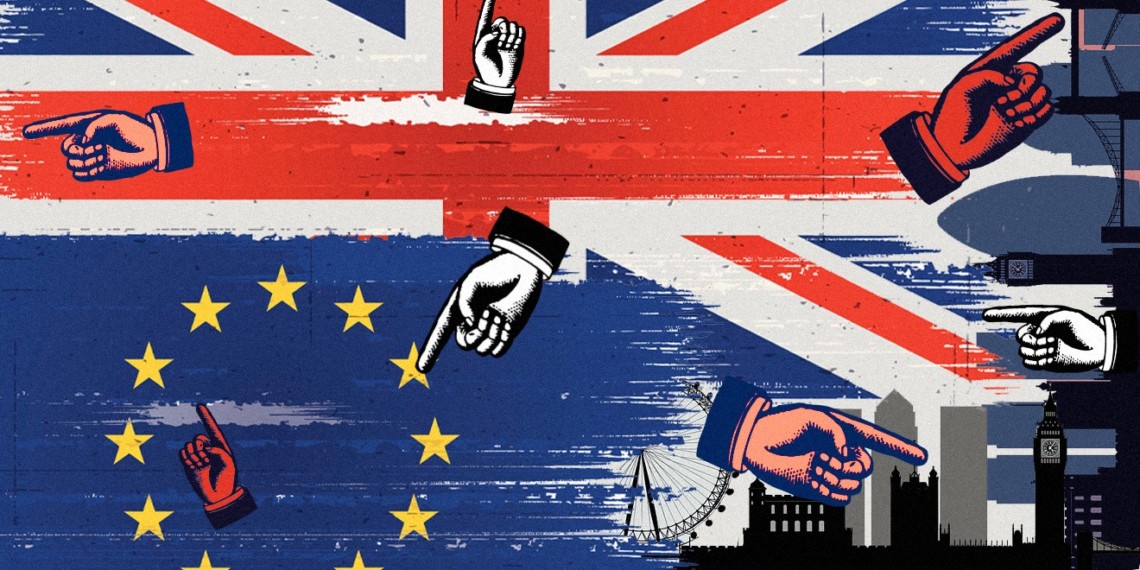 The Oct. 31 Brexit deadline has been looming over the United Kingdom for months, like a coven of witches flying across the silhouette of a full moon.

Since March 29, when the U.K. missed its first planned departure date from the European Union, all eyes have been on Halloween, when the country’s much-anticipated departure from the continent was supposed to happen.

That was until Oct. 28, when European Leaders approved yet another extension, this time until Jan. 31, 2020—three years, seven months and eight days after the June 23, 2016 referendum that set Brexit in motion. (At that time, experts said it would take at least two years for the U.K. to officially leave the EU.)

The referendum produced a close result, with 17.4 million (51.9%) voting to leave the European Union, and 16.1 million (48.1%) to remain—with the identity of Leaver or Remainer having become a characteristic that speaks volumes about the person who holds it.

Westminster, the U.K.’s seat of power, has been paralyzed since the vote. The political upheaval has been practically nonstop: a change in prime minister; a suspension of parliament, and then a ruling that the suspension was illegal; a new Brexit deal, which failed to pass—and that’s just the major moments.

While the British Home Office has been advertising across the country for people to “prepare for Brexit” on bus shelters, billboards, the Tube and promoted tweets, the constant turmoil has made doing just that quite the challenge—particularly for businesses, among them marketing and advertising.

“Brexit knocks confidence,” said Ben Golik, chief creative officer at customer agency Lida. “It creates a culture of uncertainty. Any business that trades in confidence, as we do in marketing and advertising, is directly affected.” 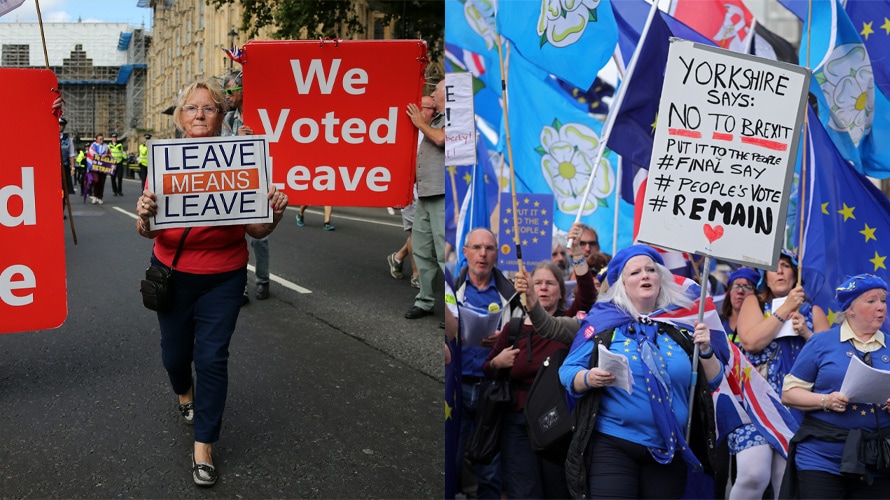 Brexit has brought protests to the streets of the U.K., from both leavers and remainers

How can companies prepare for an uncertain Brexit?

Brexit will surely have far-reaching consequences—but without knowing exactly what those will be, companies have found it difficult to prepare. In September, the Institute of Directors (IoD), a long-running organization for senior U.K. business leaders, published a survey on corporate preparedness for Brexit. Over half of the respondents from small (0-49 employees), medium (50-249) and large (over 250) companies all said that they had “done as much preparation as we can, but cannot be fully prepared” for Brexit.

But even before it’s happened, companies from banks to retailers and advertisers are already feeling the effects: quick-service bistro Pret a Manger and luxury clothing retailer Ted Baker blamed public uncertainty over Brexit for lessened spending in recent months, and women’s clothier Bonmarche cited it as a factor when the company went into administration (bankruptcy), according to Bloomberg. Barclays CEO Jes Staley said in a post-results call that the “macroeconomic uncertainty” of Brexit was a primary reason why the bank would have a hard time meeting some targets. And this all comes just after U.K.-based businesses have had to overhaul their digital presence to account for the EU-directed GDPR.

“People are trying to prepare, but they don’t really know what to prepare for,” Johnny Hornby, chairman and CEO of London-headquartered ad agency The&Partnership, told Adweek. “Every day, it seems in Europe, something happens and you couldn’t believe the day before that it would have happened, but it has.”

This has caused the British public, from companies to citizens, to prepare for every possible outcome. That includes the so-called hard Brexit, which means the U.K. would leave the EU without a deal in place, leaving free trade with Europe in question. Without any official proclamations, operations have gone on as usual, but the cloud hanging over everyone’s head brings its own damage.

“The physical component of Brexit hasn’t touched us yet,” said Giles Gibbons, CEO of London-based strategy consultancy Good Business. “I think the psychological one is the bit that is affecting most businesses and brands. That is a personal thing as much as a business thing. It’s seeded some doubt, and the chaos has meant that people are finding it increasingly difficult to make decisions.” 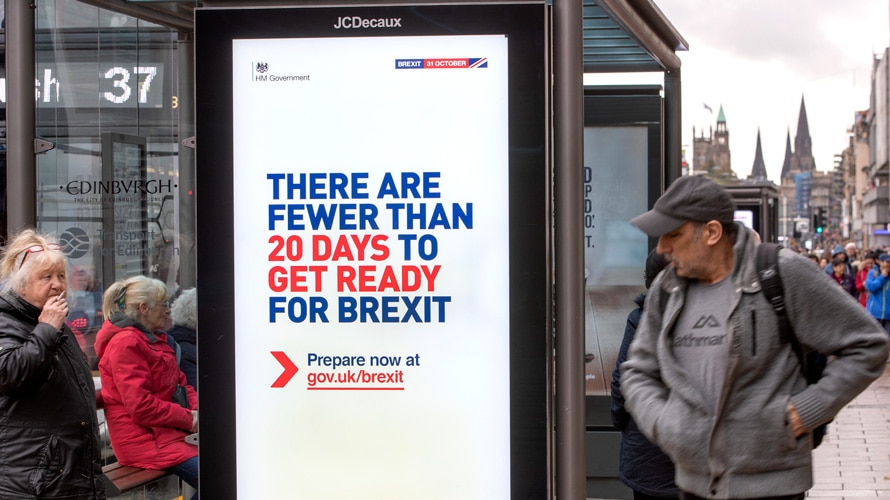 Advertisements instructing people to "get ready for Brexit"

Wariness of taking any steps

The political—and psychological—purgatory that the U.K. has found itself in has seeped into all aspects of life, including business. In advertising, that’s meant a reluctance on the part of clients to make new investments.

“When we have uncertainty in the market, clients aren’t placing big bets or making big changes,” Golik said. “And that’s obviously had an impact on the agency world.”

Add to that the fact that many in the industry weren’t hoping for Brexit to begin with: Advertising in the U.K. is by and large based in London, a city that overwhelmingly voted to remain in the E.U. in the 2016 referendum. That mindset is reflected in the industry, said Paul Smith, the director-general of Incorporated Society of British Advertisers (ISBA).

“Certainly in the advertising community, there are some who’ve said they are pro-Brexit,” he said. “But if you look across our community as a whole, they would largely be in the camp of Remainers who have become Reluctant Leavers, wanting to see it happen in as managed a way as possible.”

Ad spend in 2019 was predicted to grow by only 4.6%, compared to 6.2% growth in 2018, according to a quarterly expenditure report from the Advertising Association, the U.K. trade group representing the country’s advertising industry, and media analysis firm Warc. However, the fact that there’s growth at all, according to Stephen Woodford, CEO of the AA, is a “testament to the resilience of UK advertising during an uncertain period for business.”

Among agencies themselves, anxiety levels differ depending on who their clients are, according to Hornby. Certain industries, like autos or pharmaceuticals, that rely on the ability to easily import and export from continental Europe, may feel a greater hit. That’s particularly true if there is a hard Brexit. “Manufacturing that used to flow freely across the Channel would [stop],” he said. “Now, suddenly every train and boat and whatever they use to cross borders without any interference would suddenly have to be stopped, opened up and tracked.” 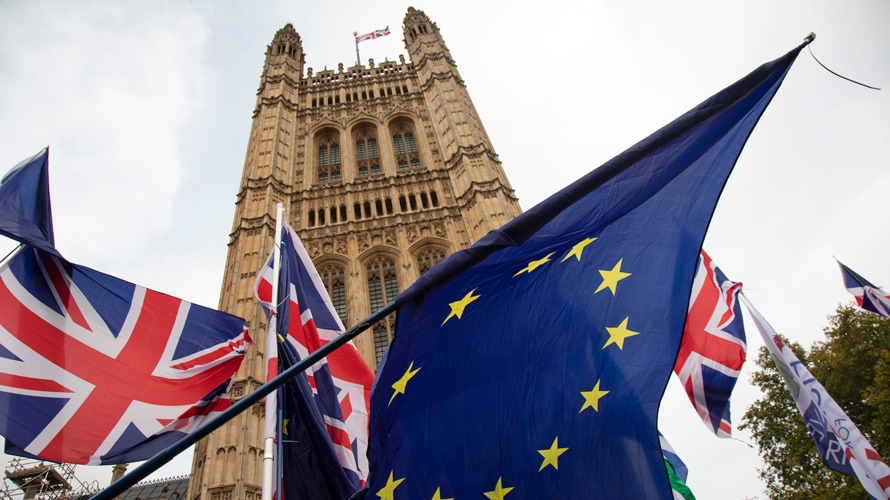 For agencies, how Brexit will play out for their clients’ process is what really matters.

However, Smith said that for many U.K.-based agencies, particularly larger ones like WPP, Brexit has not shaken their view of themselves as a “creative beacon” that will retain an ability to win global business even in a post-Brexit era, particularly because they’re global businesses with offices outside of the U.K.

But even without knowing what’s exactly going to happen, businesses have been able to look at the potential outcomes and make a plan. One of the biggest concerns for companies that also operate in Europe is exporting will become more expensive post-Brexit, with new tariffs popping up if free trade isn’t retained.

“Two years ago when we could see this on the horizon, we took the decision—which was seemed overly cautious at the time—to incorporate boards and set up companies in every European country in which we operate,” Hornby said of The&Partnership’s preparations for Brexit. “We will no longer be an exporter to those markets because we have a board, a company, and we trade in the Euro. So we are not worried about what happens to being a U.K. exporter, because we’re not an exporter. We’ve become corporations in 19 European countries.” 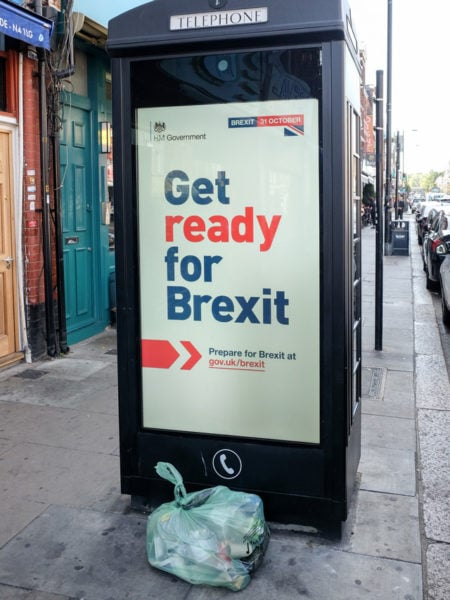 Consumers and companies alike are preparing for Brexit's eventual effects

Actions like these help inspire confidence in a post-Brexit future—a task Golik said agencies, in particular, need to take on during this time. His agency, Lida, recently introduced a line of products to help marketers prepare for Brexit that includes advice like updating communications to inform customers of potential product delays or unavailabilities.

Lida also provides counseling for marketers, helping them realize that though they may have voted to remain, half the country didn’t—and companies need to tread lightly.

“We started wondering about that gap between your marketing department and your audience or your natural biases,” he said. “You want to understand that gap and make sure that in communications that businesses are putting out, if they’re taking a political stance, they understand how aligned or misaligned it is with their audience.”

He also noted that agencies are in a unique position, as they not only have themselves to think about but their clients, too, whose success is tied to their own. With this relationship, the key is to embody the confidence that others might be lacking, reassure clients and help them get ready for a future that will undoubtedly have bumps, but ones they can’t overcome.

“In a time where the only thing that unites Leavers and Remainers is a mutual sense of uncertainty, anything we can do for brands and clients to create certainty is welcomed,” he said. “Your supply chain might get broken and your customer journey might be affected. But how can we get on the front foot with that now to make sure that your brand is out there with a message of reassurance, confidence and positivity?”

“As divisive as Brexit is in the U.K., we can’t be divisive for brands,” he added. “We’ve got to make sure that the brands that we work for and reflect are in a position where they can talk confidently and positively and with certainty in the market.”

A threat to London’s place in the ecosystem

What Brexit threatens is not just stability, but the position of the U.K.—and specifically, London—as a global industry hub, the “gateway into Europe,” as Golik put it. As an island that sits between North America and continental Europe whose people speak the same language as Americans, the U.K. is a direct connection to the U.S. But leaving the European Union opens a path for cities like Paris or Amsterdam to take that title.

In the days immediately following the referendum, chatter grew that London-headquartered businesses may flee to cities in the E.U. (According to the IoD’s survey, 15% of businesses surveyed are either planning on or actively considering such a move.) And while Smith said he doesn’t believe that idea has taken hold in a meaningful way in the advertising industry, Gibbons said he’s seen companies, including Good Business’s own clients, moving to other countries ahead of Brexit. 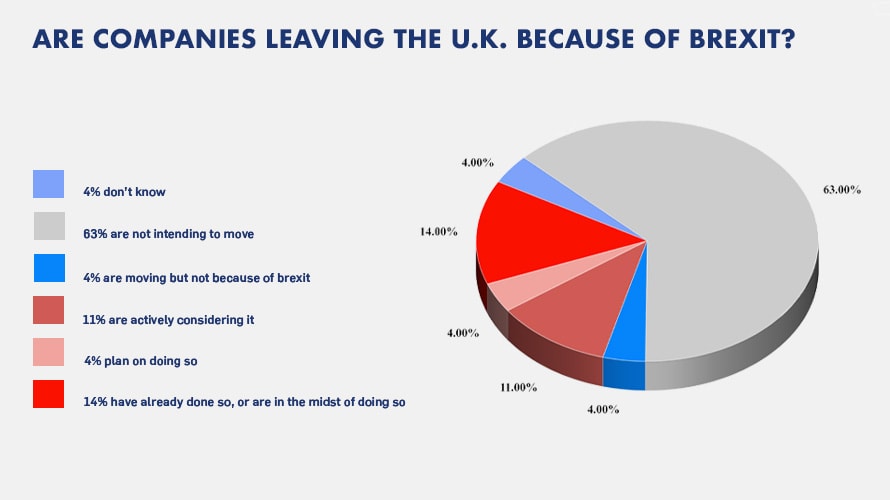 Another concern? That even if people want to come to London, they won’t be able to. Most companies, not just marketers, are grappling with how Brexit will impact their ability to recruit top talent from across Europe. One of the most hotly debated elements of Brexit has been the European Union’s freedom of movement policy, which allows people from all across the continent to move to a different EU member country without the need to formally apply for a visa, giving European citizens greater options for where to live and build their careers. (Think of it as similar to how someone who is born in Wisconsin can easily move to New Jersey.)

“Anything that impacts the attractiveness of London as a place to work is something the industry would worry about,” said Smith, though he admits that the existing environment in London will continue to be a draw. “The combination of tech and creativity that comes together here is one that certainly wouldn’t change overnight.”

Perhaps it’s inevitable that something of a standstill will continue as long as the debates in Parliament stretch on. If even Boris Johnson doesn’t know what the next day will bring, how can marketers, brands and agencies?

“Right now, no one knows anything.”