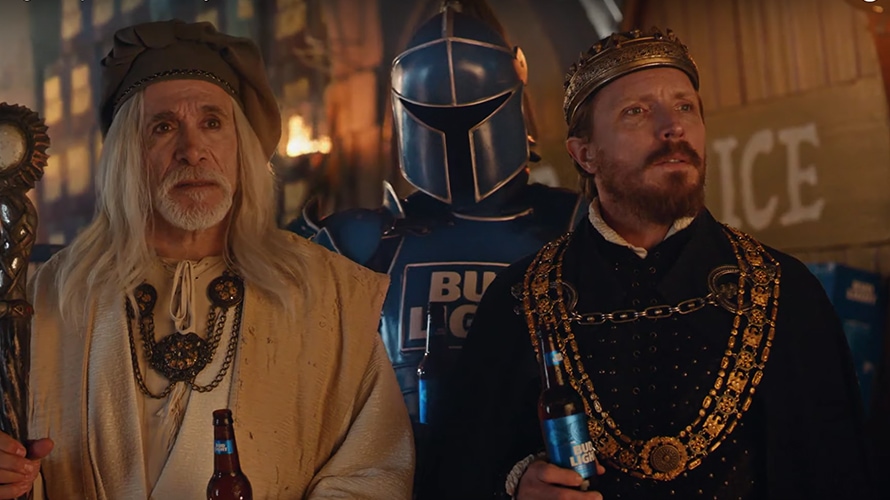 Bud Light used its first 60-second Super Bowl spot to troll some of its fellow light beer friends. Calling on the brand’s now famed medieval cast of characters, including the king and the Bud Knight, Bud Light called out Miller Lite and Coors Light for using corn syrup.

The medieval crew embarks on a dangerous journey to the castles of Miller Lite and Coors Light to complete a very important task. They must make a delivery, a “special delivery,” in the form of giant cask of corn syrup to these faraway lands, because Bud Light’s kingdom received this shipment by mistake. Bud Light, we learn, doesn’t use corn syrup in its brew, but these other beers do.

Fans of the campaign will note that the slogan “Dilly Dilly” will not be tossed around in this Super Bowl spot.

“Dilly Dilly was a big piece of our medieval world and really helped us break into culture last year,” explained Andy Goeler, vp of marketing for Bud Light. “We figured what a great opportunity to continue to use the medieval world with a fun approach, and in a fun way let people know about what is in our beer and what’s not in our beer and introduce this concept of ingredient transparency.”

The campaign follows up on the brand’s recent announcement that Bud Light will begin putting ingredient and nutrition labels on all of its packaging. While the kickoff of the campaign focused on the ingredients that are used to make Bud Light (water, barley, rice and hops), these new spots will focus on what is left out of the beer—mainly corn syrup, and artificial flavors and preservatives.

It’s unclear whether or not the brand clued its competitors in on the mention in this 60-second spot, which is running during the first quarter of the game. Goeler noted that his concern isn’t so much for the other brands but about the Bud Light brand. “We think Bud Light, as the leader in this category, needs to make a bold move,” he said. “Starting to talk about ingredient transparency will help elevate beer as a category and hold us to a higher standard.”

Two additional ads highlighting the brand’s transparency play, aired during the third and fourth quarters of the game. Both are 15-second spots.

Bud Light will have several other spots in the game. We will update this post as those ads air.