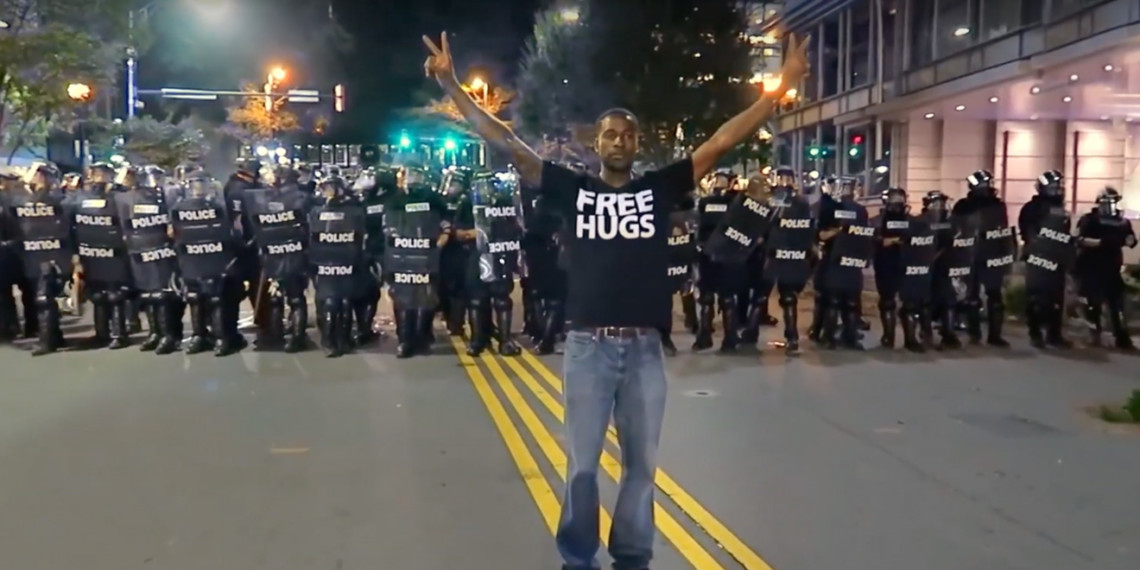 Ken E. Nwadike Jr., a peace activist known as the Free Hugs Guy, is one of the many Americans featured in Budweiser's Super Bowl 2020 ad. - Credit by Budweiser

Budweiser released its 60-second Super Bowl 2020 commercial, “Typical American,” this morning ahead of the Big Game.

The tear-jerking, patriotic spot directed by Oscar-winning filmmaker Kathryn Bigelow and produced by agency David Miami, challenges stereotypes about Americans to remind viewers that the nation’s spirit lives in the extraordinary actions of ordinary people.

Though some are not wild about brands that choose to reveal their Super Bowl spots—or even tease them—prior to the Big Game (as voiced by participants in this week’s installment of #AdweekChat on Twitter), Budweiser vice president of marketing Monica Rustgi explained that the brand wants to start a conversation about the American spirit before the San Francisco 49ers and Kansas City Chiefs duke it out on the field at the Hard Rock Stadium in Miami Gardens, Fla.

“2020 is a year where we have the Olympics ahead of us, and the elections ahead of us, and so we wanted to invigorate everyone to come together [and] realize their potential as Americans, all while enjoying a refreshing, cool Bud,” Rustgi said.

The Bigelow-directed ad intertwines images and clips of daily, intimate moments with inspiring viral acts of humanity, juxtaposing them against some of the most common labels and stereotypes placed on Americans: We’re showoffs, we have no sense of personal space, we’re competitive, we’re rude, we’re immodest, we’re loud, we think we can save the world, and we’re always celebrating with the “typical American beer” (in this case, that’s Budweiser).

In a teaser released Tuesday, Budweiser revealed some stars of the commercial including Ali Krieger and Ashlyn Harris, recent FIFA Women’s World Cup champions and newlyweds; Ken E. Nwadike Jr., a peace activist known as the Free Hugs Guy; U.S. Army Sgt. Mason Miller and his dad, Bernie, a doctor from Tempe, Ariz.; and Hannah Gavios, the marathon runner who was partially paralyzed after falling off a cliff to flee an assailant.

Other “stars” are average Good Samaritans: one who helps push a car to safety during a blizzard, another who literally takes the shirt off his back and gives it to someone on a train, and a firefighter.

“We wanted to flip these labels on their head and highlight the powerful, everyday moments, both large and small. … We wanted to show extraordinary efforts and feats, defying what is expected of [Americans], and show the result of people coming together,” Rustgi said.

Another thing Budweiser hopes to redefine with its Super Bowl spot? Who reaches for a Bud.

Eagle-eyed viewers will catch that the logo is now an updated version of the pale lager’s 1970s packaging in hopes of making the brand more appealing to younger consumers who have embraced retro fashion, proudly sporting vintage Budweiser apparel.

“We went with our gut and tested out this theory. We were pleasantly excited that across the board, our younger drinkers and our existing core drinkers like the evolution,” Rustgi said.

“Budweiser is proud of its recipe, process and the people behind the beer since 1876,” said Ricardo Marques, vp of marketing for core and value brands at Anheuser-Busch. “Our Great American Lager is an icon, and we want the next generation to take a fresh look at us and when they do, they’ll be surprised by what they find.”

Per Rustgi, the brand also wants to use the refreshed design and the Super Bowl campaign as a way to remind people that the beer is brewed, canned and bottled in the United States. “It’s really important to us, as America’s beer, that we represent how diverse the country—and our beer drinkers—are,” she said.

“Typical American” will officially debut during the fourth quarter of Super Bowl 2020.

For all the latest Super Bowl advertising news—who’s in, who’s out, teasers, full ads and more—check out Adweek’s Super Bowl 54 Ad Tracker. And join us on the evening of Feb. 2 for the best live coverage of Super Bowl commercials anywhere.