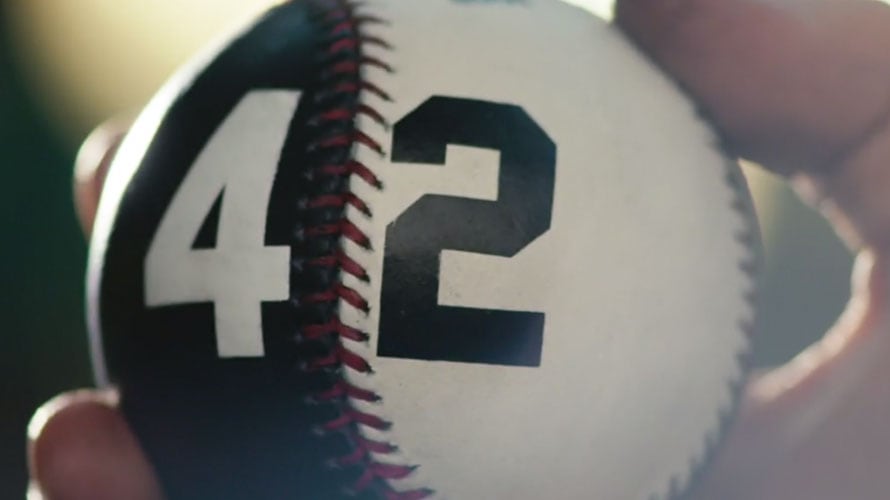 The black-and-white baseball from Budweiser's "Rise" is supposed to signify the inclusivity of baseball following Jackie Robinson's career. Budweiser

While Lee and Sharon Robinson don’t return for the follow-up, Budweiser is quickly building on its first ad with the comparatively minimalist “Rise.”

Set to “Rise Up” by Andra Day, the ad documents the process of a man stitching together a Jackie Robinson commemorative baseball before concluding with footage of Robinson in action and the message, “This one’s for you, Jackie.”

The spot, which was created by a Dentsu Aegis Network team led by Vizeum U.S. and Isobar Brazil, debuts today as a 30-second broadcast ad, which will run through Jackie Robinson Day on April 15. A 60-second version will also run in ballparks for Jackie Robinson Day, and both versions will be featured on digital and social platforms.

“Jackie Robinson changed the sport and cultural landscape of this country by breaking the color barrier in professional baseball and ‘Rise’ is a metaphor for that impact through the interlacing and construction of the black-and-white ball,” Ricardo Marques, group vice president, marketing for core and value brands at Anheuser-Busch told Adweek.

Marques said the reaction to the campaign’s launch spot “Impact” was “phenomenal,” from the “baseball community and beyond.”

“‘Rise’ continues to celebrate Jackie’s story, unpacking his achievements and exploring ideas of inclusion, diversity and unity,” he added. “Budweiser wants to remind this country that we can all live with impact, and ‘Rise’ continues to draw on our emotions and inspire us through the legacy of Jackie.”

He explained that the brand chose to quickly follow-up the campaign’s launch ad in order to “maximize the period within which we can celebrate this American hero” in the lead-up to Jackie Robinson Day on April 15, when it plans to raise a Bud in his honor through a series of initiatives.