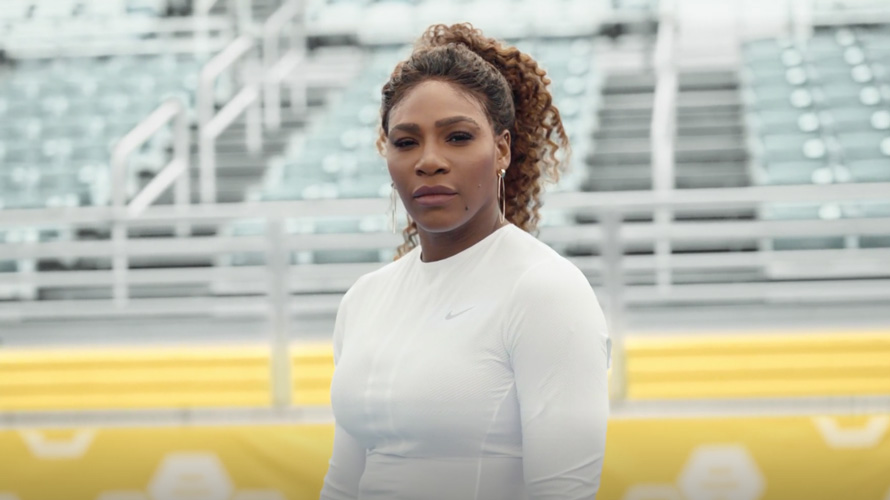 Putting Serena Williams as the spokesperson for the brand's inaugural Super Bowl spot was very much an intentional move by Bumble. - Credit by Bumble

Here at Bumble, we try not to do anything halfway. When we first thought about outreach to sports fans, we didn’t buy banner ads on a basketball website. Instead, we entered into a groundbreaking partnership with the Los Angeles Clippers, becoming the first women-focused brand to see its logo on a major professional sports team’s jersey.

The same can be said for our first foray into TV. We’re a mobile-first dating and networking app, at the time just four years old. We’d never aired a commercial in the U.S. before. So why not start big with a spot during the first half of the Super Bowl?

We approached the creation of this ad with our founding mission of advancing gender equality by allowing women to make the first move firmly in mind. There was only ever one potential star: tennis icon Serena Williams, the greatest athlete of our time and the living embodiment of Bumble’s message. She’d never waited for permission in any part of her life, on or off the court, and she’s been an outspoken activist for equality, both for women and underrepresented groups.

Once we’d secured Serena’s involvement, we intentionally built a team of mostly women to create our commercial. For us, it wasn’t a gimmick, but a necessary rejoinder to a day of television dominated by men—and we don’t just mean the athletes competing in the Super Bowl. According to Free the Bid, a nonprofit advocating on behalf of women directors in advertising, there were only four women directors hired for the Super Bowl in 2018, none of whom were women of color. In contrast, there were 42 male directors working on campaigns for the biggest day in sports.

To direct our ad, we looked to screenwriter and director A.V. Rockwell, whose previous work focused on issues of race, identity and systematic oppression. She’d won a Clio for The Gospel, a short film she directed starring singer/songwriter Alicia Keys.

We shot the commercial, part of a multi-platform campaign called “The Ball Is in Her Court,” over the course of a day near Serena’s Florida home. Our team on set knew we had something special on our hands. On the day of the Big Game, employees at our Austin HQ gathered excitedly, waiting to see what would be the first-ever Super Bowl ad made by a majority-women team. A cheer went up as Serena’s strong, powerful voiceover signaled the start of the ad.

“The world tells you to wait,” she says. “That waiting is polite and good things will just come. But if I waited to be invited in, I never would have stood out.” The spot shows Serena making the first move as a young girl, joining a tennis competition then, later in life, winning countless tournaments and launching a fashion brand.

We expected some reaction to such an overtly women-first Super Bowl spot, but we could never have anticipated its reach. “The Ball Is in Her Court” garnered over 7 billion earned media impressions and 2.4 billion views on Bumble’s YouTube channel. It was the top-performing spot by interaction rate on Facebook, according to social monitoring service CrowdTangle. Across all our social channels, the ad has been viewed over 11.8 million times to date.

Bumble isn’t advertising during this year’s Super Bowl, but we certainly intend to look out for other iconic cultural moments to tell our brand story in a similarly direct, compelling way. What we learned from last year’s campaign is that there’s a great deal of value in sharing our mission and message, but that it absolutely matters who writes the script, who’s behind the camera, who’s onscreen and who’s leading the campaign. In this case, it was women, with women of color taking the lead as star and director.