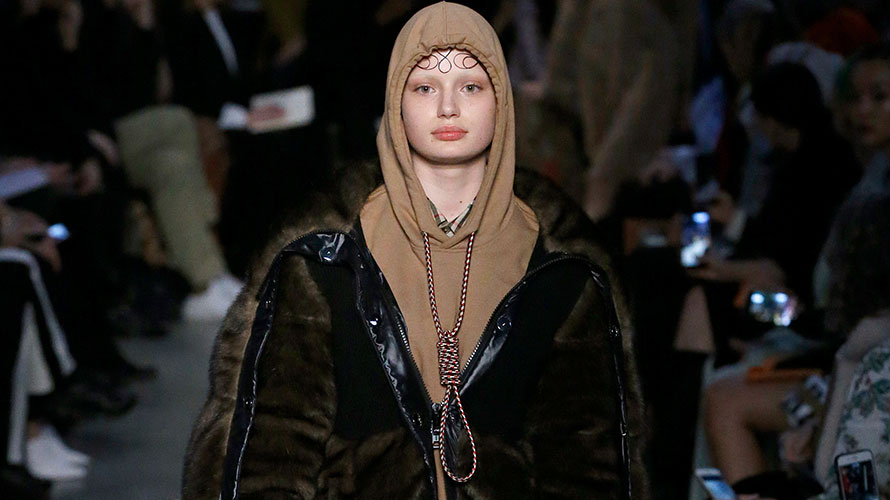 Burberry is the latest fashion house under fire for a controversial design the brand sent down the runway: a hoodie with what looked identical to a noose hanging around the neck in place of strings.

The brand stated the rope was meant to channel a marine theme used throughout the show, but people voiced objections to the design on social media. Some expressed concerns of racism, while others were concerned about the message it sent young consumers battling depression and other mental health issues. The item has since been removed from Burberry’s collection.

“We are deeply sorry for the distress caused by one of the products that featured in our A/W 2019 runway collection,” Marco Gobbetti, Burberry CEO, said in a statement.

Burberry CCO Riccardo Tisci echoed the apology, adding that “while the design was inspired by a nautical theme,” the piece was “insensitive.”

“It was never my intention to upset anyone Tisci continued. “It does not reflect my values nor Burberry’s and we have removed it from the collection. I will make sure that this does not happen again.”

Much of the discussion began after model Liz Kennedy, who wore the garment during the brand’s show at London Fashion Week, posted about her experience on Instagram. Kennedy shared that she raised concerns about the garment during a fitting, but that she was quickly dismissed and told to “write a letter” to express her concerns.

“How could anyone overlook this and think it would be [OK] to do this especially in a line dedicated to young girls and youth,” Kennedy wrote on Instagram. “The impressionable youth. Not to mention the rising suicide rates worldwide. Let’s not forget about the horrifying history of lynching either.”

@burberry @riccardotisci17 Suicide is not fashion. It is not glamorous nor edgy and since this show is dedicated to the youth expressing their voice, here I go. Riccardo Tisci and everyone at Burberry it is beyond me how you could let a look resembling a noose hanging from a neck out on the runway. How could anyone overlook this and think it would be okay to do this especially in a line dedicated to young girls and youth. The impressionable youth. Not to mention the rising suicide rates world wide. Let’s not forget about the horrifying history of lynching either. There are hundreds of ways to tie a rope and they chose to tie it like a noose completely ignoring the fact that it was hanging around a neck. A massive brand like Burberry who is typically considered commercial and classy should not have overlooked such an obvious resemblance. I left my fitting extremely triggered after seeing this look. Feeling as though I was right back where I was when I was going through an experience with suicide in my family. Also to add in they briefly hung one from the ceiling (trying to figure out the knot) and were laughing about it in the dressing room. I had asked to speak to someone about it but the only thing I was told to do was to write a letter. I had a brief conversation with someone but all that it entailed was “it’s fashion. Nobody cares about what’s going on in your personal life so just keep it to yourself” well I’m sorry but this is an issue bigger than myself. The issue is not about me being upset, there is a bigger picture here of what fashion turns a blind eye to or does to gain publicity. A look so ignorantly put together and a situation so poorly handled. I am ashamed to have been apart of the show. #burberry. I did not post this to disrespect the designer or the brand but to simply express an issue I feel very passionate about.

“The experience Ms. Kennedy describes does not reflect who we are and our values,” added Gobbetti. “We will reflect on this, learn from it and put in place all necessary actions to ensure it does not happen again.”

In the last few months, several fashion brands have been at the center of controversies surrounding insensitive designs. Gucci pulled a turtleneck sweater from the market after consumers complained that the item resembled blackface. A few days later, the brand released a statement explaining that it had a long-term plan in place to improve diversity and cultural awareness within the brand.

Gucci’s first four initiatives in a long-term plan of actions designed to further embed cultural diversity and awareness in the company.