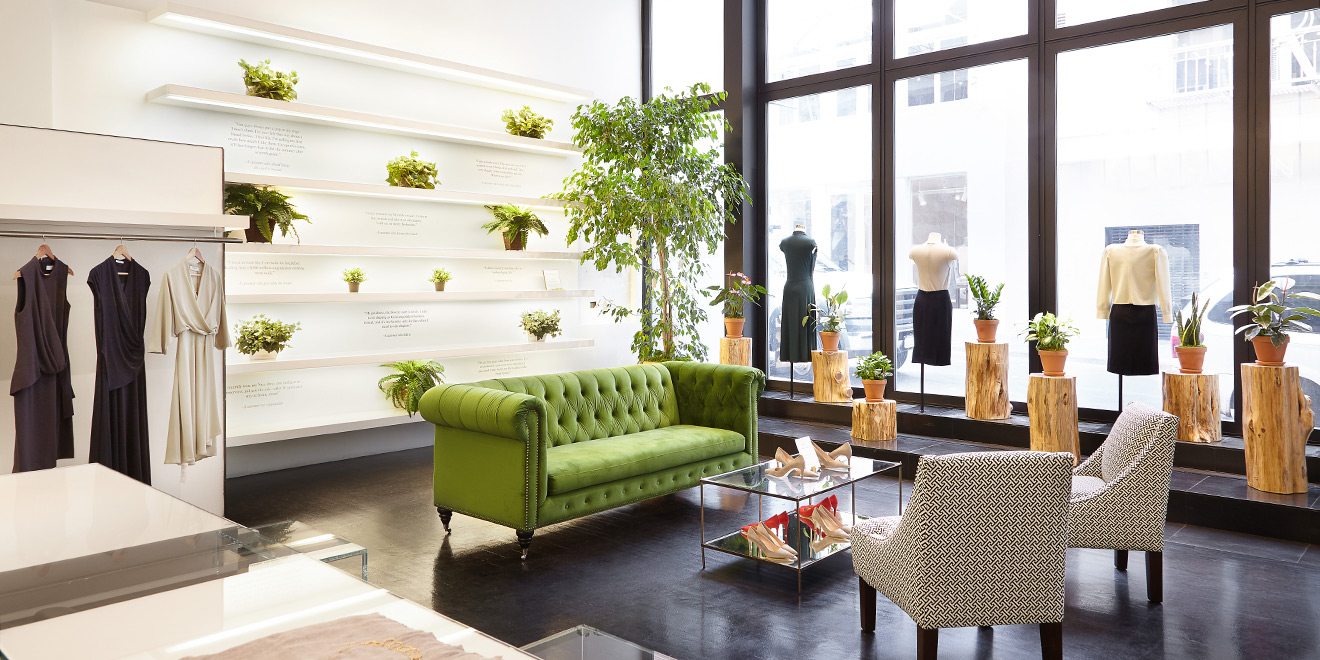 MM.LaFleur is an alternative to traditional clothes shopping and one of several showroom brands in its ascendancy. Courtesy of MM.LaFleur

If you want to buy some clothes at the posh MM.LaFleur in New York, you’ll be in for a few surprises. It starts with the location—611 Broadway is a trendy SoHo address, but there’s no visible clothing store there. Instead, a cavernous Crate and Barrel dominates at street level. To get to the store, you’ll have to take the elevator to Suite 401. Once you’re up there, another surprise awaits. There is, in fact, a clothing store, but one with no visible clothing.

The reception area’s white walls, bare plank floors and potted palm could well belong to a design firm or a pricey plastic surgeon’s office. And instead of a sales associate greeting you with retail’s usual plastic smile, the associates here already know your name, and they’ll hand you a flute of champagne and whisk away your cell phone for charging.

So, is MM.LaFleur a clothing store at all? Well, sure. But “store” doesn’t wholly convey what’s going on here. MM.LaFleur, which has grown to five locations nationally, is a showroom brand. People who visit consult one on one with stylists who bring out sample garments for them to try on. Once the selections are made, the shopper goes home empty handed. Instead, a few days later, her selections arrive by mail.

“This is a tranquil space, and it’s the most efficient 60 minutes of your life,” says company founder Sarah LaFleur. “My customer is a professional woman. She’s busy—midcareer and approaching executive level—and tends to be a mom with kids. She doesn’t have time to run into a department store.”

MM.LaFleur isn’t just an alternative to the traditional, often hectic realm of clothes shopping—it’s one of several showroom brands in its ascendancy. Having started about a decade ago with the rise of Warby Parker, showrooms (sometimes called “guide shops” or “fit shops”) have been quietly proliferating across the country.

They include shoe stores like M.Gemi and Paul Evans, which fit customers for high-end footwear that’s handmade in Italy and shipped directly to customers’ homes in the U.S. They include interior-décor companies like Restoration Hardware, whose opulent “galleries” across America let shoppers touch and feel and lounge in its luxurious furnishings, then go home and wait for their selections to be sent there. And they include apparel brands like MM.LaFleur, Bonobos and J. Hilburn—stores that, according to retail industry watchers, offer a viable alternative to the brick-and-mortar model that’s been taking gut punches from Amazon and other eretailers.

“We are definitely believers in the validity of this model,” says Melissa Gonzalez, founder of retail strategy firm the Lionesque Group. “The purpose of physical [stores] continues to evolve and, at the core of it, brands need to utilize physical [locations] to deliver something they cannot online.”

Reduced to its essentials, a showroom gives customers all of the touchy-feely advantages traditional stores always did. But because there’s little or no on-site stock—the shopper has to wait for his or her purchases to be prepared and shipped off—showroom brands have many operational and competitive advantages over yesterday’s brick-and-mortar outposts.

For example, showrooms save significantly on rent because they operate on smaller footprints. Ask Micky Onvural, CMO of Bonobos, an upmarket men’s retailer with 47 “guide shops” around the country.

“In terms of what we can build with this no-inventory model, we can take much smaller real-estate spaces because we don’t have to have every single product on the rack,” she says. A Bonobos guide walks customers through the goods, helps with size and selection and then zaps the order to a central warehouse. With order fulfillment moving away from the store, “you [also] don’t need all the back office and storage,” Onvural says. “So it’s a much, much smaller square-foot space.”

MM.LaFleur’s Broadway location has six dressing rooms and plenty of space for all the necessary try-on outfits, yet the store is just shy of 1,000 square feet. Compare that to the 10,000-square-foot Armani Exchange nearby. (Or, then again, don’t—that location closed its doors in January.)

And it’s not just a matter of size, but also of locale. Since many of MM.LaFleur’s customers make an appointment to come in, the store doesn’t need traditional curb appeal. “We don’t have ground-floor retail,” LaFleur says of her locations, and “being on Fifth Avenue is not important at all.”

It’s a similar story at J. Hilburn, a Dallas-based upscale men’s showroom brand founded in 2007. While Hilburn stylists will come to a customer’s home or office to fit them for a new outfit, founder and CEO Veeral Rathod says the personalized attention on which his concept is built is enough of a differentiator that customers will seek out his three retail locations.

“Our customers are coming to us because they want [their clothing] to fit well and have a personal stylist,” he says, “not because they walked by the window.”

J. Hilburn’s flagship store in Dallas does happen to have a handsome facade at street level—the 1,400 square-foot store did $1.6 million in its first 12 months—but the freedom to situate a store in a low-visibility location has been a huge help to Rathod in New York, where rents are often prohibitively high for a startup like his. In Manhattan, Rathod inked a deal with WeWork, the cooperative office space, to set up a store on East 49th Street. Compared to a full-sized “studio” location, this one is much cheaper, smaller and requires a smaller staff to operate.

Retail locations like these, stripped of retail’s usual appurtenances like checkout counters, elaborate floor displays and cavernous stockrooms, also free employees from the chores of restocking, tidying shelves and running back and forth to check for the right size or color of something. As a result, staffers can devote more attention to actual customers, another factor that gives showrooms a competitive edge. According to research from consulting firm PWC, that face time results in higher sales, a decreased likelihood of returns and even increased ecommerce business, since existing customers have already been shown the offerings and know what size they take.

Meanwhile, showroom chains also enjoy significant cost savings stemming from more efficient logistics. Traditional retailers are always busy shifting their inventory from warehouse to store—and from one store to another store—a costly and often inefficient way of managing stock. But a central warehouse that ships only items that have already been selected allows Bonobos, for instance, to streamline operations considerably.

“Because we have a single inventory we’re pulling from, we’re not shipping inventory around,” Onvural explains. “We’re not having to plan for having all sizes and all colors, so we’re able to be much smarter about our inventory, which is more financially beneficial than a large brick-and-mortar retailer, which carries a large inventory [in each store].”

Similarly, at MM.LaFleur, the central warehouse allows management to respond quickly to the vagaries of regional preferences.

“Call it global warming, but temperatures these days are so unpredictable, a coat we can’t move in New York is popular in San Francisco,” LaFleur relates. But “keeping [the inventory] in one pool lets us react promptly to that.”

A new trend from an old idea

Showrooms might be current in the social-media age, but they’re not a new idea in retail.

“This is a reinvention of a very old form,” observes retail expert Paco Underhill, founder of consultancy Envirosell and the author of Why We Buy and other bestselling books on the psychology of shopping.

In decades past, companies like H.J. Wilson, Witmark and the once-massive Service Merchandise operated “catalog showrooms” that would display sample items that visitors could try out and, if they liked something, they could order it on their own. (In the case of Service Merchandise, shoppers handed in an order slip and waited for the stockroom boys to send their purchases out on a conveyor belt.)

Don't miss Adweek NexTech, live this week, to explore privacy, data, attribution and the benchmarks that matter. Register for free and tune in.
@UpperEastRob robert.klara@adweek.com Robert Klara is a senior editor, brands at Adweek, where he specializes in covering the evolution and impact of brands.