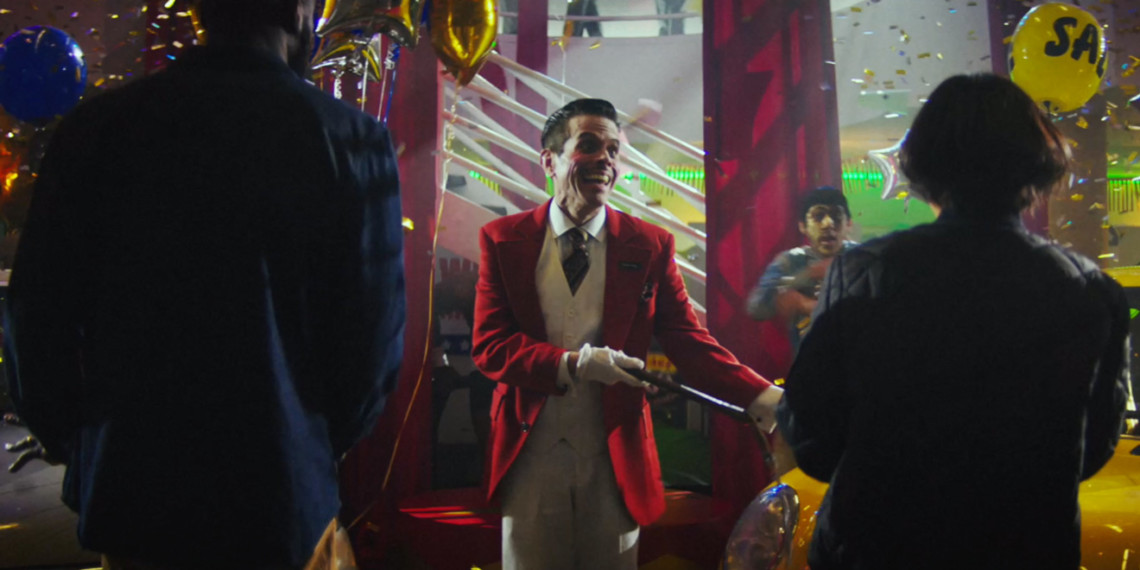 In "Circus," one of two new spots created by Anomaly, New York, a car dealership becomes a surreal sideshow. - Credit by Vroom

Two years ago, Gallup surveyed 1,000 Americans to find out which professions they trusted the most—and the least. At the top: nurses. And nearly at the bottom of a very long list was the car salesman, with a mere 8% of consumers viewing them as trustworthy. Indeed, the only job that ranked worse was being a member of Congress.

Of course, Americas’ widespread revulsion for the slick showroom jockey is nothing new, but one thing is: The pandemic, which seems to have given millions of homebound Americans the excuse they’ve long wanted to refuse to set foot in their local dealerships.

Which is what makes Vroom’s new campaign a timely piece of marketing indeed.

The campaign, which goes live on internet platforms on July 9, consists of two very dark, very funny spots that plunge viewers into the particular ring of hell that many Americans consider car buying to be. In one spot, a hapless woman appears on a mock game show called The Dealership Deal and nearly suffers a mental breakdown as the host pressures her to give up her trade-in model for less than it’s worth. In another, an unsuspecting couple wanders into the Three Ring Auto Dealership looking to try out a few models, only to be hemmed in and assailed by a creepy gaggle of midway performers who shove purchase agreements in their faces.

“The campaign is based on research that showed how dissatisfied consumers are with the traditional dealership experience,” Vroom CMO Peter Scherr told Adweek. After Vroom dug up research that showed that customer dissatisfaction with the auto showroom experience sat at 81%, Scherr explained, it was straightforward decision to launch a campaign that would “draw a distinction between the local dealership and the ecommerce, contact-free business model.”

The data also cleared the way for Vroom to go for the throat, riffing on all of the classic tropes of the seedily slick car salesman with the pomade in his hair and the breath mint on his tongue. The spots (produced with a creative assist from Anomaly, New York) “use exaggerated comedic devices,” Scherr said. “We want to make the dealership look overwhelming and high-pressure.”

But the biggest punch this campaign packs might be its timing. After all, even if auto showrooms were fun as theme parks and Americans couldn’t wait to get there, the pandemic has made most all one-on-one sales experiences verboten. And this is especially true with auto dealerships, where the average time it takes to buy a car is 3.6 hours, according to data from Autolist. Between the test drive, the credit check, the paperwork and the haggling over trade-in value, showroom car buyers can expect to be in close proximity to a salesperson for longer than it takes to watch The Godfather. And with lingering fears of the coronavirus in the air, few are in the mood to do that.

In fact, Vroom’s own research has shown that the 32% of Americans willing to buy a car online before the pandemic jumped to 61% during the course of it. “So, the crisis has made our business model more relevant than ever,” Scherr said.

The only potential problem for Vroom is that its business model is increasingly becoming the industry standard. In the weeks after the pandemic began, dealerships scrambled to adopt online sales models, frequently with the development might of the automotive brands that depend on them.

“That’s been one interesting pivot during this time,” Edmunds executive director for insights Jessica Caldwell told Adweek earlier this month. “A lot of dealers have successfully moved to that [online sales] model. It was either do that or don’t sell cars. They figured it out.”

So, does this concern the brass at Vroom? Scherr says no. “Our model was born as a delivery model and as a contact-free ecommerce model, so I totally understand local dealerships trying to adapt to delivering cars to customers and picking up cars,” he said. “[But] when you’re buying what’s often the second biggest purchase of your life, you want to trust a company that’s an expert in delivering that car to you. So that’s the difference. We’ve been doing this for years.”

Seven years, to be exact, a veritable eternity when it comes to online companies. And Vroom has also demonstrated its viability over that stretch. Pandemic be damned, Vroom went public on June 9 and watched its $22 share price go as high as $45 on first-day trading, raising close to $500 million and bringing the company’s market cap to some $2.5 billion.