The iconic characters team up to promote a good cause 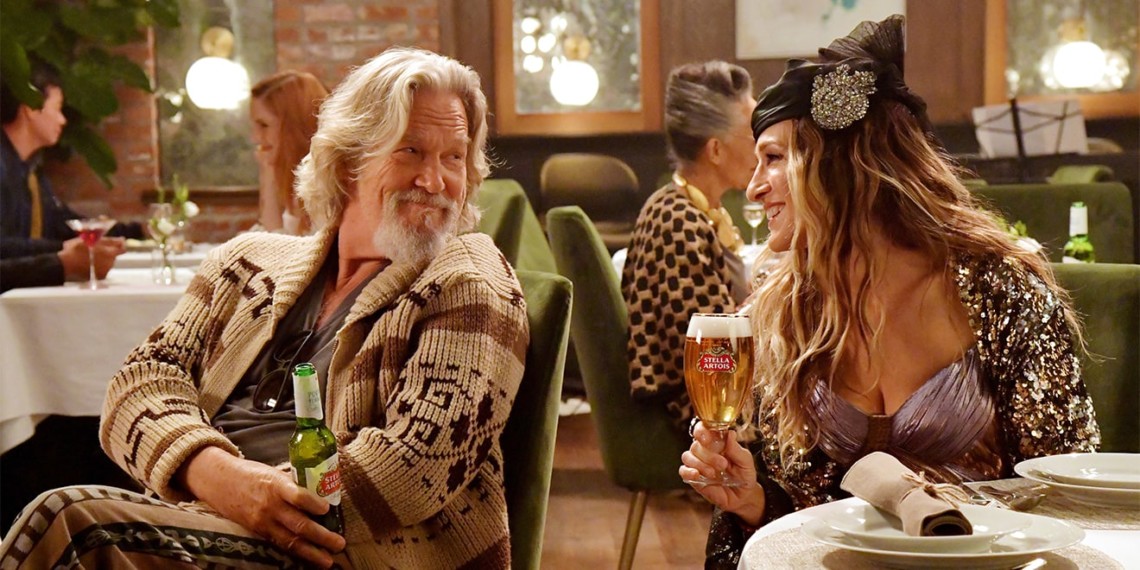 The Dude and Carrie Bradshaw make a change for a good cause in Stella Artois' Super Bowl spot.
Stella Artois
Share
By Diana Pearl
|
January 28, 2019
Share

The world’s most unlikely duo—Sarah Jessica Parker’s Carrie Bradshaw from Sex and the City and Jeff Bridges’ The Dude of The Big Lebowski fame—is coming together in Stella Artois’ Super Bowl spot.

The ad, which will air during the second quarter of the game, first shows Parker’s Sex and the City character entering a restaurant (with the Sex and the City theme playing in the background), where she’s welcomed by the staff and immediately offered her signature drink: a cosmopolitan. When she turns it down, asking for a Stella Artois instead, it sends the restaurant into immediate shock and subsequent panic. The music stops, flames swell, waiters run around and food is spilled. But Carrie gets her beer.

After she does, The Dude enters the bar. The bartender assumes he wants a white Russian, his go-to beverage. But like Carrie, he changes his mind and asks for a Stella. Drink in hand, he goes and sits down at the table next to Carrie’s, who leans over to compliment his drink choice, to which he replies, “Changing can do a little good.”

Bridges’ words have a deeper meaning, as behind the campaign is a charitable mission. Stella Artois has teamed up with Water.org, a charity founded by Matt Damon, to provide a month of clean drinking water to someone who doesn’t have it for every Stella purchased from now until the end of March.

The idea to use the two characters came early on in the process, according to Corinna Falusi, chief creative officer and partner at Mother New York, the agency behind the spot. Carrie Bradshaw and The Dude were easy choices not only because of how iconic their characters are, but also because both are associated with a signature drink. To join in Stella’s mission to provide clean water to those in need, both are willing to abandon their go-to cocktail.

“These characters are completely different, but they’re both very loyal to a specific drink,” said Peter Van Overstraeten, vp, premium and super premium brands at Anheuser-Busch. “But these two characters are both deciding to join the cause with Stella, even though they’re from different walks of life. She’s the New York sophistication, he’s the California cool, but both of them do this.”

Seeing the two on screen together “feels like two worlds are colliding,” said Falusi.

At its core, that’s what the humorous “Pour It Forward” campaign is really about: getting people to partake in Stella’s efforts to provide clean water through Water.org. “The whole campaign is a rallying cry to the American public to join us in the cause of providing clean drinking water to the people who need it,” said Van Overstraeten. “We’re trying to really motivate and really speak to the heart.”

Stella Artois first hinted at Carrie Bradshaw’s appearance in its Super Bowl spot with a 15-second teaser that shows Parker recreating Sex and the City’s iconic theme sequence, including getting splashed with water, which led Carrie to come to the realization that buying a Stella can “do a lot of good.”

And as for whether or not we’ll see Carrie and The Dude team up again for Stella? As Falusi said, you’ll need to “watch the game to find out.”