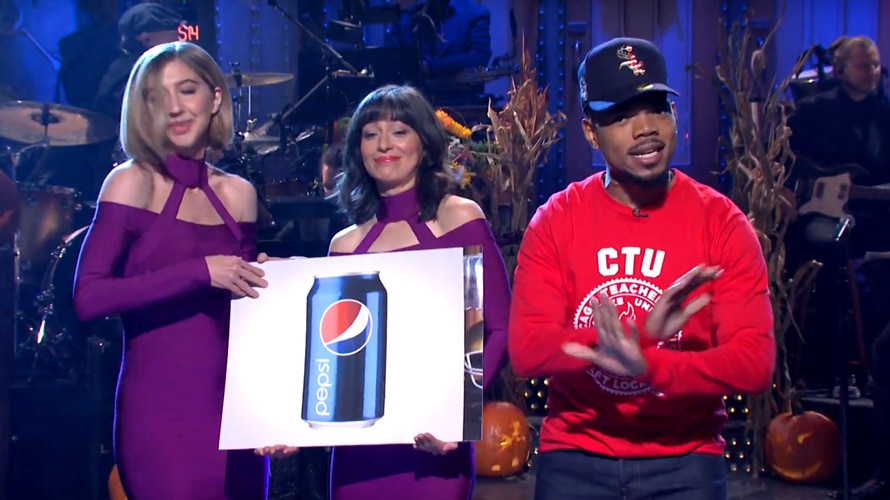 Chance the Rapper shared his 'second-best' favorite brands on SNL over the weekend. SNL

Whether it be a lunchroom table meme or an SNL skit, if you call the brands, they will come. In case you missed it, Chance the Rapper shared his “second-best” favorite brands on SNL over the weekend, and brands like Pepsi took to Twitter to respond. While the interaction is playful, there’s a lot to be learned in terms of real-time marketing opportunities. Here’s the long story short according to writer Stephen Spiewak, “If a brand can’t strike when the proverbial iron is hot, it’s probably best not to strike at all.”

Read more: What brands can learn from Chance the Rapper’s SNL shoutout.

Senior reporter Diana Pearl spent a month reporting from London—and one of the biggest themes from her time in the United Kingdom is that the country’s ad industry is struggling to deal with Brexit-induced turmoil. Agencies have a number of concerns, from attracting talent to their clients—industries that rely on easily moving goods in and out of the country could suffer under Brexit, leaving agencies who service those clients wondering if marketing budgets will be slashed.

Everything You Need to Know About California’s Consumer Privacy Bill

It’s no secret that marketers are worried about CCPA. One recent study found 87% consumers would opt out of ad targeting under CCPA’s terms. There’s a lot at stake, as violations will run companies four figures for each infraction.

Read more: Our explainer breaks down the bill in a number of ways, including:

Boeing likely spent over half a million dollars on full-page ads in various newspapers like The New York Times and Wall Street Journal, expressing sympathy for the lives lost because of Boeing 737 Max 8 planes that crashed and killed hundreds of people. What’s missing from those ads? An apology. Although there might be a good reason for that: “An apology is legally admissible in court as negligence,” said Eric Denzenhall, a crisis communications expert.

Just Briefly: The Rest of Today’s Top News and Insights

Ad of the Day: Here’s How You Write Ads for a Book About Writing Ads

Advertising books are usually written by people with long careers behind them (or at least a consulting business to promote). But freelance copywriter Thomas Kemeny is still grinding out his career, so he took a different approach to promoting his book.

Charmingly self-deprecating, Kemeny’s ads for entry-level copywriting guide Junior highlight that writing never gets easy, even when you’re writing books about it.

How Do You Build a Culture That Isn’t Afraid to Fail?

This always starts at the top. Building a culture that is OK with failure means first building a culture that understands the value of taking risks. And you can’t do any of that if your boss or director is mandating a zero-tolerance policy on perfection. All leaders and decision-makers must be aligned on being open and accountable to failure if we want to establish an environment that does.


This starts from the top down, and leadership needs to build this culture by example.

1. Own your own failures: Learning from failure takes acknowledgment of failing. Set an example for your team by publicly and immediately owning your own failures and showing the team what’s been learned. We all mess up, and there’s massive power in owning that. You’ll gain the respect of others and destigmatize failure.

2. Defend your team’s failures: Too many managers build themselves up by highlighting the failures of others. The old, “See how so-and-so messed this up, but don’t worry; I fixed it.” Instead, take your team’s failure as your own and remind leadership how you’ll work differently going forward. No bad will come of this. Leadership will see you as a confident, honest leader. And your team will follow you anywhere.

3. Encourage experimentation: Don’t just celebrate experimentation after the fact; ask for it from the onset. Empower the team to try new things and tell them failure is OK before it ever even happens. Only then can you create a true “test and learn” culture.