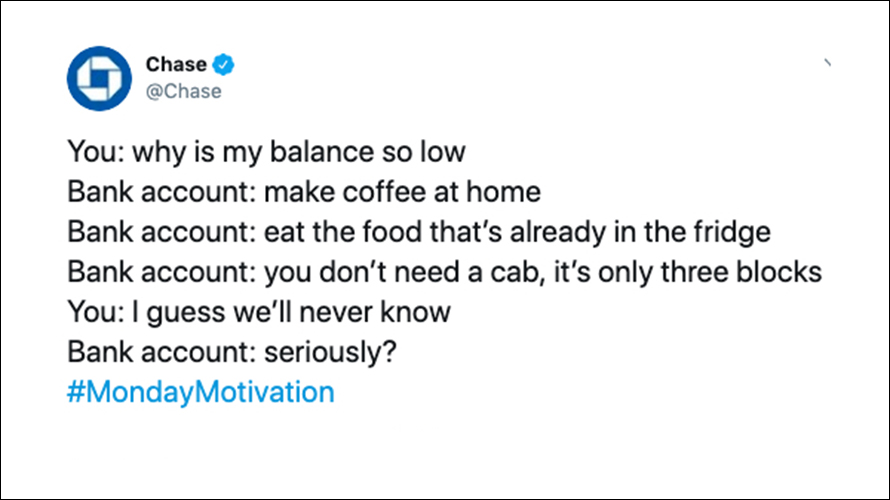 Living with a low bank account means enduring the constant dread of a single unexpected expense gutting the last of your savings—and triggering a spiral of overdraft fees.

So it’s not too surprising that quite a few people were unamused, and some downright enraged, by a Chase tweet today that offered snarky budgeting tips as #MondayMotivation:

With income inequality an increasingly volatile point of political and cultural tension, the tweet fell more than flat on Twitter. Many pointed out that when JPMorgan Chase found its own finances in peril in 2008, instead of bypassing cab rides or making coffee at home, the bank accepted $25 billion in bailout funds from the U.S. government.

The Chase tweet quickly generated considerable backlash, which continued long after the original tweet was deleted. Eventually even Democratic presidential candidate Elizabeth Warren shared a screenshot of the tweet and turned the tables on the bank’s meme.

The bank was trying to leverage a meme that’s been around for a few years and typically makes light of how obstinate and unreceptive someone can be:

guys: women are a mystery.
women: Here is what we-
guys: LITERALLY WHAT DO THEY WANT?
women: well for start-
guys: Guess we'll never know!

Several consumer brands get away with being feisty on Twitter, but Chase learned the hard way that consumer tolerance for snarky zingers from Wendy’s doesn’t extend to massive financial institutions.

considering chase got a $25 billion bailout, them lecturing anyone on fiscal responsibility is a little like a greek god lecturing on how to maintain healthy relationships pic.twitter.com/lRiusSIc3r

Really, Chase bank? Maybe if you made your $20 BILLION cup of coffee at home, you wouldn’t have needed a bailout. pic.twitter.com/CsnxpnmViX

Give us back the $12B in bailout money we gave you then you can lecture us about properly managing our finances @Chase pic.twitter.com/qaqc1pCe9d

Chase did not respond to Adweek’s request for comment on the brand’s tweet and resulting criticism. After deleting the tweet and being taken to task, the brand stopped short of apologizing but vaguely acknowledged the tone-deaf post: