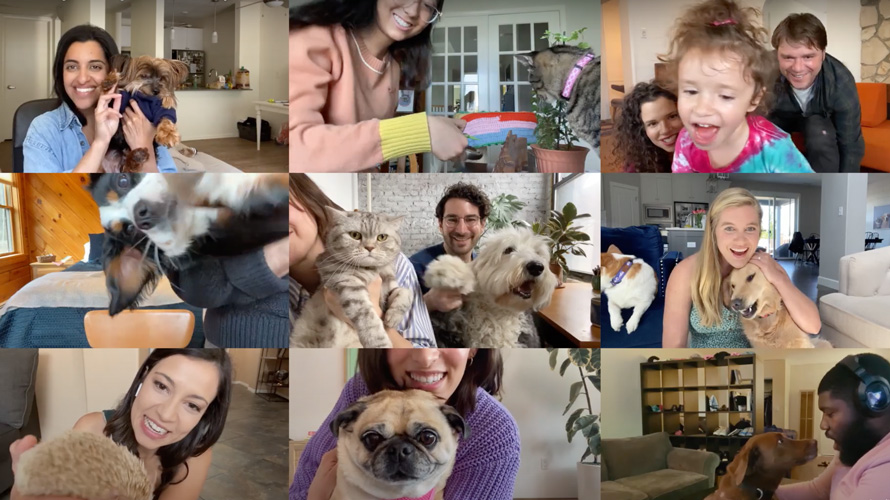 A new 60-second spot from online pet product retailer Chewy, which will live on the company’s various social channels, aims to celebrate all the happiness and levity that comes from owning a pet. Titled “Pets Bring Us Together,” the clip was produced remotely by Chewy’s in-house marketing team with help from creative agency SpecialGuest. While the ad was shot with actors, the pets aren’t acting—they belong to the actors themselves.

In the format of the now familiar Zoom conference, the video shows various people, dogs and cats on their laps, sharing their experiences of pet ownership while under quarantine. There are moments of laughter, face-licking and accidental bed-wetting.

“We’re really just excited to be sharing this level of optimism and playfulness and positivity in this time,” said Orlena Yeung, Chewy’s vp of marketing. “I think it’s a real contrast, in that there’s been a lot of heart-wrenching moments, which are very real. But I think there’s something different here, in terms of being able to highlight that there are positive things as we weather this, and figure our way through this as a human race.”

Chewy
Chewy’s latest annual report cited the phenomenon of “pet humanization” as helping to boost sales of pet products. According to survey data, in 2019 two-thirds of pet owners reported spending more on pet products than they had in the past, while 85% said they were willing to pay more for healthy pet foods and products. “Pet parents increasingly view pets as part of the family and are willing to spend more on higher-quality goods and services for those family members,” reads the report.

One of most uplifting trends of the past few weeks has been the emptying out of animal shelters. The boom in animal adoptions has had an impact on pet brands, too.

“Among all this stress, anxiety and uncertainty—there’s many adjectives we could use—pets continue to be this great bright spot,” Yeung said. “I think it’s really evident when you look at the surge in adoption around the country.”

In mid-March, Chewy debuted a webpage called Healthy at Home, which provides support for people adapting to the new realities of pet ownership during the pandemic, including articles written by veterinarians. As Yeung put it, the site contains everything from “credible information around safety and health, all the way to inspiration for how to keep your pet entertained or recognize signs of stress, which is obviously happening because their routines are severely disrupted.”

In recent weeks, Chewy has also donated more than $5 million in pet food, products and healthcare supplies to various shelters, organizations and pet owners affected by the Covid-19 crisis.

While the past few months have been terrible for retailers and restaurants, it’s given a boost to digital platforms, such as Chewy.

Earlier this April, in the company’s latest earnings call with analysts, Chewy CEO Sumit Singh said the company is experiencing both more demand from existing customers and a “meaningful lift” in new customers. Q1 2020 sales are expected to be between 35% and 37% higher than last year, and Chewy is looking to hire between 6,000 and 10,000 more people to meet the demand, primarily in its fulfillment centers.

Consumers didn’t just stock up for themselves at the beginning of the crisis—they made sure their pets would be alright, too. Figures from market research firm Rakuten Intelligence reveal that U.S. online sales of dog food and treats (excluding Amazon) was up 88% in March compared to the same period last year. Sales of cat food and treats increased 82%. At the same time, sales of housebreaking and incontinence products rose 132%, perhaps because people are concerned about taking their pets outside, or because more people are fostering or adopting pets that aren’t fully house trained.

Chewy reported sales of $4.8 billion for its 2019 fiscal year, up from $3.5 billion the year prior. Advertising and marketing expenses, which include payroll, hit $427 million, an increase of 8.6%.