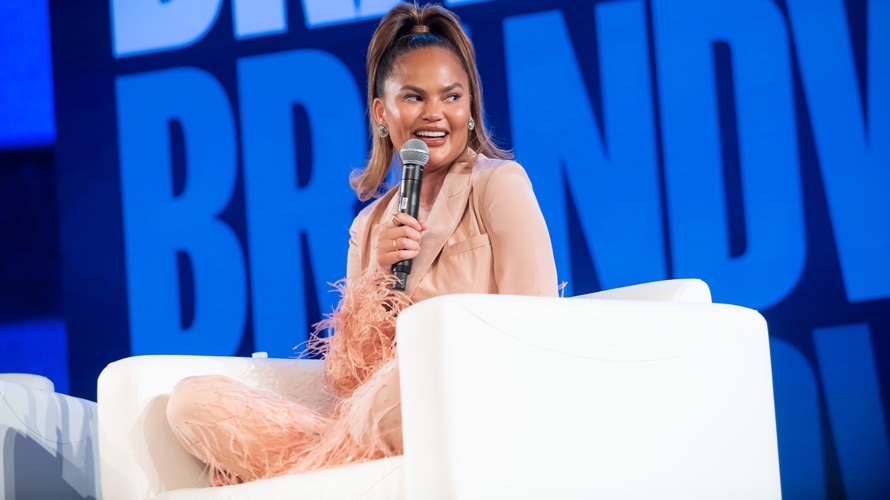 Chrissy Teigen dropped some big news during her chat with Adweek's Lisa Granatstein at Brandweek. - Credit by Sean T. Smith for Adweek

Chrissy Teigen is a woman of many talents: She started her career as a model, and has since added the titles of cookbook author, entrepreneur, social media maven (and unofficial Queen of Twitter) and more to her resume. It’s those accomplishments and accolades that earned her the additional title of Adweek’s 2019 Brand Visionary.

Onstage during our annual Brandweek summit, in conversation with Adweek’s editor and senior vice president of programming Lisa Granatstein during her “Chrissy Teigen on Family, Fame and Keeping It Real” panel, Teigen opened up about beginning her career in modeling and now moving into the world of food, where she sees herself in the future, whether or not she thinks about her tweets before hitting send and more.

1. She and John Legend are recording a song together

Teigen dropped this piece of news onstage—belatedly asking her husband, Legend, who was sitting front row in the audience, if that news was “a secret.” Legend jokingly responded, “Not anymore!” What the song is about and where we will hear it, however, Teigen is staying mum on.

2. She never saw herself as a model

Not only did Teigen not dream of being a model, she never wanted it to be the defining factor in her career. “It wasn’t a thing in high school where I wanted to travel the world and take pictures,” she admitted. “I really just didn’t foresee that in my future, and then everything just fell into place randomly.

“While it was a wonderful experience, I knew that I was never fully comfortable having that be my career title,” she added. She looked up to models-turned-moguls like Heidi Klum and Tyra Banks, who were able to translate their success on the catwalk to success off of it. Even at the height of her modeling career, she was looking for the next step.

“Once I was already in the midst, in the thick of modeling, I knew that I needed to get out of it somehow,” she said. “And then things just fell into place for me. I said ‘yes’ to the right things, I met the right people and created the right team, and that’s why it’s very hard to take credit for anything.”

Teigen “reads everything”—meaning, yes, all those tweets and comments—in large part because she enjoys connecting with her fans and the community she’s built. But in doing so, she is inevitably faced with criticism, and Teigen admits that she doesn’t just let it just roll off her back. She confided to being actually quite sensitive, and wanting to please everyone.

“That’s why it’s tough, because when you do enjoy reading everything and you do enjoy interacting with people, there’s going to be people that hate you,” she said. “But if I can fix like that one person, even I’m willing to do it. It’s a very weird trait of mine, and it’s exhausting to have, because some people are just going to hate you and it’s OK—but to me it’s not.”

Editor: Josh Rios
4. She sees more work with her husband (and kids) in the future

Besides their upcoming duet, Teigen wants to work with Legend more in the future, mentioning a variety, talk or late-night show as potential options. That’s still to come though, as Teigen said the right time will likely happen once “he settles down a little bit.”

She appreciates that her career has grown to a place where she can make “dreams come true” for her daughter, Luna, and son, Miles.

5. Twitter allows her to be connected and also an introvert

Teigen isn’t shy about her love of staying at home, with a glass of wine and Bravo on the TV. But what she loves about Twitter is that allows her to indulge that side of herself while still connecting with fans.

“What is amazing about the career that I have now and have created with Cravings, I’ve been able to kind of brand myself as the person that really loves staying in,” she said.

6. Her dreams run the gamut

Teigen’s aspirations for the future vary widely, from “curating an in-flight menu and being on the cover of Delta Sky” to being in an animated film to hosting a talk show. In fact, she’s already been asked to do the latter—and having to turn it down was difficult.

In terms of dreams she’s already fulfilled, the tasting event CravingsFest, which took place for the first time last year during the New York City Wine & Food Festival, was a definite highlight.

“Creating CravingsFest was a big dream of mine that, when that came together, I was really proud of it,” she said. “I was shocked by the response, shocked by the amount of people I got to see in person that I had been talking to for years and years online.”

Teigen has made a name for herself through being authentic on social media, and for that reason she sees sponsored social media posts as a primary concern when negotiating brand deals. Brands appreciate how real she is (a quality, she said, that was a hinderance for her in the early years), but her fans have to feel it’s real, too.

“I might be craziest about the social offers,” she said. “Even when I sign on to work with a company, I think that’s always the first thing we do is we look at the social, because it’s incredibly unnatural for me to post so many sponsored ads. I can’t just post it, just take the money and leave and not look at the comments. Everyone’s always so disappointed in me or so mad at me, and I hate that.”

Teigen has found a good place with those deals, however, and feels that now, her team has “curated it perfectly.”

“I have to actually love what I’m working for,” she added. “Obviously, I’m not going to do a flat tummy tea thing.”