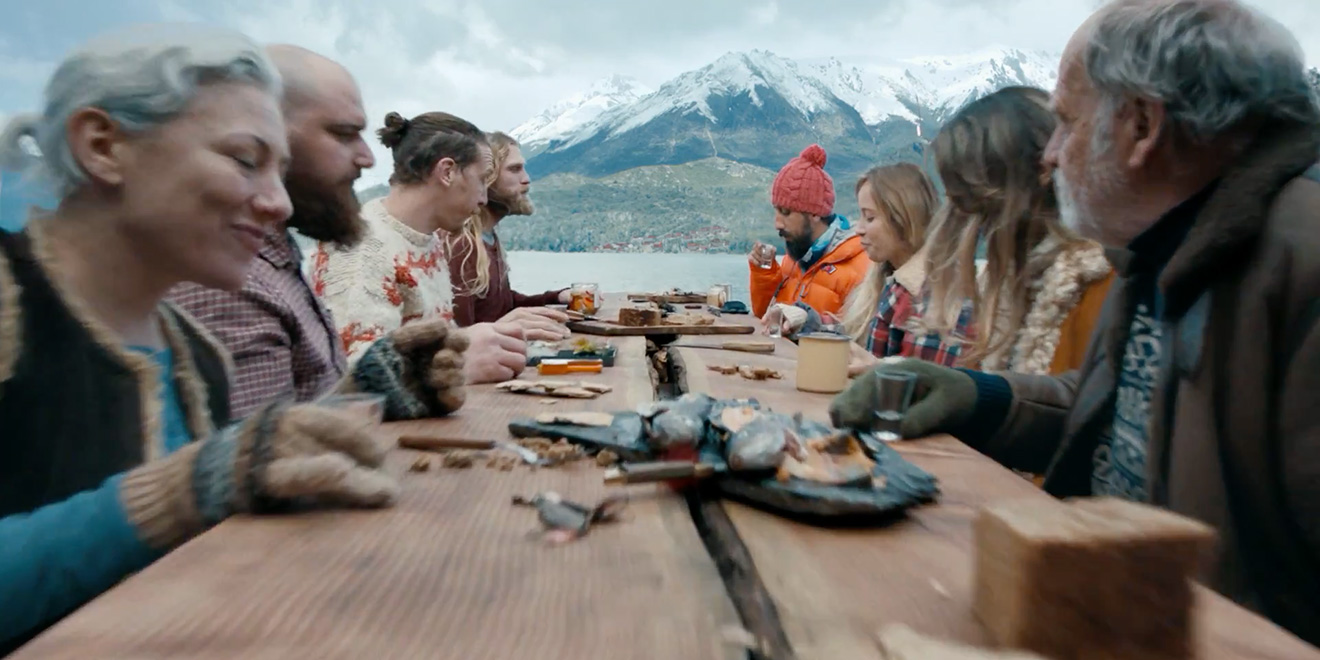 There’s a lot of cool stuff to do and see in the world, and Delta wants to help you get on it pronto.

A gorgeous new almost-minute-long ad from Wieden + Kennedy New York makes that familiar case in a surprisingly fresh way, stringing together footage from more than 15 destinations serviced by the airline in a clever visual metaphor, and featuring a voiceover from Oscar-winning actor Viola Davis.

A solo backpacker gets out of a taxi and dodges a zooming auto rickshaw laden with teetering vases on a foggy night street somewhere in Southeast Asia (apparently, Vietnam). A traveling couple befriend the owners and staff at a delightfully azure fresh seafood restaurant, maybe along the coast of the Adriatic Sea. A young boy exploring with his mother meets a capybara on a lakeside dock in South America.

They’re not just the same-old tourist scenes. Each somehow fits into the ad’s titular theme, “Runways,” by repurposing some rectangular part of the shot—the street, the table, the dock—as a stand-in for just that, a runway. The camera perpetually zooms in, accelerating down each platform-for-takeoff, and pulling the viewer along for the trip.

“The old saying, ‘Good things come to those who wait’ is just that—old,” says Davis, as the montage picks up speed. (Guinness likely won’t appreciate that dig at its classic tagline.) A jet engine revs in the background. “Those good things… you have to get out there and chase them. We see it in the millions of people we fly around the world. All of them, living proof. Good things come to those who go.”

The visual feast continues. There’s an outdoor smorgasbörd in Scandinavia, and a bowl full of bees also for eating, presumably in China. There are vibrant nightclubs, carnivals with cartoon dragon floats, pineapple-eating motorcycle rides, sheep flash mobs, bocce ball games with gregarious old men, lakes and forested mountains and snowcapped mountains, and messy hotel rooms and dusty roads and sandy beaches and piles of spices and gargantuan trees. There are crystal clear pools for swimming. There is a plane taking off into the clouds.

It’s a striking feat of film craft, both for weaving together the stunning and the spectacular with a dash of the dramatically mundane, and for creatively structuring the shots—some sideways, some upside down—to fit the motif. Unlike most ads, it gets richer on repeat viewings.

The spot was directed by Megaforce, the collective last seen making Nike’s “Nothing Beats a Londoner” spot (via W+K London), itself a master class in camerawork.

As is often the case with W+K’s work, the Delta ad is simple, poetic and perfectly crescendoed, with a takeaway that’s both cerebrally clear and emotionally compelling. The copy is sharp and insightful, turning a platitude into a rallying cry by altering just one word, and articulating the brand’s value proposition along the way: Start racking up the best experiences everywhere, with help from Delta.

Then there’s the “Keep Climbing” tagline—it’s own genius bit of aspirational rah-rah—under which the new spot falls. So even if you can’t go out and buy a fistful of tickets to far-flung lands right now, it still offers you something to reach for, planting a seed for future adventures.

Then again, if you climb too high, you might end up on the moon. And Delta doesn’t go there. At least, not yet.