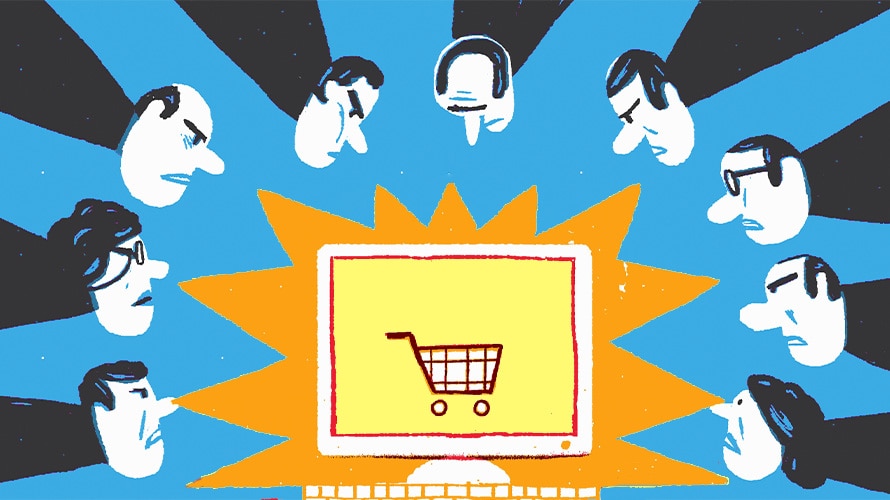 Well over half of the participants in a recent study think that companies don’t operate with their customers’ best interests in mind. - Credit by Illustration: Trent Joaquin; Source: Getty Images

Last September, in the wake of news that the now-defunct Cambridge Analytica had harvested the personal data of millions of Facebook members without their consent and then deployed it for shady political purposes, Mark Zuckerberg found himself beneath the hot lights of a Congressional hearing. Looking uncomfortable in his navy blue suit, sometimes stammering his responses, the Facebook founder offered many an explanation and apology, including:

“It will take some time to work through all of the changes we need to make, but I’m committed to getting it right.”

Doubtless that was the best thing to say—but it was too little, too late. Prior to the scandal, 79% of Facebook users said they were confident that the social media platform was “committed” to protecting the privacy of their personal information. But just one week after the Cambridge story broke, that number plummeted to 27%, a 66-point nosedive.

Not that lack of trust in tech giants like Facebook was a new thing. In 2016, this magazine reported the results of a ranking by brand consultancy Prophet. Asked to list brands they trusted in the order they trusted them, consumers stuck Facebook down at No. 200. Hardly faring much better, fellow data colossus Google sat at 130.

With consumer faith at all-time lows like this, you’d think that the tech sector’s best and brightest might have found ways to rebuild some of consumers’ lost trust—but, if anything, the news seems to have only gotten worse.

The latest evidence: Trends in Consumer Trust, a just-released study by customer-relationship management giant Salesforce. It revealed, among other things, that 59% of consumers now fear that their personal data is vulnerable to hackers, and well over half—54%—think that companies don’t operate with their customers’ best interests in mind. 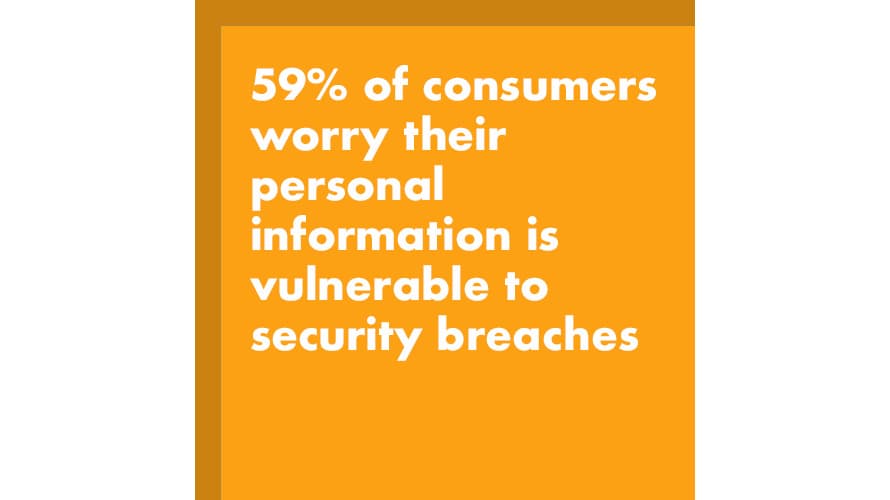 “Whether you’re looking across the geographical or political world, [or] the economic and social issues across industries, there have been breaches of trust,” said Stephanie Buscemi, CMO of Salesforce, who spoke with Adweek prior to her keynote presentation on trust issues delivered earlier today at the Digital Marketing Expo & Conference (Dmexco) in Cologne, Germany. “Customers are in the midst of a trust crisis. In particular, the tech industry is in the center of that,” Buscemi said.

And she should know. Cloud-based software maker Salesforce is the largest customer-relationship software firm in the business, so concerns about privacy, data security and the ethics surrounding data use are inescapable issues for its sector.

Trust, Buscemi believes, has assumed an equal footing with traditional brand attributes like quality and value to become an essential piece of what any company needs to offer consumers.

“It’s no longer enough to have a great product or service,” she said. “You have to build a deep relationship with your customers.”

Which sounds great in theory, of course, but what does that mean operationally? After all, trust is a state of mind, a nebulous concept and not the sort of thing a brand can simply create the way it can, for instance, introduce a new service or lower the price of a product.

In line with Salesforce’s report’s recommendations, Buscemi stressed the need for brands (all brands, not just the tech giants) to exhibit more transparency with customers and also ask for consent regarding data usage in advance of every transaction.

“There’s a lot a brand can do,” she told Adweek. “Every interaction needs to have a level of consent factored in, and every one of those interactions is an opportunity to build trust.” 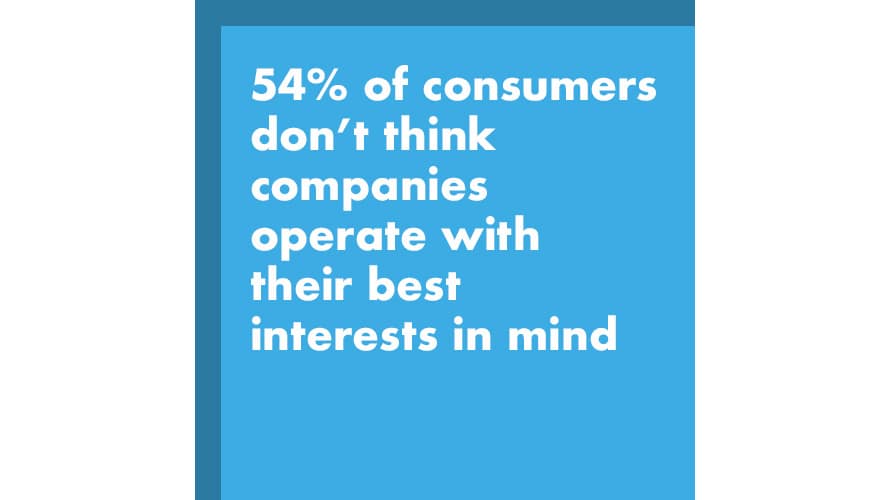 Dmexco is the digital industry’s largest trade show, so it only makes sense for the largest CRM firm to be talking about data privacy and trust issues there. But the timing of Salesforce’s report is significant for another reason. The California Consumer Privacy Act (CCPA)—widely regarded as the American analog to the E.U.’s General Data Protection Regulation—is set to take effect in January. Its provisions include requiring companies to disclose the personal data they collect, how that data is used and to whom it’s sold, and to delete that data upon request. Given that the CCPA governs not only companies based in California (which Salesforce is) but any companies doing business in that state, brand consultant David J. Deal says it’s not especially surprising that Salesforce would want to talk about trust issues now.

Deal believes that it’s more than recent news events that have accelerated the ongoing erosion of consumer trust in brands, especially brands in the tech sector for whom data is a stock and trade. The deeper cause, he says, is generational.

“Millennials and Gen Z are more distrustful of brands than any generation before them,” said Deal.

Mario Natarelli, managing partner at brand consultancy MBLM, adds that consumer trust in brands has been further compromised by what he calls “branding in a post-truth world.” At a time when opinion passes for reportage and many consumers refuse to believe empirical facts, trust is more difficult to achieve than ever.

“Who can you believe and who do you trust when we’re living in a time of brokered information that feels so precarious?” he asked.

In addition, Deal points out, the concept of trust—especially for younger consumers—extends well beyond concerns about data privacy and usage.

“They distrust brands to be good corporate citizens,” he said. “They question how brands are committed to being sustainable, their hiring practices, their ability to provide a good future to them.” 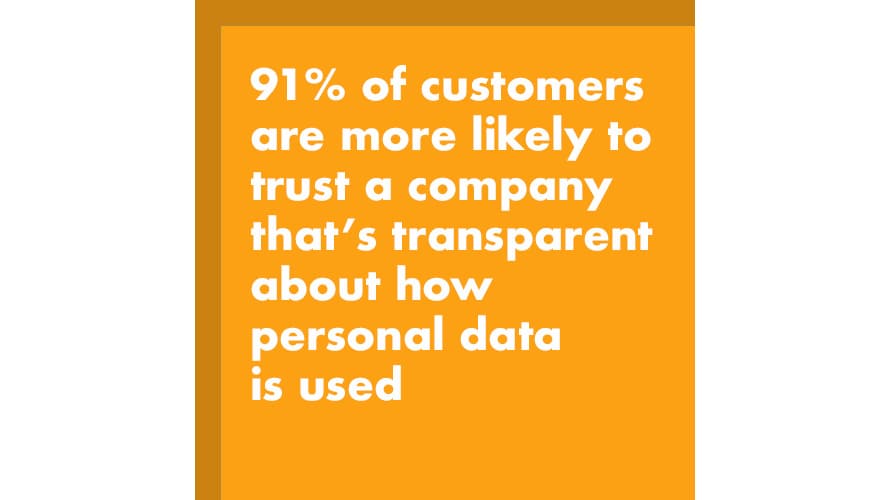 Deal’s observations are borne out by the Edelman Trust Barometer, which was released in January. It found that, in addition to being wary of how corporations were collecting their data, tracking them and employing AI to market to them, consumers were, in a broader sense, questioning corporate morality in general. According to Edelman’s findings, a whopping 81% of respondents said that, before they make a purchase, “I must be able to trust the brand to do what is right.” What’s more, 53% of consumers believe that brands have a duty to get involved in at least one social issue that has no direct bearing on their bottom lines.

These beliefs also showed up in Salesforce’s report.

“[In] our study, 90% of customers said companies have a responsibility to improve the state of the world,” Buscemi said. “Businesses have a role in giving back to the societies and the markets in which we operate.”

The broader point is that businesses that commit to the sort of positive social and environmental change that’s top of mind for many consumers stand to win more of those consumers’ trust. For example, Buscemi points out that 42% of U.S. millennials identify as part of an underrepresented minority group, so “if a brand doesn’t have a multicultural strategy, it doesn’t have a growth strategy.” Salesforce’s study is also replete with evidence of how customers reward the brands they trust with increased patronage and referrals. For instance, 92% of customers who trust a given brand say they are more likely to purchase more goods and services from that brand. 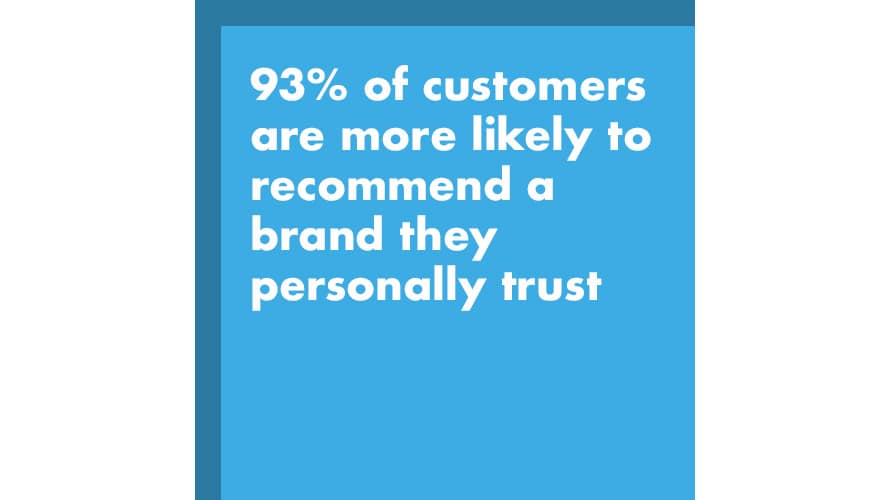 While Salesforce attempts to lead by example when it comes to data transparency and aligning its business practices with consumers’ expectations of responsible behavior, Buscemi is markedly humble about those efforts.

“I’d never claim a victory lap on this [issue],” she said. “When we started 20 years ago, we wanted to be a different kind of business. The very first core value of the company was trust.” But, she adds, “there’s no finish line. You’re building trust at [every] interaction. Trust can be broken.”

And for tech giants like Facebook—brands whose carelessness and abuses of consumers’ personal data played out in news stories the world over—trust might never return to the levels seen in the optimistic early days of Web 2.0. When it comes to companies like Facebook and Google, Natarelli said, winning back consumer trust “is going to take a sustained and prolonged [effort] and the kind of commitment on a scale that many of these brands don’t appreciate. When a business is predicated on leveraging information, I don’t know how they could ever turn a tanker that quickly.”