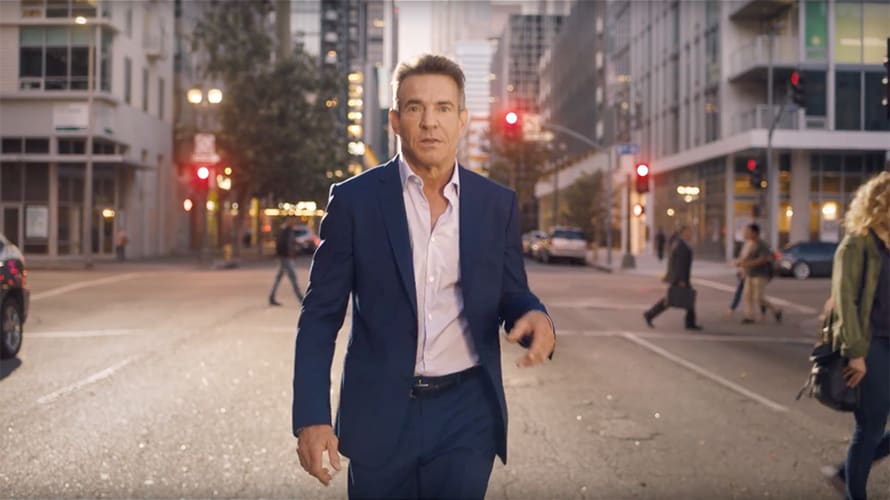 Dennis Quaid is here to tell you how painless insurance can be. Esurance

The actor stars in a new spot for the brand as part of Esurance’s new brand platform, created by Leo Burnett Chicago. While the brand has worked with big names in the past—you might recognize John Krasinski’s voice from past ads—Quaid is the brand’s first on-camera spokesperson, and his main mission is to show people how hassle-free insurance can be with Esurance by breaking things down in simple language in an extremely meta ad.

There’s a man sitting in a café, which boasts overly dramatic music and prop apples. Quaid even narrates himself walking off into a dramatic sunset and introducing the brand’s new tagline, “Surprisingly Painless.”

Nancy Abraham, vp of integrated marketing communications at Esurance, said the company conducted “a lot of research” to identify key problems consumers have surrounding insurance. “We realized if we are going to be a disruptor in the industry, then were going to have to address the pain points, and there are a lot of pain points in insurance,” Abraham explained. “People really don’t understand insurance, they don’t understand the jargon, they don’t really even know what they are buying [or] what they are getting. They don’t know if they are properly covered.”

The brand took this new campaign as an opportunity to address these pain points and address how Esurance could provide solutions, making the entire insurance process “surprisingly painless.” The meta nature of the campaign came from the creative team’s belief that consumers want to be spoken to in a straightforward manner.

“We are openly acknowledging the way that people really feel about insurance. It felt like something that hadn’t really been said before,” Brian Siedband, svp, creative director at Leo Burnett, said.

As for the selection of Quaid as the brand spokesperson, Esurance said it wanted someone that consumers across generations would know and relate to. They also chose Quaid because he hasn’t really done commercials before, so he would be a fresh face for the brand to work with.

“He is this tried and true actor. He is somebody who people have a connection with. He’s endearing and charming. We wanted someone people would listen to and somebody who was a bit more surprising,” Abraham said. “He’s known for his dramatic roles, but he can deliver that humor in a very earnest way.”

Another big reason behind the new campaign and brand refresh is to get more people aware of the Esurance brand and build credibility. “People aren’t as familiar with Esurance, and we want people to feel good about this brand and feel that we are a credible and honest brand,” Abraham aded.

The campaign will begin rolling out across TV, digital and social on Aug. 20.