It also showed them to be a frontrunner among athletes 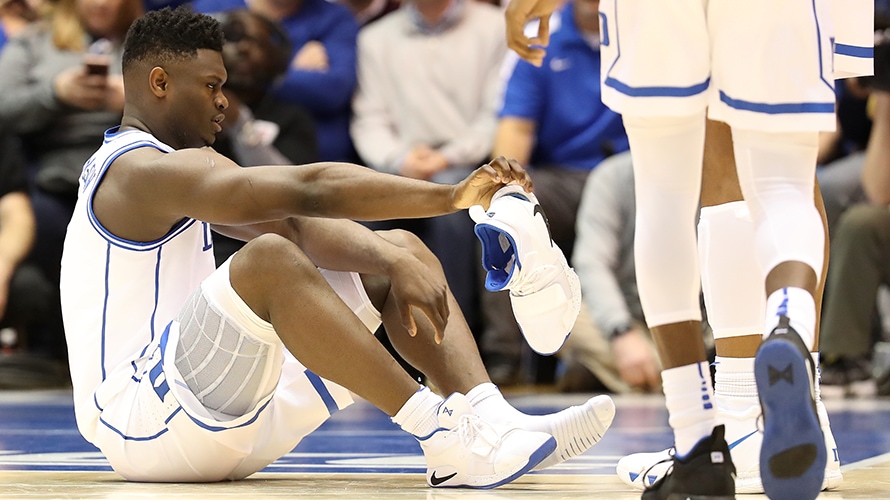 Zion Williamson sprained his ankle in a game on Feb. 20 when his Nike sneaker ripped apart as he tried to pivot.
Getty Images
Share
By Aaron Goldman
|
February 22, 2019
Share

On Feb. 20, 18-year-old basketball phenom Zion Williamson blew out his Nike PG 2.5 shoes during Duke’s game against UNC, sending him off the court with a knee injury.

This single broken shoe may have altered Nike’s trajectory over the next decade.

After all, the fate and reputation of shoe brands rest as heavily on their star sponsors as it does on their product quality. Just ask Adidas, who low-balled a teenage LeBron James and lost him to Nike. Or ask Nike themselves, who came unprepared in their pitch to future megastar Stephen Curry and lost him to Under Armour whose stock then rose 50 percent during Curry’s two MVP seasons.

The brand value of a superstar is undeniable, and Williamson is the most highly-anticipated basketball prospect in recent memory. The 6-foot, 7-inch, 285-pound Duke power forward is widely anticipated to declare for the NBA draft this summer where he will be picked first and quickly sign what many believe will be one of the largest sneaker endorsement deals in history. Shoes will be just the beginning; LeBron inked deals with Coca-Cola, Cadbury and Upper Deck Company in his first season, and there’s no reason to expect anything less for Zion. Today, the NBA’s 10 biggest endorsement stars will have generated a combined $234 million off the court in 2018, according to estimates from Forbes.

Any brand with the ingenuity to successfully pull Colin Kaepernick out of retirement is likely to find superstars to carry their brand into the next generation.

The inevitable sponsorship frenzy that awaits a player like Zion is already casting a long shadow over the entire college basketball season, and especially over its marquee event, the NCAA March Madness tournament. One can already see the intense interest in otherwise relatively obscure regular season games and hear the sounds of brands making their calculations.

Brands will look at Zion’s influence, including his 2 million Instagram followers, 222,000 Twitter followers and the fact that TV ratings for Duke games featuring Zion are up 60 percent from similar games last year when he didn’t play.

Brands will look at Zion’s skills. When you have to enter into a multi-year commitment, you’re betting on a degree of success. Is this sponsor going to be a champion, an all-star, a perennial star?

Brands will consider geography. In the NBA’s draft lottery, the bottom three teams each have a 14 percent chance at landing the number one pick. Were the season to end today, those teams would be Cleveland, Phoenix and New York. The difference in audiences and demographics are huge and will play an important role in the broader interest for stars within that market.

Most importantly, brands will look beyond the raw segments at the intangibles like personal values. Just as important today is the sponsor’s character and how they use their considerable platforms to express themselves, how they develop their voice and what they stand for. Look at Colin Kaepernick, who signed a massive endorsement deal with Nike two years after he last played a game. Or, even better, look at the notoriously boring yet ultimately reliable Kawhi Leonard, who signed a deal with notoriously boring yet reliable New Balance that many noted for being uncannily on-brand. The key for brands is understanding their customers and ensuring that core values are aligned with athletes’ personas.

This all points back to Zion, a blown-out shoe and new uncertainty about his summer plans. Zion might not have his sponsorship deals yet, but you can bet that brands have been assessing his value for some time already. That’s what happens when a single broken shoe and a single sprained knee for a single unpaid college athlete already has nine-figures’ worth of impact for marketers.

For Nike, whose shares are already trading downward on the news as #JustBlewIt trended on Twitter, the impact could be felt more in the short term than over the long run. Nike is still the undisputed juggernaut of sneaker marketing, and any brand with the ingenuity to successfully pull Colin Kaepernick out of retirement is likely to find superstars to carry their brand into the next generation, Zion or not. But a public whiff on a generational talent after their product malfunctions and derails his career? That’s a major hit for the brand’s momentum.

It could also be a big opportunity. In some ways, Zion’s blown-out sneaker made explicit what many already assumed: that Nike is the frontrunner for any star of his caliber. This is a fact not lost on many of Nike’s smart, media-savvy customers. In an era when other NBA stars are jokingly flaunting the terms of their sponsorship deals with Hulu, Nike has a rare opportunity to be explicit in how they mend this situation and get Zion back aboard.