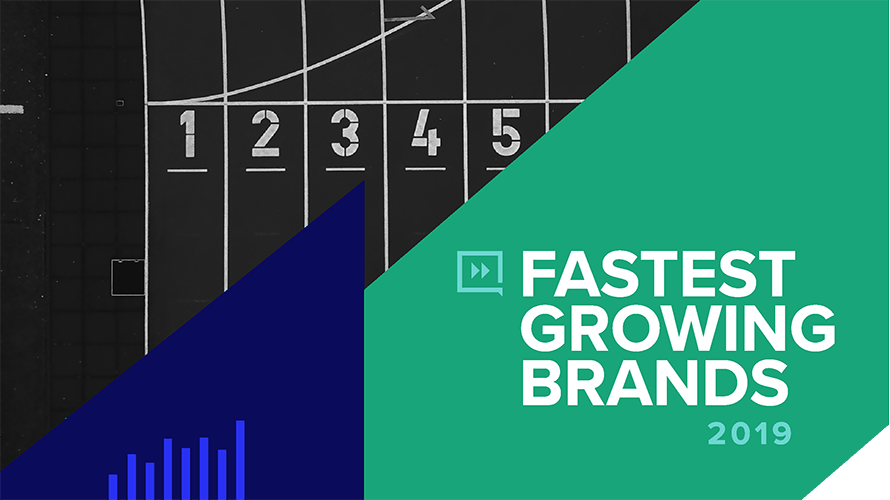 It’s 2019 and the Gen Zers are Ok Boomer-ing en masse online and reportedly on the streets. Meanwhile, media has deemed Gen X a “so-so” mess and claims the millenials are doomed.

Needless to say, it’s been tough for generations to make peace with each other this year, considering we’ve spent most of it pointing fingers at one another and butting heads over pop culture wars a la Billie Eilish v. Van Halen, but Morning Consult released a report today that brings a glimmer of hope for humans of all ages.

Per The Fastest Growing Brands of 2019, Morning Consult’s first annual definitive measure of successful brand growth, it turns out that these four generations share common ground across America: we all love getting food straight to our door and we’re down to clink-clink with a Claw in hand. 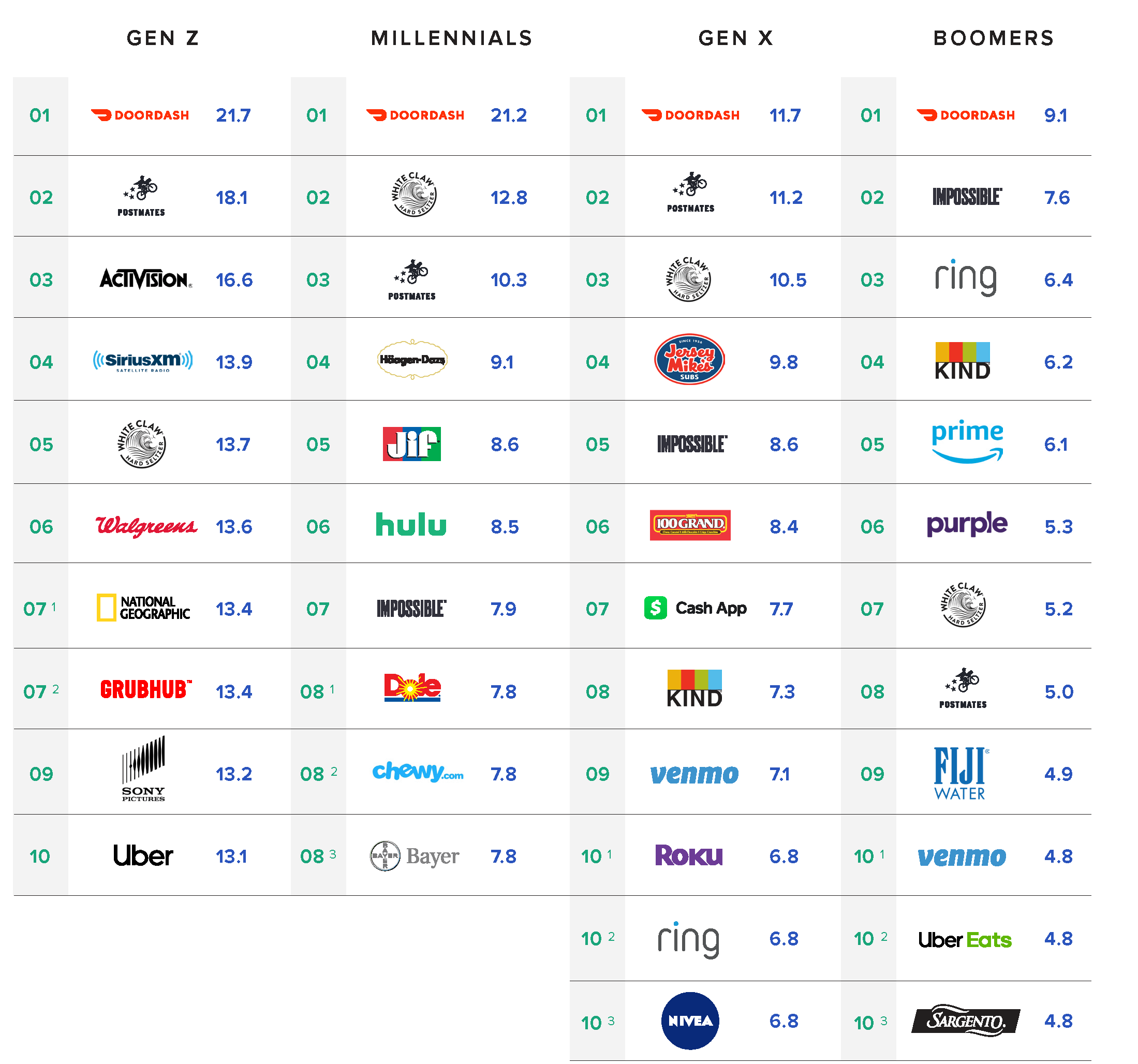 Some findings are shocking, while others are no-brainers. For example, the report found that, surprisingly, legacy brands like Activision, Walgreens and Sony Pictures Entertainment are making inroads with Gen Z consumers, while Boomers have taken the most interest in brands that launched within the last 15 years.

Juul led the brands in terms of name recognition. Even though the brand halted most of its U.S. advertising by September, FDA warnings and bad publicity from influencers like Doug the Pug kept the brand’s name in the spotlight.

We’ve listed out the Top 20 fastest growing brands below.

DoorDash has once again championed the title of Fasting Growing Brand, leading its competitors PostMates, UberEats and Grubhub by a 14-point purchasing consideration increase. Number one with all the generations represented in Morning Consult’s findings for 2019 and ranked right behind Juul in terms of named identification, DoorDash is winning the brand game. According to the report, it’s because they’ve armed themselves with $2 billion in venture capital funding to take a blanketing strategy approach, expanding their customer base from cities into the suburbs.

This year has been a big one for DoorDash in terms of marketing. It aired their first national TV campaign in January and, per Kantar Media, went from spending $1 million on measured media to over $6 million. Meanwhile, the brand was testing autonomous vehicle delivery with self-driving vehicle company Cruise on the streets of San Francisco.

As of August 2019, DoorDash is available in more than 4,000 locales within the United States and Canada. And, in several of these cities, DoorDash customers can opt to sign-up for DashPass, a monthly subscription service that gives you unlimited free delivery for only $9.99.

White Claw, the most memeable skinny spiked seltzer in the alcohol realm, became the nation’s bubbly obsession this summer. Per Eater, White Claw was the season’s most popular adult beverage, likely due to its inexpensiveness, “guilt-free” gluten-free qualities and all the gratuitous marketing it was garnering from Twitter and TikTok memes (and even songs).

Now with this report from Morning Consult, we now know that White Claw’s fruity 5% percent alcohol by volume formulas performed well this year across the board with all generations, with their strongest fans chugging in the millennial and Gen X cohort.

(It was pretty popular among Adweek staffers too.)

Back in April, managing director of Postmates’ agency of record, Mother Los Angeles, Romain Naegelen expected 2019 to be a “massive” year for Postmates, and her prediction came true. Postmates made it to bronze status on this report’s Top 20 list, and its high ranking amongst all generations is further evidence that while generations might be divided in terms of fashion, ideology and music preference, they’re at least all drawn toward the convenience of food delivery services.

In March, Morning Consult found that 36% of Americans wished that more fast-food restaurants offered plant-based options and just a month later, Impossible Foods and Burger King made those veggie dreams come true with the inclusion of the Impossible Whopper on the menu for a limited-time only in St. Louis. The popularity of the meatless, protein-packed patty was so in-demand that the Impossible Whopper offering went nationwide by August.

By September, Morning Consult reported that Impossible Foods had doubled their customer base in a year. In this latest report, they cited that most of Impossible Foods’ growth in consumers and in name identification came from that partnership with Burger King.

Even though we found that two-thirds of consumers have never used an app to send money, Venmo was the fifth fastest growing brand in 2019. As of this April, the mobile payment service reportedly has 40 million users. Trailing close behind on this list is competitor Cash App (#8). 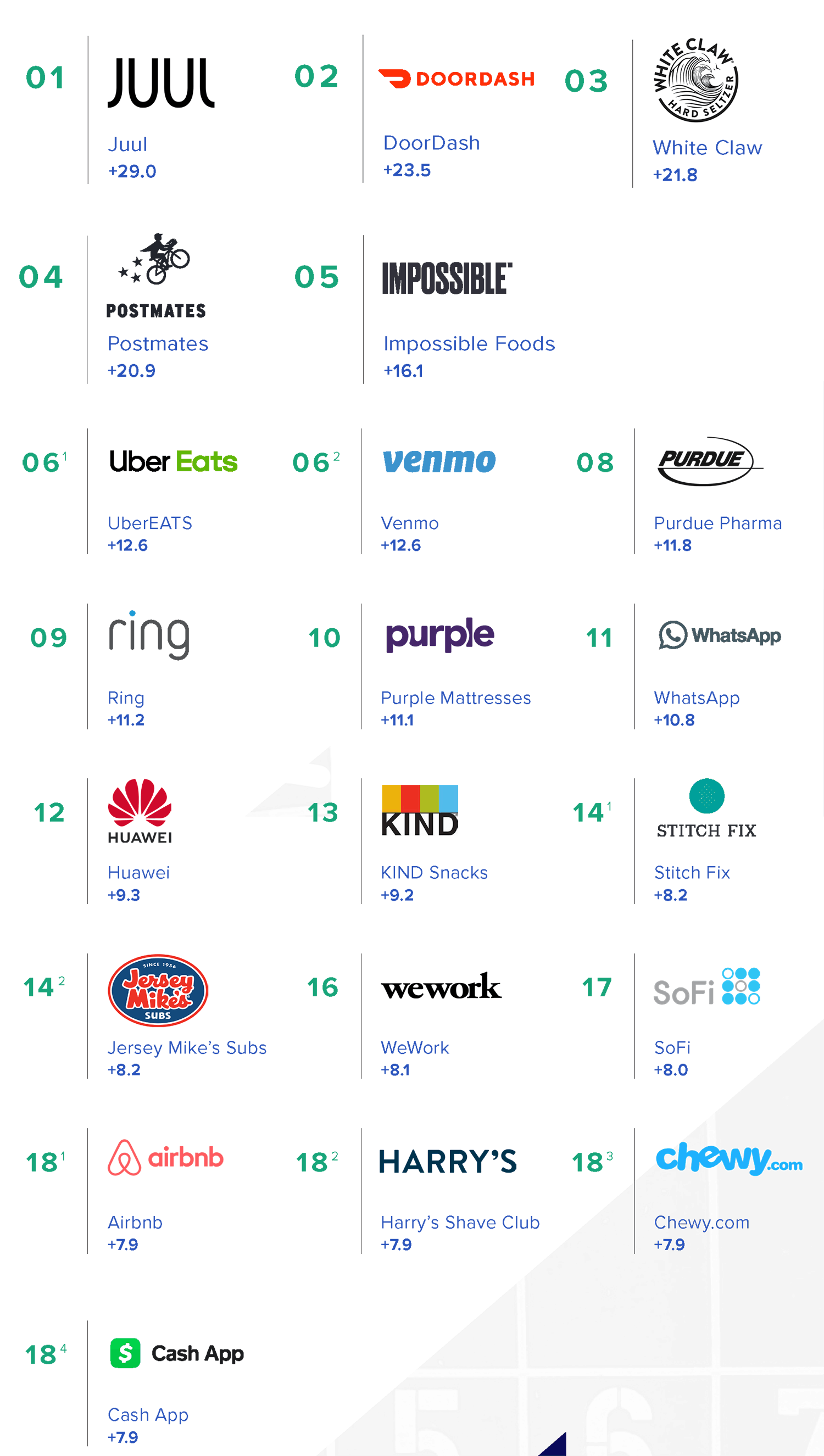 Below are the next top fifteen fastest growing brands on the report: