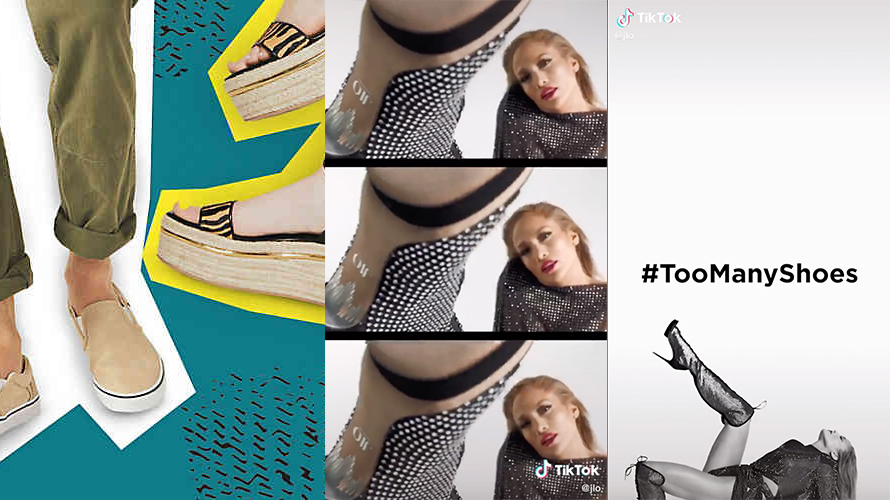 Entertainer Jennifer Lopez, who partnered with DSW earlier this year, also got in on the retailer's hashtag challenge. - Credit by DSW, @jlo/tiktok

When its first TikTok hashtag challenge launched Saturday, footwear retailer DSW’s aim was to merely dip its toe into the social media platform, in the words of CMO Amy Stevenson.

The testing of those waters, however, proved to be more of a plunge: As of Wednesday, its #TooManyShoes campaign has generated some 1.7 billion views, she said. The idea was that people needed an outlet to show off their favorite shoes after spending months in quarantine.

“We’re in a very lucky category—shoes are so emotional,” Stevenson said. “We know customers have been posting content on our behalf. It allowed us to play into that too.”

What the retailer found was that fans of the site were eager to open up their shoe closets for a chance to win $500 gift cards, 10 of which will be given out.

“They are so excited to show people their shoe closets,” she said.

To create the campaign, the retailer’s brand team and its media agency of record 360i partnered with creative agency Movers+Shakers, which also worked with beauty brand e.l.f. on its TikTok campaign.

On Oct. 4, e.l.f. Cosmetics launched a six-day hashtag challenge created by the agency, accompanied by a 15-second original song called Eyes.Lips.Face. By early December, more than 2 million videos had been created, which grew to 3.5 million by May 10, generating some 5.2 billion views.

To help DSW develop the song, Movers+Shakers tapped songwriter Julian Xtra and singer Devmo to come up with the beats and the lyrics.

Julie Roy, vp of marketing strategy and messaging at DSW, discovered Movers+Shakers by exploring the most successful TikTok campaigns for retailers and the agencies behind them.

“I was most interested in their approach of custom music and lyrics to support the campaign, which Movers+Shakers has proven successful at developing as an integral part of their campaigns,” she said.

DSW
The footwear chain also invited five TikTok influencers—Bria Jones, JaNina, Rodney Lee, Everett Williams and Brittany Xavier—to help kick things off by creating videos of their own. Even Jennifer Lopez, who exclusively partnered with DSW earlier this year to sell her own line of shoes, got involved.

While the challenge was initially launched on TikTok, DSW distributed it across its social media channels for maximum effect, Stevenson said.

She expects the campaign, which has increased traffic to the retailer’s website, will lead to an increase in sales. (DSW declined to specify how much website traffic or sales have increased because it still collecting data.)

Stevenson views digital spending on social platforms such as TikTok to be more cost effective than television from an ROI perspective.

But there’s a less serious side to DSW’s marketing efforts. “We just wanted to add a little levity for our customers and our potential customers,” Stevenson said. “And we wanted to give customers opportunity to show off their shoes.”

One of the surprises for DSW was the diversity of the audience it’s reached on TikTok in terms of age and ethnicity, from teens to moms with young kids. The hashtag challenge was created to put the retailer in a new place and to connect with a new audience, Stevenson said, but it will lead to a broader strategy around building community and encouraging self-expression.

The emphasis on digital broadly was the result of the pandemic, given that people are spending more time on social media.

“We’re much closer to the customer—because we have to be,” Stevenson said.