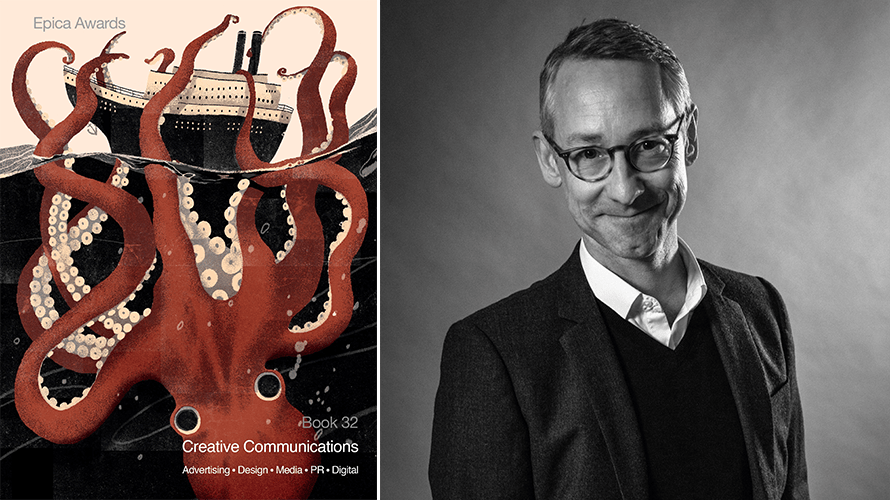 Every fall since 2001, Mark Tungate has edited the Epica Book, a hardback, glossy look at the previous years' best work. - Credit by Epica Awards

A jury of advertising journalists from around the world is convening in Amsterdam this week to select the best ads of the year—an honor distinct for two reasons. It’s the only show judged by an impartial jury, meaning no brands or agencies vote. And it comes at both the end and the beginning of awards season, which leads it to honor some famous ads with their first awards.

Adweek’s agencies reporter Minda Smiley is on the grand jury this year, and I participated last year. We had a chance to catch up with Epica’s longtime book editor and jury wrangler, editorial director Mark Tungate, heading into a week of deliberations. Every fall since 2001, he’s published the Epica Book, a hardback, glossy look at the previous years’ best work. And we had a fascinating discussion about his birds-eye view of creative trends, his favorite ads from recent years, practical tips for holding jurors’ attention and why you really need to redo your case study.

Adweek: What’s the history of the Epic Awards book?
Mark Tungate: Epica was launched in 1987, and with the very first Epica Awards there was already a book. The first grand prix went to a [TV] advertisement from The Guardian newspaper called “Points of View.” Literally behind my desk, I have the whole collection, and sometimes, it’s quite fascinating to delve into them and randomly open a book and see what was cool in 1995. You can see the whole evolution of advertising.

What stand out to you as the years when advertising really changed?
I think it started in about ’98-’99, when the internet and the digital world went mainstream. It was bubbling under before that, but agencies weren’t playing with it as much. There was one year, 2008, when the agencies suddenly discovered Facebook, and in every second campaign there was a Facebook element. In 2014-2015, Instagram suddenly became the thing. There’ve been these sudden peaks, and we’ll see what’s next.

What global themes did you notice in the winning work last year?
The big thing that came across was this whole move toward brand purpose, brands wanting to make a difference in the world. We saw that a little bit the year before, which is why we launched the responsibility grand prix last year. It was very prevalent. This idea brands didn’t just want to sell you something; they wanted to have a purpose behind what they were doing to have a positive impact on the world or on society. The McCann campaign “Price on Our Lives” won [the inaugural one].

There was also a lot of emphasis on gender equity. One of the grand prix was from DDB in Germany for  a campaign for Stabilo highlighter pens called “Highlight the Remarkable.” And it was about women who’d been the driving force behind innovations but had been hidden in the history books—it was bringing them forward.

What I also find people love every year is humor. So you have the Diesel campaign where they switched the letters [to Deisel], a stunt where customers thought they were buying fake Diesel merchandise, but they were actually buying real Diesel merchandise. I thought it was kind of brave, messing with the brand. I’ve noticed other people do that as well. Desigual reversed their logo in front of all their stores.

Are there any constants amid the technological change?
One thing that has never changed in my entire involvement with the book is this love of craft: a really well made, beautiful film or a beautifully written scrip with a great story. Shiseido won the film grand prix [last year], which everyone loved because the craft was impeccable. It was a great story with a happy ending. As the years go on, it’s still about that; it’s still about a really great story well told.

How are journalists judging differently than creatives?
We’ve given a few things their first award—”Epic Split” for Volvo trucks, the Fallon gorilla with the Phil Collins song for Cadbury. It’s one of the first campaigns that went viral. That apparently was a huge argument on the jury because the ad was so weird no one was sure they should give it an award or not, and then they gave it the film grand prix and it went on to win the Grand Prix in Cannes.

Something that’s caught the imagination of the advertising crowd because it’s a clever gadget or it’s a clever piece of technology isn’t necessarily going to win big at Epica because our jury is naturally skeptical, because they’re journalists and because they are looking for that extra, emotional craft element.

What kind of ads make you groan?
Oh, super complicated stuff. Already case studies are a problem because they’ve become a cliché in themselves. “We Have a Problem.” And then you have “Solution.” And then you have the “Results,” which don’t mean anything because you don’t understand the metric they’re using. Case studies in general as a model are problematic. You have to sit through loads of these.

If you can’t explain it in elevator-pitch terms, then probably it’s not going to do very well. Once you get past using three or four platforms to express your idea, the central idea gets diluted if not lost altogether.

What’s your best tip to agencies for awards season?
Some agencies think they can win a prize because they’ve made a great case film, but it’s not the case film that wins the prize, it’s the idea. Keep it short. Keep it simple. It doesn’t need to be super glamorous; it just needs to explain the idea.

What was the most unexpected campaign featured in the book?
I loved the film grand priz, the Shiseido film. It features a lesbian kiss at the end, which was extremely brave for the Japanese market. Nobody had ever seen anything like that before in Japan, so it felt very direct and honest and fresh and challenging, and it’s just a beautiful piece of filmmaking.

That was one of my favorite ads of the year. Although, I really thought you were going to say Michael Bolton [“Said I Read You but I Lied” Australian Audible ad].
[laughs] I forgot about Michael Bolton. It’s true that when you’re in a jury meeting, these things come along, and it’s a breath of fresh air. I always love actors and singers who are willing to satirize themselves.

What trends in creativity would you like to see catch on in the future?
Due to the state the media is in, print has died a death. We don’t see that many print entries. … Almost like people have started collecting vinyl records and cassettes, I’d love to see a return to good, old-fashioned print.