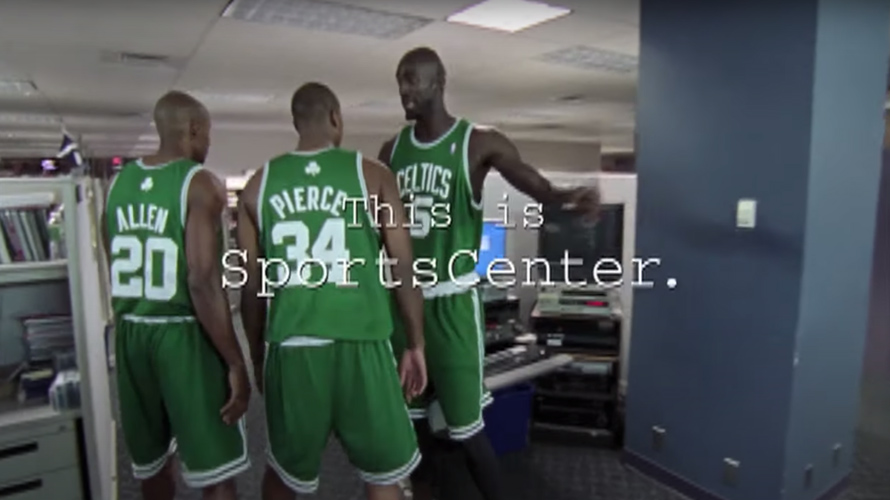 ESPN’s “This Is SportsCenter” campaign is one of the longest-running campaigns in television—spanning 25 years, more than 400 ads and many of the most iconic sports figures of the last three decades. ESPN’s celebrating the history of the ad campaign with a three-part special Sunday night.

The two-and-a-half hours of coverage will dedicate one hour to ads starring ESPN personalities, the next hour is to showcase the best spots with athletes and the final half hour spotlights mascot hijinks.

For the first 22 years, Wieden + Kennedy was behind the campaign, but ESPN eventually moved the production in-house with its internal agency, CreativeWorks, in 2017.

Adweek staffers picked their favorite spots from the last 25 years.

“I love how it captures the trepidation and mood of the time—should we be worried about Y2K? Maybe! But let’s just make fun of it anyway. Mark McGwire smashing computers, Kenny Mayne and Dan Patrick doing the show by candlelight and Charley Steiner saying, ‘Follow me. Follow me to freedom!’ are such classic moments now.” —Erik Wander, digital features editor

“It’s the gold standard of ‘This Is SportsCenter’ commercials. ‘Follow me. Follow me to freedom!’ is one of the funniest lines in an ad. I recited that line far too many times as a kid growing up in the golden age of SportsCenter.” —Jameson Fleming, senior editor, membership

“‘Crocodile Hunter’ Steve Irwin’s appearance alongside John Anderson isn’t just my favorite ‘This Is SportsCenter’ ad. It’s one of my favorite ads of all time. Released in 2006, shortly before Irwin’s tragic death, the spot is a wonderful reminder of Irwin’s charisma, humor and willingness to laugh at himself. It also ties in so much of what makes this campaign great: jumping into conversations mid-dialogue, having mascots—in this case Florida’s Albert E. Gator—nonchalantly interacting with an office environment and rotating in celebrities without putting them on a pedestal. It’s a spot that will always make me equal parts sad and happy, something I can’t say about any other ad.” —David Griner, creative and innovation editor

Anything With Scott Van Pelt

“Honestly, I don’t have a big favorite, but I enjoyed all of them when they came on because I felt like I was peeking into SportsCenter. I loved when they got athletes involved, and whenever Scott Van Pelt was included because he was like your tall uncle you invited to your living room whenever you watched. If I had to pick one, the one with him and the Celtics because I liked watching the rise of Ray Allen and Paul Pierce.” —Ko Im, community editor

“SportCenter’s Jay Harris’ delivery is a perfect summation of everything that works with these ads: They’re simple, short and hilarious. The fact that there’s a portal to hell in Bristol, Conn., is the icing on the cake.” —Ryan Barwick, travel and sports reporter

“As a die-hard Mets fan, any commercial featuring baseball’s greatest mascot is tops on my list. While Mr. Met is featured in several ‘This Is SportsCenter’ spots, this is my favorite because of his reaction to Josh Hamilton’s performance at the 2008 Home Run Derby. Turns out mascots—and baseballs—have feelings too.” —Breana Mallamaci, senior video producer

“Before Scott Van Pelt, there was Kenny Mayne and the late Stuart Scott sharing the spotlight in so many classic ‘This Is SportsCenter’ ads. My favorite stars both as they participate in a Big Brother Big Sister-like program, but instead of being role models, they channel their inner Bobby Knights. The icing on the cake is Scott blocking a child’s shot into oblivion.” —Jameson Fleming, senior editor, membership