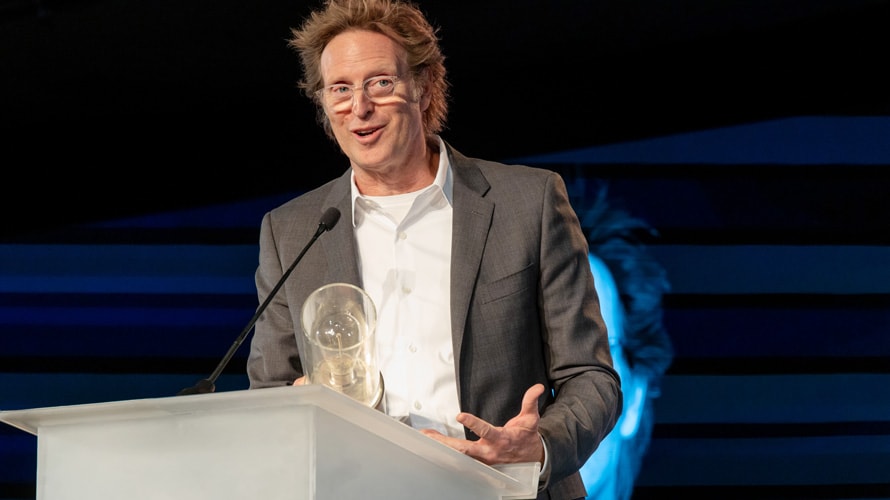 PALM SPRINGS, Calif.—Mike Benson, Amazon Studios’ erstwhile head of marketing whose creative drive and dynamic leadership helped create some of the most colorful experiential marketing of the past year, has been named Adweek’s Grand Brand Genius for 2019.

Benson accepted the honor Monday night at Brandweek, the magazine’s annual colloquium that draws the marketing world’s best and brightest for four days of presentations, immersive interviews and networking sessions.

Also celebrated were Chrissy Teigen, Adweek’s Brand Visionary for 2019, and entrepreneurial partners Sue Schwartz and Rusty Robertson, honored with Adweek’s 2019 Brand Save award for Stand Up to Cancer, the nonprofit they co-founded.

The Brand Genius Awards, which salute excellence in marketing and brand building, is the marquee event to take place during Brandweek. With over 800 senior executives from the country’s leading brands and creative shops in attendance, the 10 senior marketers named to the Brand Genius Class of 2019 ascended the rostrum to accept their awards at the JW Marriott Desert Springs Resort & Spa.

This year’s Brand Geniuses included New York Times CMO David Rubin, the driving force behind “The Truth Is Worth It,” a groundbreaking (and Cannes Lion-winning) campaign that struck back against the ubiquitous charge of “fake news” with the message that only in-depth reporting yields the truth, and that the truth is worth paying for.

Also honored was Stitch Fix CMO Deirdre Findlay, whose team created and staged “Everybody Deserves to Be Seen,” an event synced up with the Oscars that let everyday Americans don their best outfits and walk the red carpet to the flash bulbs of the paparazzi.

Additionally recognized was Emily Boschwitz, vice president of marketing for Hims, a personal-care brand whose provocative and effective marketing took on uncomfortable health issues such as male pattern baldness and erectile dysfunction with frank and humorous messaging that drew so many new customers to the company that it led to the creation of a parallel brand for women’s healthcare needs called Hers.

In addition to receiving a Brand Genius Award, Benson was voted this year’s Grand Brand Genius, an honor bestowed on just one of the members of the Brand Genius class in recognition of exceptional work that takes risks, generates attention and produces measurable results.

Charged with promoting Amazon Originals’ flagship programs, Benson, along with an in-house team and agency partners, conceived a variety of head-turning installations that pushed the envelope on experiential marketing.

To promote the Jack Ryan series, for example, attendees at San Diego Comic Con were given the chance to leap from a (stationary) helicopter. At SXSW, Benson’s team created the Garden of Earthly Delights, a sin-a-minute immersion spotlighting the Good Omens miniseries that included, among other things, decadent foods served up to the music of a live string quartet. Most ambitious, perhaps, was Benson’s resurrection of New York’s much-missed Carnegie Deli, whose steaming pastrami sandwiches made a brief return to customers’ plates in celebration of the series The Marvelous Mrs. Maisel.

Adweek was not alone in recognizing Benson’s talents as an executive. In September, CBS lured him to its own C suite as president and CMO. Benson nonetheless took time off to attend Adweek’s awards program.

“Now I feel so horrible for leaving Amazon,” Benson said, partly in jest, and clearly surprised at having been selected as the standout Brand Genius winner. “Now I have to call Jeff Bezos!”

On a more serious note, Benson pointed out to the audience of nearly 800 that because truth was a prevailing theme of the evening—a nod to Rubin’s campaign for the Times—it should also be a guiding principle in creative work. “Let’s be truthful in what we do,” Benson told those assembled.

Now in its third decade, the Brand Genius Awards—which up until 2011 were known as the Marketer of the Year award—have expanded to include the two additional important honors.

Schwartz and Robertson, founding partners of the Robertson Schwartz Agency, accepted the Brand Save honor, which the magazine’s editors created five years ago to spotlight the most innovative marketing in the not-for-profit sector. Stand Up to Cancer, with help from media and entertainment industry luminaries including Katie Couric and Sherry Lansing, has raised over $600 million, all of which the group has funneled directly into research.

A particular highlight of the evening was the Brand Visionary award, which this year went to model, author, TV host and outspoken public figure Chrissy Teigen. First awarded in 2012, the Brand Visionary honor recognizes a career’s worth of achievements not only in creating and endorsing brands, but also in the honoree’s ability to become a living brand herself. Past Brand Visionary honorees include Serena Williams and Anna Wintour.

From ordinary beginnings working in a California surf shop, Teigen became an international fashion model virtually overnight, then parlayed that fame into successful stints as a TV host and a cookbook author. As an endorser and influencer, she’s become the face of leading brands including McDonald’s and Hulu, and her own Cravings cookware line is among the best-selling housewares at Target.

Along the way, Teigen, whose Instagram following numbers some 26 million, has inspired millions with the unapologetic stances she takes on many social and political issues.

Held in New York since its start three decades ago, the Brand Genius Awards moved to Palm Springs this year to take advantage of the intellectual synergies of Brandweek, Adweek’s four-day caucus of executives from brands ranging from blue chips to upstarts.