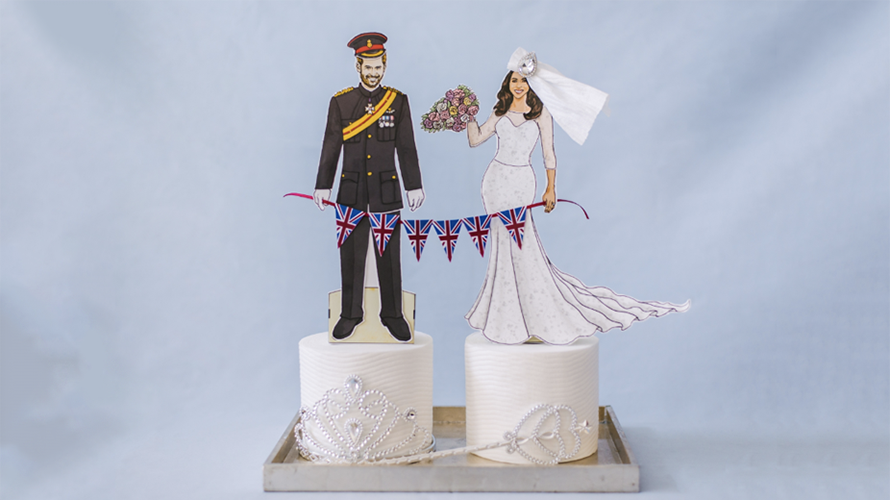 Cottonelle is giving away a year's worth of toilet paper. Cottonelle

The royal wedding between Meghan Markle and Prince Harry is nearly upon us and brands are not missing their time to shine. Several companies are releasing limited edition tchotchkes, hashtags and other wedding-inspired products in anticipation of Saturday’s nuptials and maximizing their media presence.

KFC has introduced a commemorative bucket in honor of the wedding. Prince Harry proposed to Meghan over a roast chicken dinner, which inspired the famous chicken chain to release a bucket marking the occasion. And for those determined to chow down in style befitting the royal couple, KFC is releasing 25 Kentucky Fine China buckets. A collaboration with agency Iris, the Kentucky Fine China bucket is a “marriage of the finest English tradition and the fine flavor of the American South.”

Stepping up to the memorabilia plate just in time for the big day, introducing the @KFC_UKI Royal Bucket - a perfect marriage of the finest English china & the fine flavor of the American South ????????????. Download the Colonel's Club app to get yours https://t.co/HzYnnuDTRm pic.twitter.com/9sz4BX7zct

When Lime-A-Rita heard the royals had not coined a marriage hashtag—an absolute wedding must-have in 2018—the brand took it upon themselves to introduce #HarryMakesHisMarkle. The company is inviting its social media followers to check out the Lime-A-Rita hashtag generator and follow its Twitter handle @TheRitas on Saturday for a play-by-play of the big day from Real Housewives’ Nene Leakes.

We made the best #RoyalWedding hashtag #HarryMakesHisMarkle Stay calm, we’ll write yours too: https://t.co/mkIBjzzGVF pic.twitter.com/ZoPPJXlBTt

You might not have a lemon elderflower cake at your wedding-viewing party, but that doesn’t mean you can’t eat your dessert in style. Dunkin Donuts has viewers covered with the Royal Love Donut. Meanwhile, Arc, Leo Burnett’s shopper marketing arm, has viewers literally covered by pairing the jelly-filled treats with fascinators, a traditional hat frequently worn to royal events. Check out Dunkin’s Instagram to see an array of these sweet headpieces.

Velveeta is promoting its “Crowns and Cheese” line with a guide on how to behave like a princess in an online spot from agency David Miami. Spoiler alert: The aspiring princess decides she’d rather “Eat Like a Queen.” (We’re sorry to report the campaign worked so well Velveeta has run out of Crowns and Cheese in advance of the big day.)

Sodastream is adding a little sparkle to the big day with 50 limited edition royal wedding bottles topped with royal hats. The bottles are being auctioned off and all proceeds will be donated to Surfers Against Sewage, a plastic-free charity. The royal couple has made its stance on reducing plastic waste known, and the DIY soda water brand is following on its heels by promoting the royal-sanctioned foundation.

Crown Jewels, a London-based prophylactic brand, is releasing a souvenir “musical condom” to ramp up the romance. “These artisan-style sheaths are tailored to a regal fit before being drizzled with lube and packed for freshness; they are truly condoms fit for a prince,” according to a statement.

Wayfair is picking up on the trend of casting a questionably lookalike royal couple to promote a gold toilet “fit for a prince,” and other disturbing royal gifts. The spot, a parody of the couple opening wedding presents, is meant to advertise its larger “regal sale” during the month of May.

Hidden Valley is giving away a $35,000 bottle of Ranch dressing to one lucky winner in celebration not only of the wedding, but also the lesser known holiday: National Ranch Day (which took place on March 10). The bottle is encrusted in diamond, sapphire and 18-carat white gold. The company hinted it plans to send Markle her very own bottle as, devastatingly, its Ranch dressing cannot be found in the UK. Hidden Valley has a history of grand Ranch-related gestures, including a Ranch keg and Ranch fountain.

✨FOLLOW & RETWEET FOR A CHANCE TO WIN! ✨ Nothing marks #NationalRanchDay like a real jewel-encrusted ranch bottle fit for people who royally love ranch.

Strongbow, a subsidiary of Heineken known for its hard cider, is releasing Rose hard apple cider and Royal Rose teacup sets, a perfect marriage of Britain’s love of tea and the American Rose fascination, to commemorate the Wedding and liven up tea parties worldwide.

Campbell’s is jumping on the wedding train with the release of its “Royal Wedding Soup,” which it touts as a “delicious marriage of flavors.” The recipe even incorporates zucchini, one of Meghan’s all-time favorite ingredients.

And for those committed enough to the Royal Couple to plan their own nuptials for the same day, Cottonelle is offering the chance to win a year’s supply of toilet paper and wipes featuring the Wavy CleanRipple, in partnership with blog A Practical Wedding. After all, one year is the paper anniversary.