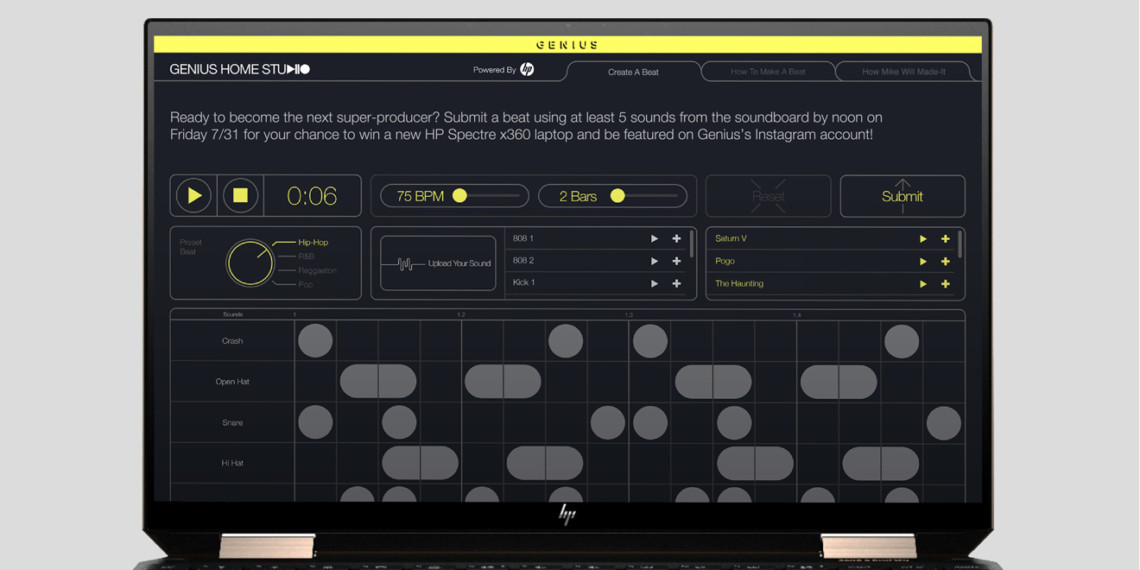 As brands continue to offer consumers resources to show off their creativity in quarantine, Genius and HP have launched a virtual program that provides an innovative look at the stages of creating an original song—and gives fans opportunities to make their own music, too.

The music media brand and encyclopedia, which has provided Behind the Lyrics playlists for Spotify since 2016, partnered with the tech company to launch Genius Home Studio. The branded content program offers aspiring artists tools to contribute to different aspects of song production, with help from established industry talent.

The ongoing series uses HP laptop technology to support each installment, including music production, songwriting, music video direction, dance and performance. Genius will release the original song at the end of the program.

Michael Heal, head of branded content at Genius, said the goal of the new program is “to give a new generation of aspiring artists a place to learn the basics of music production and be inspired to continue pursuing their dream of becoming superstar artists.”

We’re looking for the next hitmaker. ???????? Submit an original beat using our brand new #GeniusHomeStudio software, and flex your production skills for a chance to be featured on Genius‘s Instagram. You could win an @HP Spectre x360 laptop. ➡️ bio link to start mixing and for more info ???? Powered by @HP #KeepReinventing

The first installment is tied to music production; the brand worked with design studio Violet Office to create a custom microsite with a soundboard loaded with preset beats and sounds. Through July 31, fans are invited to create and submit a beat using at least five sounds for a chance to be featured on Genius’ Instagram channel and win an HP Spectre laptop.

To help fans, the microsite offers an interactive How to Make a Beat video tutorial. And for creators who have a preferred production software on their computer, the microsite also offers a downloadable Genius Home Studio beat pack. Genius will select its top four beats, split them into brackets and invite its Instagram followers to vote for their favorite.

For fans, Heal said the program is designed to engage anyone curious about making music and spotlight the collaborative nature of the process. He explained the production installment was designed to capture the feeling of playing a video game.

“Artists and producers have spoken at length about how they started making beats on FL Studio [software], because it felt like a video game,” Heal said. “We wanted to try and replicate that feeling throughout the whole Genius Home Studio site, especially in the Learn tab. The addition of the ‘at home’-inspired sounds like the pan crash, gas stove, keyboard and drip sounds really drives home this DIY creative.”

Heal said the brand received more than 1,000 beat submissions in the first 48 hours of the microsite’s launch.

If you want to become a successful producer in 2020, there’s no better person to learn from than @MikeWiLLMadeIt ???? Read up on his production tips and tricks ➡️ bio link #KeepReinventing Powered by @hp

The brand is also creatively tying in digital content featuring the aspiring and established musicians. The production installment includes an interview on the microsite with record producer Mike Will Made-It, who shares advice for aspiring producers.

Additionally, emerging producer Kelley Janáe will be featured in a spinoff episode of the Genius series Deconstructed, titled Deconstructed Sessions, slated to premiere July 31. Janáe will break down an original beat made using the beat pack, with Mike Will Made-It offering constructive feedback. The final version of Janáe’s beat will be placed in the original song.

Genius plans to roll out future program installments over the next few months, with similar content pairing emerging creatives and artist mentors, as well as fan interactions. Genius Home Studio will conclude with the release of a mini-documentary on its website and social platforms, highlighting the journey of making the original song.

Genius Home Studio isn’t the brand’s first partnership with HP. In 2019, the brands teamed for the Lyricist of the Year program, which tapped Genius’ Instagram followers to participate in a bracket challenge and vote for their favorite lyricist. Heal said the program garnered nearly 500,000 votes and its final Instagram Story was the brand’s most-viewed and engaged-with Story ever, with a 50% engagement rate.