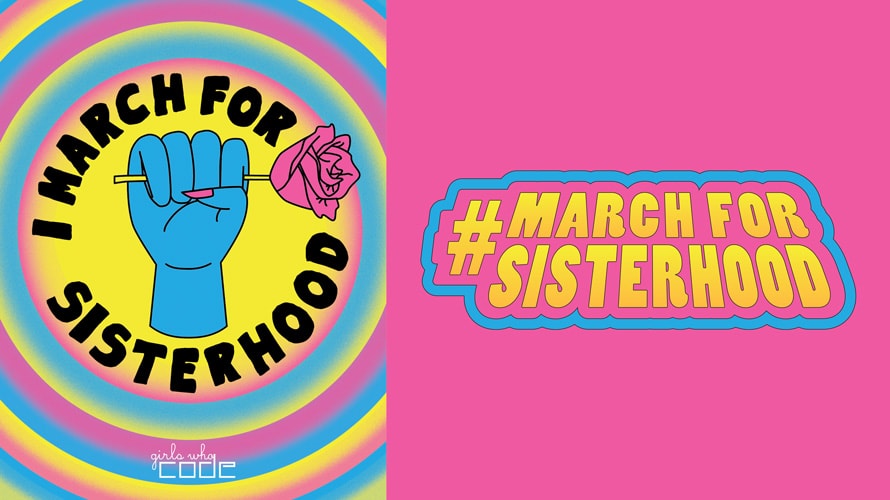 Girls Who Code hopes to create the largest online "march" with its #MarchForSisterhood campaign. Girls Who Code

So it makes sense that Girls Who Code, the nonprofit that hosts coding and computer science classes and camps for young women, would team up with TikTok as the official platform to launch #MarchForSisterhood, a digital “march” of women sharing videos and posts that represent what sisterhood means to them. The new initiative is tied to Girls Who Code’s celebration of the annual Day of the Girl on Oct. 11, and encourages girls to take a video of themselves marching for a cause they believe in and share it on TikTok.

Reshma Saujani, founder and CEO of Girls Who Code, said hosting the #MarchForSisterhood as a digital event made sense given how technologically active this generation is—particularly on TikTok. Girls Who Code’s chief marketing officer Deborah Singer said it’s also an opportunity to connect with a wider circle of girls.

“We know that this generation of girls is one of the most open-minded and civically engaged in our history,” Singer said. “We see it with the girls in our programs every day. The #MarchForSisterhood is a moment to celebrate the transformative social movements they are leading in communities all around the world, and to remind them that they are not alone. Sisterhood means having each other’s backs.”

The #MarchForSisterhood came together in part through the work of 100 activist women, including several recognizable faces: Isra Hirsi, the daughter of Congresswoman Ilhan Omar and an environmental activist; Claire Stapleton, the organizer of the Google walkout; Nadya Okamoto, founder of the nonprofit Period.; actress Jenna Ortega; and Reese Witherspoon’s daughter Ava Phillippe.

Girls Who Code worked with agency Moving Image & Content to create the initial TikTok posts to kick off #MarchForSisterhood, as well as videos and imagery to spread the word about the march. Quynh Mai, Moving Image & Content’s founder, said the goal was to encourage and embolden girls to create content in which they take a leading role—mirroring Girls Who Code’s message of giving women an opportunity to see themselves as computer programmers, a field traditionally dominated by men.

“We wanted to ensure that all of our strategic and creative work was powerful through the lens of the girls,” Mai said in a statement. “Knowing that user-generated content is much more than a selfie, we set out to empower every participant to tell their unique story of activism by showcasing their own #MarchforSisterhood experience via films and images.”

She added: “By ensuring that all of the narratives play a part in igniting an impactful movement, we are helping Girls Who Code build a community of powerful girls and women who expect to be the star of their own story, not just passive observers of culture and advertising.”