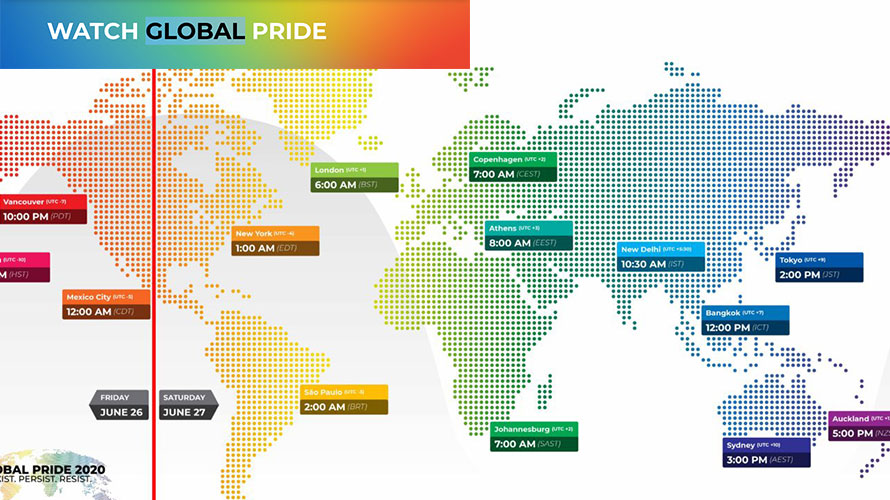 Over 90 nations around the world are participating, on every continent including Antarctica. - Credit by Global Pride

A couple of months ago, it seemed like LGBTQ Pride was effectively canceled for 2020 due to the pandemic. But thanks to the creativity and hard work of the many organizations and leaders who organize Pride festivals each year, the last weekend in June is shaping up to be bigger and busier than ever before. The only difference is, it’s all happening online.

Saturday marks the first-ever Global Pride, which was quickly organized after festival leaders around the world realized that the usual parades would not be possible. And while the sweat-filled dance parties and the glittery Pride swag will be missed, there’s something unique about moving Pride into the virtual sphere that no live event could ever replicate.

Global Pride has already made history, growing into the biggest LGBTQ festival ever. With over 500 organizations from over 91 countries participating over the course of a nonstop 24-hour program, Global Pride is poised to bring together a sort of queer United Nations that’s never been seen before. Every continent, including Antarctica, will be represented.

“[Global Pride] is our movement’s response to the Covid-19 crisis,” said J. Andrew Baker, head of partnerships for Global Pride. “Nearly 40 partners have supported us to make that vision reality. Even during an economic crisis, companies and their LGBTQIA+ employees have provided much-needed resources. Businesses around the world have a place in the fight for LGBTQIA+ equality and human rights protection, and each partner that has supported Global Pride is helping us to ensure the visibility of our community and to shout out for inclusion and the end of discrimination.”

Google and YouTube are the presenting partners of Global Pride, and other corporate partners include AARP, Facebook, Gilead Sciences, iHeartRadio, lesbian/bisexual publisher Diva Media Group, queer streamer Revry and Time Out Group. Donations to Global Pride will go toward supporting local Pride organizers hit hard by the financial losses stemming from this year’s canceled events. The packed schedule for the all-day event starts will be kicked off by host and emcee Todrick Hall.

The arts and culture portions feature performances by Bebe Rexha, Melanie C from the Spice Girls, Pussy Riot, Adam Lambert, Martha Wash, Kesha, the Village People, and more. Those celebrity appearances will be interspersed with global talent: Bulgarian singers, Regional Dance of Nepal, spoken word from Afghanistan, members of LGBTQ communities in Kenya and other African countries, and drag queens from Hong Kong, just to name a few.

Global Pride co-chair Natalie Thompson told Adweek earlier this month that she personally pushed for a Black Lives Matter partnership as soon as the George Floyd protests kicked off.

“As a Black woman myself … it would be unacceptable for me not to demand that this is a step that we take,” Thompson said. “We cannot continue moving forward unless we are addressing the issues that are happening right now.”

Thompson also serves as the vp of Washington, D.C.’s Capital Pride in addition to helping create this weekend’s global event. She explained the urgency behind pivoting to a virtual format so that this year’s Pride would not be canceled altogether.

“Many times, the celebrations are the only times LGBTQ people are able to interact and feel proud and feel safe,” said Thompson. “Sometimes it’s someone’s first Pride. It’s for the youth, it’s for seniors, it’s for everyone to build community and find resources.”