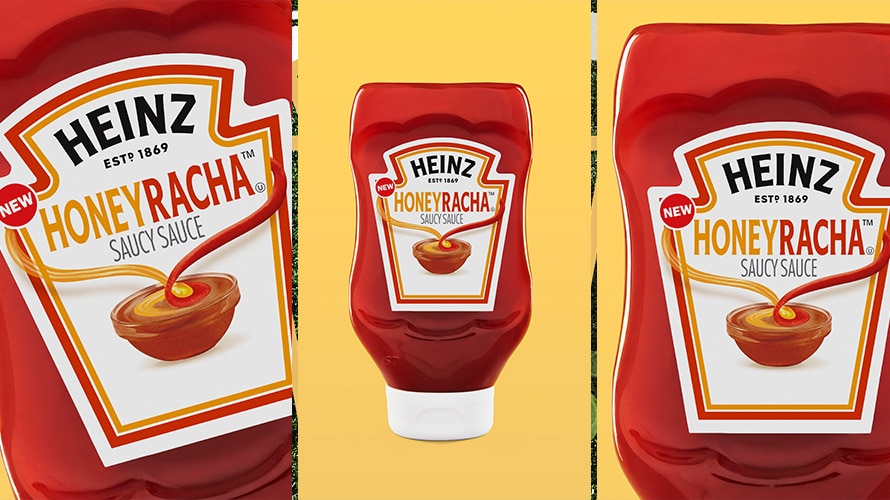 HoneyRacha, a blend of honey and Sriracha chili sauce, is expected to hit the shelves this spring. - Credit by Heinz

After a three-year timeout from Super Bowl advertising, Heinz is headed back on the field during Super Bowl 2020’s second quarter with a 30-second spot directed by Roman Coppola.

This will be Heinz’s third Big Game ad in 20 years, with its last Super Bowl advertisement airing in 2016. The spot showcased a stampede of wiener dogs in hot dog costumes dashing toward the Ketchup Zone, where a family decked out in Heinz condiment costumes stood hand-in-hand.

“There’s no better stage than the Super Bowl to bring the goodness of ‘America’s Favorite Ketchup’ to everyone and anyone,” Ashley Tople, head of brand building for sauces and meals at Heinz, said in a statement.

Though the spot will be more ketchup-focused overall, Heinz’s latest flavor concoction, the HoneyRacha, will reportedly be a tangy and sweet guest star. The condiment maker confirmed to Delish that HoneyRacha—a blend of honey and Sriracha chili sauce—will appear on shelves this spring.

The Coppola-directed ad will be Wieden + Kennedy’s first project with Heinz as its newest agency partner.

“We’re eager to kick off our relationship with Kraft Heinz through this Super Bowl campaign,” said Laddie Peterson, creative director at Wieden + Kennedy New York. “It’s safe to say you won’t see any other work like it.”

Coppola, recognized for his directorial and screenwriting work in acclaimed films and television series like Moonrise Kingdom, Mozart in the Jungle, The Darjeeling Limited and Marie Antoinette, is apparently also a “huge fan of Heinz.”

The news comes after a tumultuous year for Kraft-Heinz. Both CEO Bernardo Hees and CMO Eduardo Luz left their posts last year. Luz was replaced by Miguel Patricio, who previously served as CMO at Anheuser-Busch.