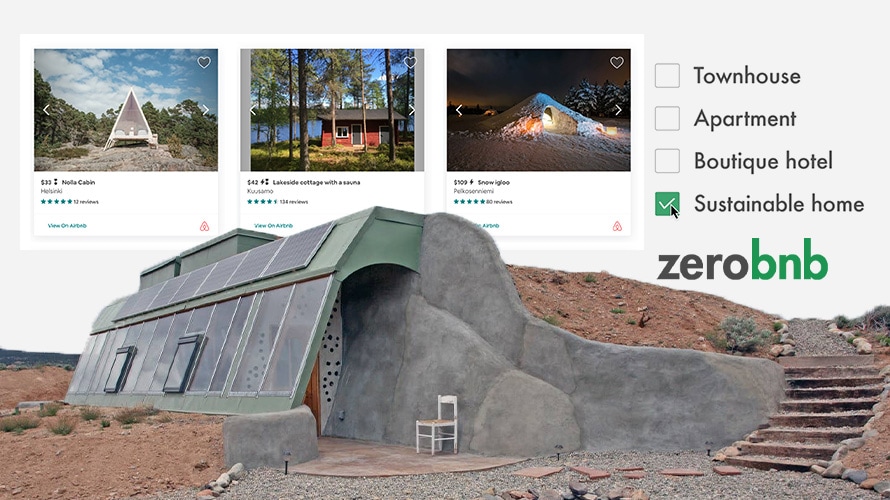 Zerobnb is an attempt to get Airbnb to list sustainable homes on its site. - Credit by zerobnb

From the number of bedrooms and bathrooms to the option of a full-size kitchen, Airbnb has always benefited from the customization that’s possible with its search feature.

But, as consumers and the travel industry become more environmentally friendly, there is one potentially significant search option missing. And the city of Helsinki thinks it has a solution.

In partnership with the agency TBWA\Helsinki and Neste, one of the world’s largest producers of renewable diesel, the Finnish city created Zerobnb, a spoof of Airbnb featuring homes that have a lower carbon footprint, in an attempt to garner attention from the home-sharing site and get it to list more sustainable homes. Zerobnb features a listing of sustainable, environmentally friendly homes pulled from Airbnb including a lakeside cottage in Kuusamo, Finland; a solar-powered home in New Mexico and a tree house in Hawaii. Each home links back to the listing on Airbnb that inspired it.

“[Airbnb] has a category for basically everything, but nothing on sustainability,” said Iikka Maunumaa, a partner and account director at TBWA\Helsinki. “It’s a little bit of a risky move to start poking fun at a large corporation but hey, it’s 2019. We should be able to talk about these things … And we say it in a nice way.”

In a font similar to Airbnb’s, Zerobnb’s website explains, “We love Airbnb. But there’s one thing missing from our favorite service: a category for sustainable homes.”

Zerobnb was inspired in part by the Nolla Cabin, a carbon-neutral cabin created by Neste and TBWA\Helsinki in 2018 to show how a traveler could have a minimal carbon footprint. After the cabin became a hit on Airbnb, the city’s marketing agency reached out to TBWA about pitching Airbnb sustainability. The Nolla Cabin is now the first listing on Zerobnb.

Hey @Airbnb! ???? Let’s make sustainable living available for all of us. For #ClimateActionDay @nesteofficial is introducing #Zerobnb, a cheeky nudge to encourage you to add a category on your website for sustainable homes. Are you up for the challenge? Link in bio, check it out.

Even though Helsinki didn’t advertise Zerobnb, the site received submissions from around the world, including the U.S., Indonesia and Austria.

The site wasn’t supposed to be taken very seriously, Maunumaa said, but Zerobnb could serve as an example, albeit a tongue-in-cheek one, of how a brand can incorporate more sustainable practices.

“Radical collaboration is the way to solve problems that are too big for anyone to solve independently,” said Tia Hallanoro, director of brand communications for Helsinki Marketing, the city’s marketing company. “If Airbnb would simply give an incentive for a host to switch to renewable energy choices, the impact would be massive and measurable.”

According to researchers, the travel industry is responsible for about a tenth of the world’s carbon emissions.

In August, Helsinki launched Think Sustainably a city guide that promotes local, sustainable businesses to tourists. In order to be listed, a service provider must meet certain criteria, like switching to LED lights or using renewable energy. With headlines like “3 Ways To Spend a Sustainable Day in Helsinki” and invitations to the city’s carbon-neutral art and music festival, Flow Fest, the site has already attracted 400,000 visitors in its first month, about 70,000 more than Helsinki’s visitors’ site, My Helsinki, typically gets.

Like Zerobnb, a business doesn’t have to be carbon neutral, just as long as it shows that it has taken steps towards a zero-emission future.

Helsinki’s goal is to be carbon-neutral by 2035 and reduce greenhouse gas emissions by at least 80% from 1990 levels, according to Think Sustainably.

Manunumaa said there was a conscious effort with Zerobnb and Think Sustainably to avoid the doom and gloom that characterizes much of the conversation around climate change.

“I think what we have tried to do with these campaigns is show solutions … and remain optimistic and positive that we can still do something,” he said.

Airbnb did not respond to a request for comment from Adweek but, Hallanoro said, “They loved the idea.”

“At this moment, we are proposing something to Airbnb, and they are open to our idea … Helsinki is a small market but what we’ve done could be scaled up,” she said.