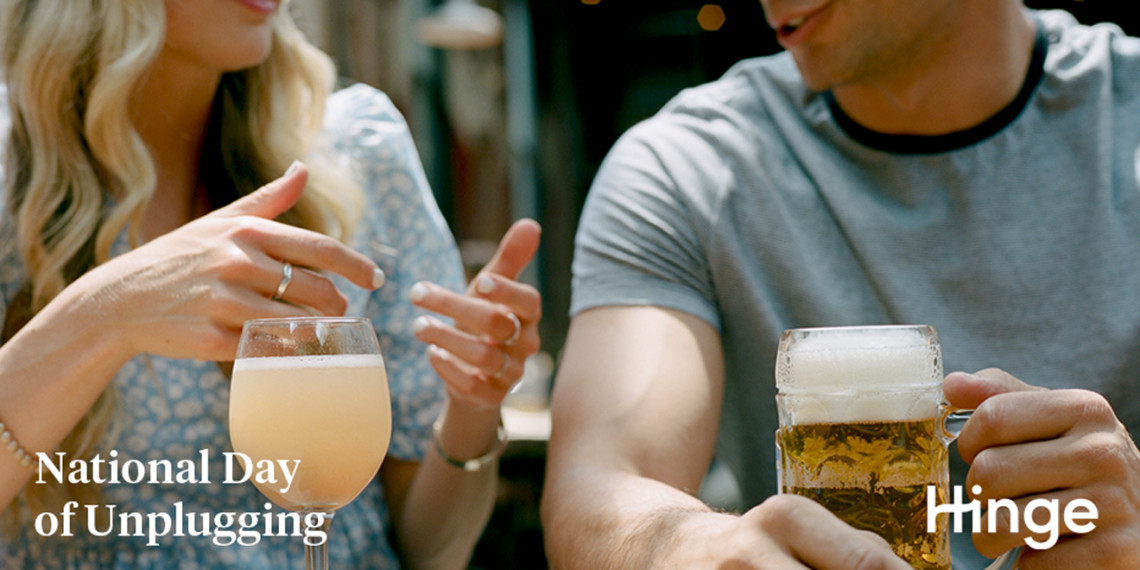 If you schedule a Hinge date this weekend, you might be able to score $100.

Timed to National Day of Unplugging on March 6, the dating app has announced a new incentive for users to schedule IRL dates. The brand will offer 250 users $100 e-gift cards if they pause their Hinge accounts and schedule a date within a 24-hour time period beginning 4 p.m. ET Friday. 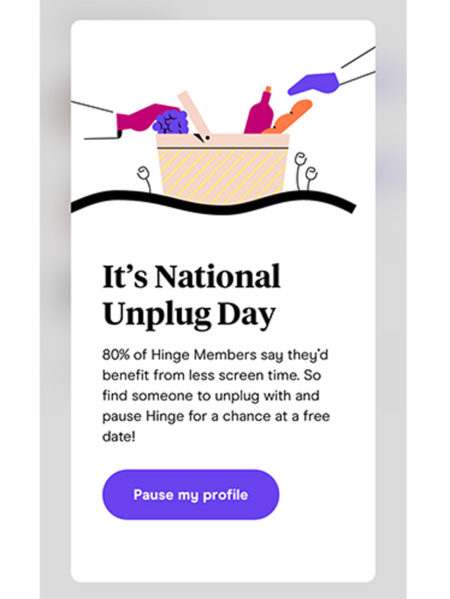 The promo is based on data from users who want to spend less time on their phones.
Hinge
Hinge introduced a “We Met” feature in 2018 as a way to measure app success. The feature invites members to privately share how their date went after they exchange numbers in the app and whether or not they planned a second date.

User data inspired the promotion. According to the brand, 80% of Hinge users reported they would benefit from less screen time on their phones, up from 77% who reported the same last year.

“Introducing people on Hinge is just the beginning of a connection,” said Nathan Roth, CMO, Hinge, in a statement. “The real magic happens in person and in real life. We’ll never stop encouraging our users to meet up, and this Friday, we’re excited to give them a little extra incentive to set up a date and put Hinge away.”

Hinge’s promotion for National Day of Unplugging is also the brand’s latest effort tied to the ongoing “Designed to be Deleted” messaging, which encourages users to go on dates with the goal of getting into a committed relationship and deleting the app. The brand launched the campaign in 2019 with the introduction of mascot Hingie—a furry white cube who dies when users find love. Past projects tied to the campaign have included an online Hingie merchandise shop that sold products meant to be destroyed.

The brand’s promotion runs through March 8 (or whenever $25,000 in gift cards is claimed) and will offer the prizes on a first-come, first-serve basis. Hinge, which was acquired by OKCupid and Tinder owner Match Group in 2019, has previously used creative out-of-home messaging and social media partnerships with brands like Snapchat to get more consumers to download the app.

Hinge isn’t the only brand to recently offer consumers cash as part of a promotion. In fall 2019, CBD-infused beverage brand Recess set aside $3,000 to pay consumers $3 each to share its post on Instagram.

Jewish arts and culture nonprofit Reboot launched National Day of Unplugging in 2009 to raise awareness of the potential long-term impact of smartphone use on mental health. For the 11th event on Friday, the nonprofit is co-hosting partner events and programs including “The Technology of Human Connection,” a conversation forum with Facebook in New York.