The Weeknd is cutting ties with the brand over the controversy 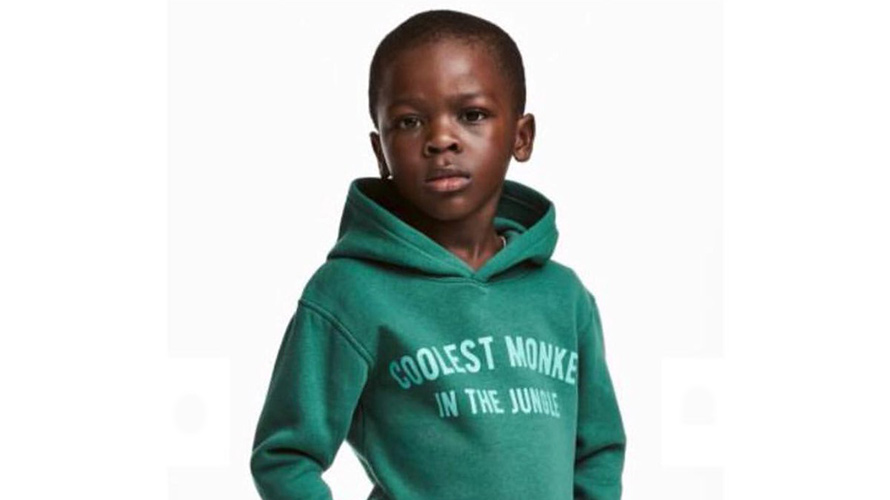 H&M is kicking off 2018 with a tone-deaf product that went viral Sunday night. Twitter users noticed that the brand’s U.K. site was selling a green kids’ hoodie stamped with the phrase “Coolest Monkey in the Jungle.” That could have been nothing more than a cute garment—except for the fact that the Swedish retailer used a black child to model the sweatshirt, a choice that Twitter users pointed to as “casual racism.”

. @hm, have you lost your damned minds?!?!?! pic.twitter.com/EYuCXLZtv3

Worse still: H&M modeled the two other versions of the sweatshirt (one reading “Mangrove Jungle Survival Expert,” and the other simply patterned with various jungle animals) using a white child, making it difficult to view the racial slur—especially one with centuries of history—as just an unfortunate mistake. H&M has not responded to a request for comment.

In the year 2018 there’s no way brands/art directors can be this negligent and lack awareness. If look at other sweaters in same category they have white kids. We have to do better. pic.twitter.com/Av4bS4t6yn

The choice was met with a wave of backlash on Twitter, with one user calling the move “inappropriate, offensive, and racist.” “Why is the white kid a ‘jungle survivor’ and the black kid the ‘coolest monkey in the jungle’?” the user continued, adding that the clothing should be removed from stores.

While H&M spokeswoman Anna Eriksson said in a statement to CNNMoney that the image has “been removed from all H&M channels,” the hoodie is still for sale on its U.K. website. “[W]e apologize to anyone this may have offended,” Eriksson said.

However, the apology fell flat for many users, who are calling for a brand boycott as well as the firing of employees associated with the decision. H&M follows in the footsteps of Dove, which apologized for an image that featured a black woman taking off a shirt similar to her skin tone to reveal that she had turned into a white woman wearing a shirt similar to her skin tone. The lesson from Dove’s mistake, which can be applied to H&M, is brands should avoid generating images that could be read as having a racist message.

Update 1/9/2018: The Weeknd announced in a tweet on Monday afternoon that he’s cutting ties with H&M. The Weeknd began modeling in H&M ad campaigns and working on his XO brand last year; saying that he’s “shocked and embarrassed” as well as “deeply offended” by the photograph. The artist tweeted that he “will not be working” with the retailer anymore. Rolling Stone reports that a source close to The Weeknd confirmed the singer will no longer work with H&M.

woke up this morning shocked and embarrassed by this photo. i’m deeply offended and will not be working with @hm anymore... pic.twitter.com/P3023iYzAb

Other stars like Questlove, Diddy and Lebron James have blasted the brand on Twitter and Instagram. “We as African Americans will always have to break barriers, prove people wrong and work even harder to prove we belong,” James wrote on Instagram.

Put some respect on it!! When you look at us make sure you see royalty and super natural God sent glory!! Anything else is disrespectful. pic.twitter.com/QVaxgngwh1

@hm u got us all wrong! And we ain't going for it! Straight up! Enough about y'all and more of what I see when I look at this photo. I see a Young King!! The ruler of the world, an untouchable Force that can never be denied! We as African Americans will always have to break barriers, prove people wrong and work even harder to prove we belong but guess what, that's what we love because the benefits at the end of the road are so beautiful!! #LiveLaughLove❤️ #LoveMyPeople??????‍⚖️??‍⚖️

“We understand that many people are upset about the image. We, who work at H&M, can only agree,” the brand told Pitchfork in a statement. “We are deeply sorry that the picture was taken, and we also regret the actual print. Therefore, we have not only removed the image from our channels, but also the garment from our product offering globally. It is obvious that our routines have not been followed properly. This is without any doubt. We will thoroughly investigate why this happened to prevent this type of mistake from happening again.”

Update 1/10/2018: Following in The Weeknd’s footsteps, G-Eazy has cut ties with H&M in an announcement on Twitter.

The rapper wrote that while he was “genuinely excited” about his collaboration with H&M, his enthusiasm “quickly evaporated” upon seeing the image, and he’s “decided at this time our partnership needs to end.”

“Whether an oblivious oversight or not, [i]t’s truly sad and disturbing that in 2018, something so racially and culturally insensitive could pass by the eyes of so many … and be deemed acceptable,” he wrote, adding that he doesn’t want his name and brand “associated with a company that could let this happen.”

Meanwhile, the brand posted a statement on its blog about the blunder, saying that while the “incident is accidental in nature,” that “doesn’t mean we don’t take it extremely seriously or understand the upset and discomfort it has caused.”