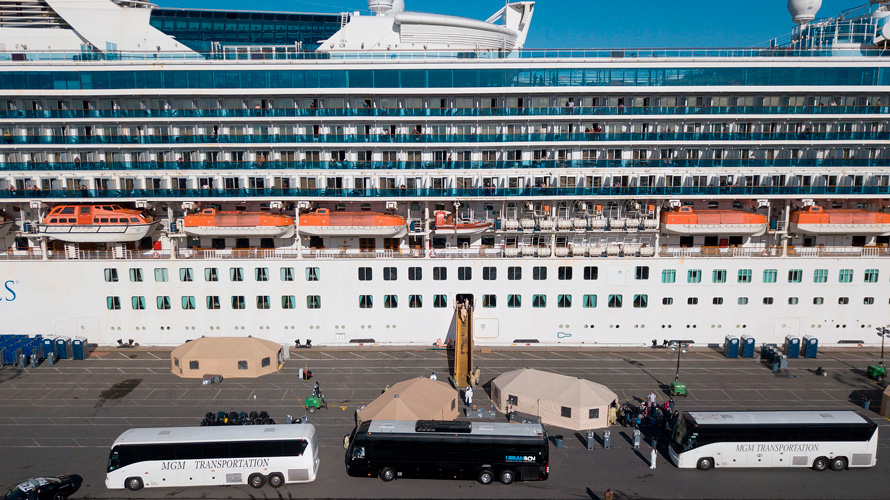 Princess Cruises, which is owned by Carnival, and Viking Cruises are pausing operations for at least two months. - Credit by Getty Images

Kristy Adler has never seen anything like the coronavirus outbreak unfolding worldwide. A travel agent who has specialized in cruising for more than 30 years, her phones have been ringing constantly—with customers asking about cancellations and refunds.

“Never have I seen so much chaos, confusion and panic in travelers, especially over the last two weeks,” Nadler said. “It’s depressing, having cancellations left and right.”

Although the cruise industry is only one piece of the travel ecosystem, Adler’s experience this week is indicative of the tsunami of horrors that has crashed over the industry since coronavirus became part of our nomenclature.

This was supposed to be a banner year for cruising, with ships anticipated to carry more than 32 million passengers in 2020. But with more than 130,000 confirmed cases of coronavirus worldwide and several high-profile outbreaks aboard cruise ships, the industry has taken some heavy hits, including at the stock market.

“Nobody is certain what’s going to happen,” Adler said. “People are concerned that if they travel, they are going to get caught up in this—that they’ll be quarantined, or that they won’t be able to get back [home].”

Today, Princess Cruises, which is owned by Carnival, announced that it would pause operations for at least two months. Viking Cruises also announced a similar suspension until May.

“By taking this bold action of voluntarily pausing the operations of our ships, it is our intention to reassure our loyal guests, team members and global stakeholders of our commitment to the health, safety and well-being of all who sail with us,” said Princess Cruises president Jan Swartz in a statement.

They’re not the only ones to put operations on hold. Richard Branson’s latest venture, Virgin Voyages cruise line, had been set to launch at the end of March, but the company announced today that its inaugural sailing would be postponed until July.

“At this time, much of our attention is focused, rightly, on the current global health crisis. We have spent time talking to our team, future sailors and travel partners as we navigate this challenging moment,” said Branson and Virgin Voyages CEO Tom McAlpin in a statement.

While Virgin emphasized that it had “absolutely no health issues aboard our ships,” Princess’s pause isn’t shocking considering that two of its ships have experienced coronavirus outbreaks. In February, hundreds of people became infected with the coronavirus aboard the Diamond Princess while it was docked in Japan. Later that month, the Grand Princess was held outside of San Francisco as government officials debated what to do with sick passengers onboard.

The bungling of Princess’s quarantined ships ultimately led to the U.S. Department of State releasing a statement warning citizens that they “should not travel by cruise ship,” and that there was an increased risk of infection in a “cruise ship environment.”

When asked about the State Department’s notice to travelers, CLIA sent a statement to Adweek that out of the 272 ships in the its members’ fleets, “there have been very few ships affected, which we believe points to the effectiveness of our policies. The situation is changing rapidly, and we are changing with it appropriately.”

On Wednesday, Norwegian Cruise Line was accused of misleading customers about the severity of coronavirus by the Miami New Times, which cited a whistleblower on the brand’s marketing team.

According to the publication, among talking points given to help concerned customers was “the only thing you need to worry about for your cruise is, do you have enough sunscreen?”

The whistleblower told Adweek through direct messages that even though the coronavirus threat was well known, Norwegian didn’t reduce its sales team’s normal booking quotas.

Norwegian did not respond to a request for comment.

“We’ve never seen anything like this; I don’t think they’ve ever seen so much bad press,” said Nicolas Graf, an associate dean at New York University’s s Tisch Center of Hospitality.

As far as the business impact of the virus, Graf sees COVID-19 affecting the cruising industry specifically in the short to medium term, noting that those who routinely cruise will return. But for now, he believes the industry should pause operations to limit the damage.

“From a provider’s standpoint, canceling cruises is the thing to do. Right now, everybody is in panic mode,” Graf said. “They need to avoid any unnecessary bad press, and that requires canceling all the cruises.”

How are customers dealing with uncertainty?

Mandi Carmean, an elementary teacher in southern Delaware who’s no stranger to snot and sickness, purchased a Royal Caribbean cruise for her family last September, well before the first cases appeared in China. Set to sail in April, Carmean was unsure what to do given that she’d be traveling with two young children and her parents, who are in their early 70s.

“We wanted to all celebrate together; we wanted to do a family vacation,” Carmean told Adweek on Tuesday. “We don’t know what to do right now. It’s kind of a wait-and-see for the next month.”

Today, she and her husband were on the phone with their travel agent asking for more information.

Not all cruise carriers have halted operations, however. Unlike Viking and Princess, Royal Caribbean cruises are still scheduled to sail, even though the brand has given guests the opportunity to receive a refund and credit for a future cruise.

“I’m more concerned about being quarantined on the ship,” Carmean said. “I don’t want to be locked in my room with the two kids and the parents—that’s not how I want to spend my vacation.”

Sarah Engman, a theme park photographer in Orlando, Fla., purchased her cruise in mid-February when the coronavirus had already overwhelmed parts of China.

“We’re suckers for good deals,” Engman said. “It was definitely a concern, but at the time we booked it, it wasn’t as prevalent in America.”

Engman declined to say which company she chose for her trip, which is set to sail on April 20, but said she trusted the cruise line.

“If [the cruise line] decided to cancel the cruise, that’s in the best interest; if they decided they won’t, we’re going to go on it,” she said. “I work at one of the largest theme parks in the world—I don’t think I’m going to get the virus from being on a cruise ship.”

But, for the first time, Engman and her mother will be cruising with travel insurance.