IHOP has been offering a full menu of Addams Family-centric items. IHOP

The animated movie is the latest in a string of adaptations of the long-running comic that has seen iterations as a 1960s TV show and two 1990s feature films. This time around, it features the voice talents of Charlize Theron as Morticia Addams, Oscar Isaac as Gomez, Chloë Grace Moretz as Wednesday and Finn Wolfhard as Pugsley. In the movie, the quirky Addams clan encounters some resistance from the residents of the New Jersey suburb they move to as their unusual antics bring a lot of unwanted attention their way.

The opportunity afforded by the natural connection between The Addams Family and Halloween is one that MGM, the studio releasing the film, leaped at on a number of fronts.

“The Addams Family is for all audiences,” says Robert Marick, evp of global consumer products for MGM, adding that the studio “looked at the property and the timing and knew we wanted to be the No. 1 consumer product this Halloween.”

To that end, the studio has engaged with more than 30 consumer products licensees across 12 categories to offer something that will appeal to everyone.

Younger fans who might be encountering The Addams Family for the first time might want a Wednesday costume or one of the beginning reader books from Harper Collins. Older audiences with long-lived nostalgia for the characters will find plenty of merchandise available as well. In particular, Cost Plus World Market signed on as partner, offering specially created movie-branded items that can be found in stores as part of a special themed display.

“This is a global push, with an equal amount of merchandise in many territories,” says Marick.

And it’s not just a one-off effort. According to Marick, MGM wants to establish The Addams Family as a perennial play, one that becomes synonymous with Halloween well into the future. Consumers in the U.S. spent $9 billion on costumes, candy, decorations and more last year, according to the National Retail Foundation. 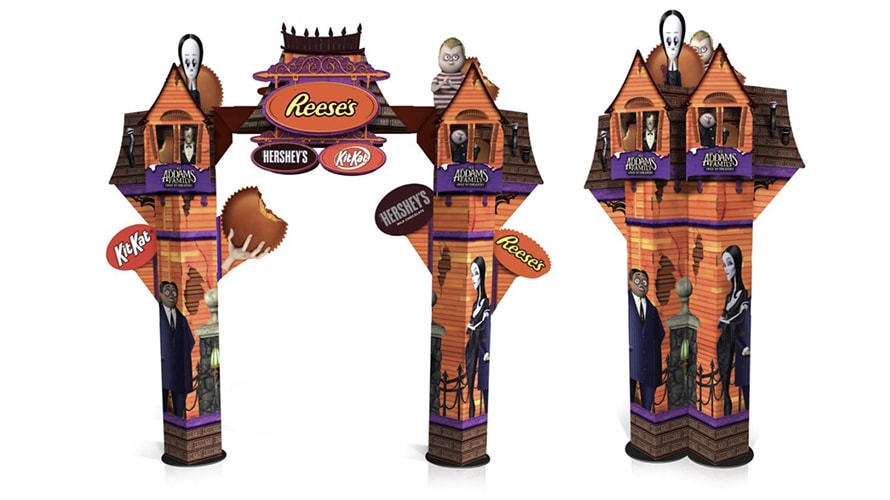 Reaching as many audiences as possible is vital for movie campaigns, so when Hershey’s approached MGM a year and a half ago, the studio saw an opportunity to partner with a dominant in-store brand with placement not only in candy aisles but at point of purchase and other store locations.

All told, more than million bags of “fun size” assortments and 20 million individual bags of Hershey’s candy will feature Addams Family branding. More than 20,000 in-store displays have been placed nationwide to catch people’s attention. Hershey’s will be running its own cross-promotional campaign across social, TV, online and email to support the effort.

MGM is working with 12 other promotional partners in the build up to The Addams Family, including:

Movie branding has been added to the menu, which also features new items based on the characters. Support includes custom TV spots, social media and more.

Addams Family characters will be added to the packaging of Boo-Berry, Franken Berry and Count Chocula cereals.

Costumes and party materials for all ages are available at retailers across the country. “When you look at the characters and how compelling they are, you can’t help but fall in love with the costumes,” Marick says.

Radio, TV and digital marketing will support a campaign that includes DIY videos on the company’s YouTube channel showing how people can use their Goodwill finds to create movie-inspired costume and decorations.

Addams Family Halloween Decor will be featured in over 270 stores nationwide, including products inspired by the new movie and the classic TV show. A social media “How Weird Is Your Family” photo contest will be run where entrants can win prizes. “We saw Cost Plus as a great place to reach home decor shoppers,” said Bruno.

Addams Family characters will be added to millions of packages of frozen pizza, with additional support coming via point of purchase signage.

Beyond those mentioned above, additional partners include ValPak (sending residents movie-branded coupon books) and Alchemy3 (three new movie-themed instant/scratch games supported by TV, digital and in-store marketing), and Scholastic (offering the “Every Family is Unique” program encouraging students to focus on what makes their families special).

In total, the partnerships are expected to add $150 million in media value and 1 billion impressions to the movie’s campaign.

Early reviews of this latest cinematic incarnation of The Addams Family have yet to appear, but early tracking predicts an opening weekend of around $20 million. What’s been clear in the campaign to date is that MGM sees the film as a way to celebrate the oddballs in society, those who live their lives by their own rules. That’s a message the family has been sending since the 1930s and one that’s no less relevant today than it was then.