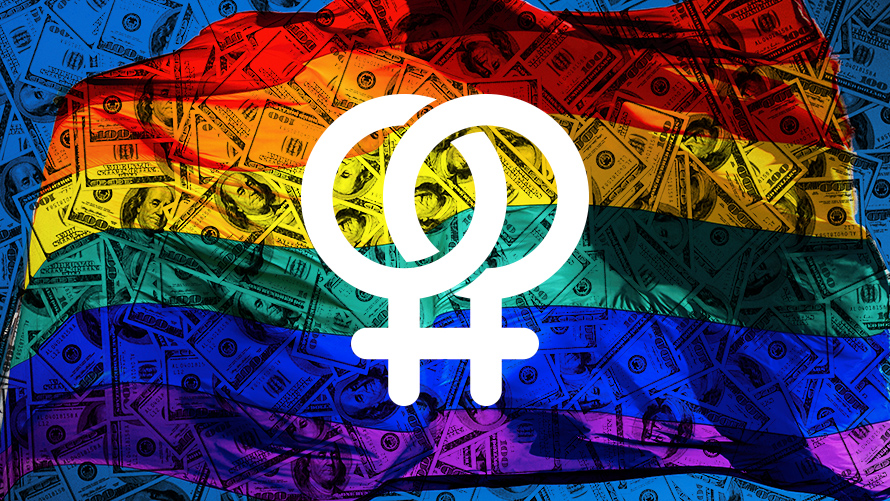 Lesbian Visibility Week isn't just about putting a face to the community, it's also about getting brands and advertisers to see queer women as a viable market. - Credit by Photo Illustration: Dianna McDougall for Adweek; Sources: Getty Images

Monday marked the start of the first annual Lesbian Visibility Week, an effort launched in the U.K. that aims for global participation. While the event kicks off a new addition to an ever-evolving equality calendar of special days and occasions that recognize different underrepresented communities, there’s something genuinely unique about Lesbian Visibility Week: The organizers managed to get corporate sponsors.

Corporate backing is notoriously hard to come by in the lesbian community. From high-traffic queer women’s media outlets like Autostraddle struggling to sell ads to marketers wrestling with how to “place” lesbians, LGBTQ women’s media, events and nonprofits don’t see the kind of cash that’s thrown at marketing to gay men, at least anecdotally. It certainly doesn’t help that the word “lesbian” itself appears on negative keyword lists used by ad ops professionals to ensure brand safety.

But U.K.-based Diva magazine is flipping the script. Diva staff is behind the inaugural Lesbian Visibility Week, and the organizers decided that one of the goals of the event was to convince brands to increase support for queer women. 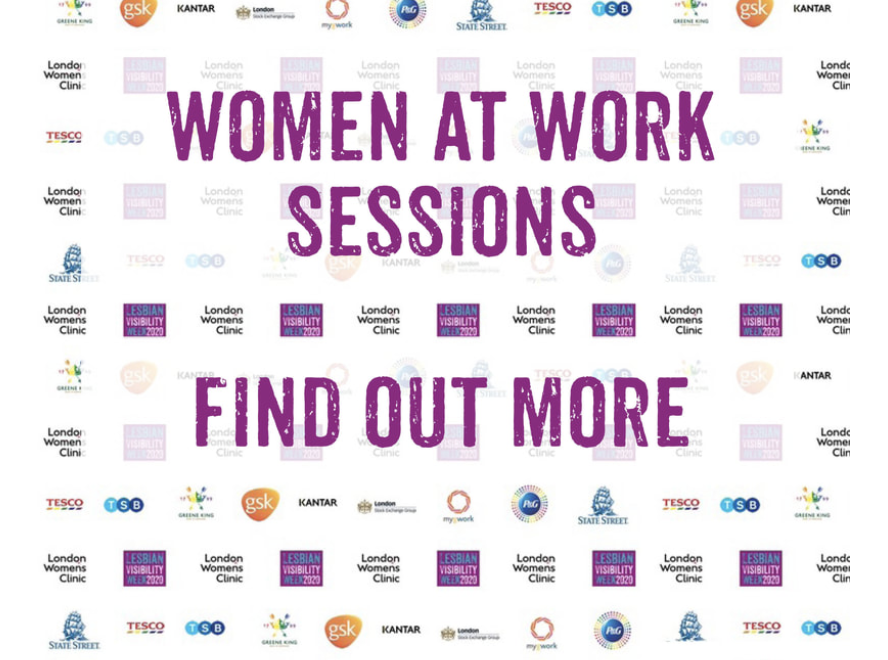 “I once opened a magazine [called] ‘Out in the City’ for LGBTQI men, and despite [Diva] already being a hugely successful and established women’s brand, people would pay double rates for an advert in the unknown male brand,” Riley told Adweek.

Riley said she’s long struggled to sell tables and sponsorships for the annual Diva awards. But when she launched a similar event in 2019 called the Rainbow Honours that caters to the broader LGBTQ community, tables quickly sold out.

“Brands are more reluctant to cover LGBTQI women because of myths that we just don’t have the money,” said Riley.

All of that appears to be changing with the launch of Lesbian Visibility Week. It’s sponsored by global brands such as Procter & Gamble, GlaxoSmithKline, L’Oréal and Getty Images. The event itself consists of a social media campaign titled #ThisIsMe, a pullout section in the Guardian profiling 100 lesbians and a virtual conference with multiple daytime and evening sessions taking place online that focus largely on LGBTQ women professionals.

Diva’s partnership director Polly Shute said she was able to leverage some of her contacts from previous work with general interest LGBTQ initiatives like London Pride after noticing a lot of brands were working with men’s events, but not women’s events.

“The LGBTQ networks [at brands] are usually run by men,” said Shute. “Gay men usually want to sponsor things they can go to, so it’s been really difficult to get sponsorship for women’s events.”

Shute recalled being blunt in conversations with LGBTQ budget leaders at several brands. “I’ve literally pushed them and shamed them,” she said.

Shute pointed out that very little, if any, of their LGBTQ budgets went to women and said one leader at a national food service corporation told her, “You’re right, I looked at our portfolio, and we aren’t doing anything for women.”

In the queer women’s community, being ignored by advertisers has long been a subject of frustration. In 2016, a BuzzFeed story suggested that while lesbian, bisexual and pansexual women are relatively cheap to reach through queer women’s media, advertisers seem to have no idea how to approach the community.

The budget imbalance in the U.K. is a familiar refrain to lesbian media and other queer women’s groups in the U.S.

In March 2019, Autostraddle publisher Riese Bernard was quoted in a print feature for Out magazine about lesbian media. Bernard said that selling ads and sponsorships was always difficult, even though the website receives one million unique views each month, making it the most popular media outlet in the U.S. focused on queer women.

According to Bernard, the problem was based both in staffing (“most ad salespeople are men,” she said) and in perception—the idea that queer women do not fit neatly into existing marketing targets. At the time, Bernard said she had just as much trouble selling ad space for tampons and shampoo as for LGBTQ-specific campaigns. When it comes to marketers, she said, lesbians don’t seem to be either “gay” or “women.”

In another interview for that same Out story, staff at one of the other top lesbian-oriented media outlets echoed those complaints. While AfterEllen averaged 1.25 million readers a month, it struggled to turn those numbers into profits. Former AfterEllen editor Dana Piccoli recalled the impossible nature of ad sales there. “I was in a meeting with a marketing group that was run by gay men. And they told me flat to my face that lesbians were not a market that they felt was a viable investment,” Piccoli told Out. “And at that point, I knew we were in an uphill battle.”

How do you make brands consider queer women a viable consumer market? Start with the ones working at the brand itself. For P&G, sponsoring Lesbian Visibility Week is a no-brainer, at least partially because the company’s chief diversity and inclusion officer, Shelly McNamara, is among the 100 women featured in the campaign.

“I am fortunate to be part of an organization that values diversity and believes inclusion changes the game,” said McNamara. “Throughout my career at P&G, I have been encouraged to be my authentic self. I am honored to be able to lend my voice and experience to inspire others on their journeys.”

Having queer women in executive roles can influence how a brand intersects with the community, but so can the participation in employee resource groups (ERG). Shute said that while gay men have traditionally dominated queer ERGs, that’s changing.

“There’s quite a big thing at the U.K. at the moment about making sure those internal networks have women in them,” Shute said. “People feel that a lot of the LGBTQ content is made by men for men.”

The U.K.’s biggest pub chain, Greene King, came to sponsor Lesbian Visibility Week through its own LGBTQ network, The Village Greene, which not only interacts on the brand level with gay bars across the country but sometimes advocates for them politically too. Karen Bosher, executive sponsor of the Village Greene and a managing director at the company, had originally planned to host some of the week’s activations before everything moved online due to Covid-19.

“While I’m disappointed that we can’t put on celebration events in our pubs this week, our commitment to this campaign is not a one-off,” said Bosher. “We will continue to back the campaign with input from Diva on how best to use our pubs to support the community.”

How do you market to an invisible community? Research that separates lesbian, bisexual, pansexual and queer women is hard to come by. That’s why Diva partnered with Kantar on one of the largest-ever surveys of queer women, and released the results Monday. Perhaps the most shocking response to the study found over half of queer women said they were not out of the closet at work. 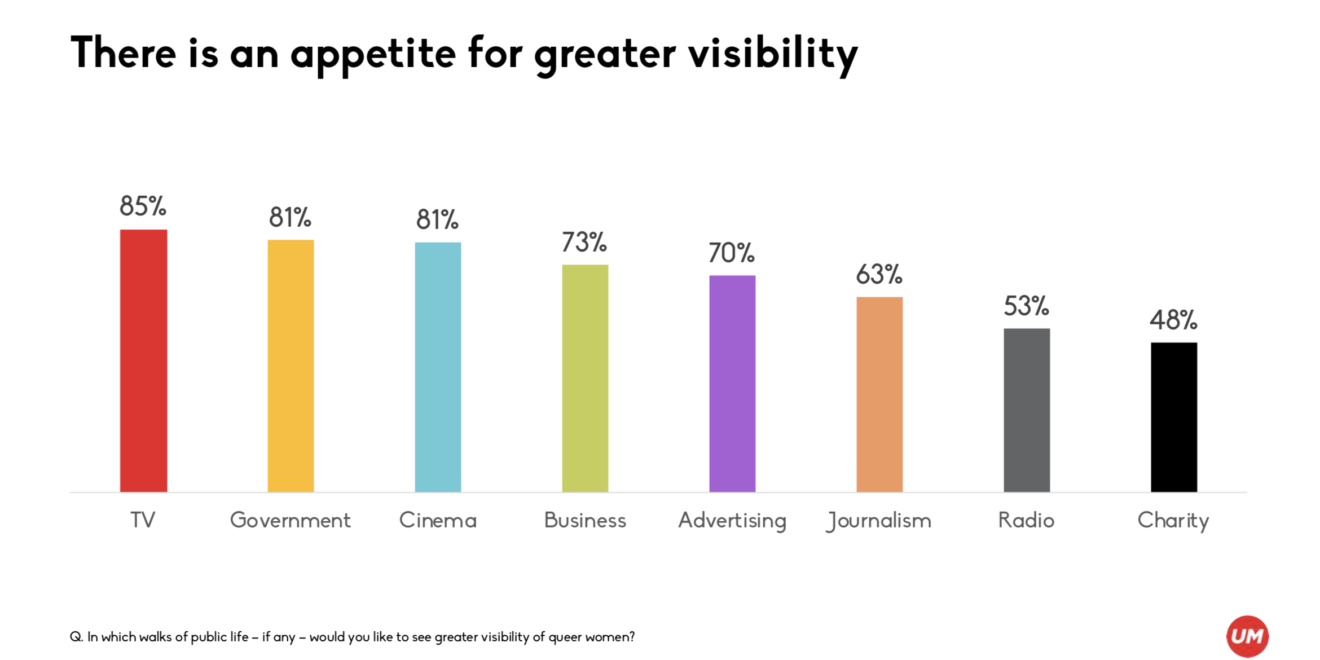 The Invisible Women/UM
@MaryEmilyOHara maryemily.ohara@adweek.com Mary Emily O'Hara is a diversity and inclusion reporter. They specialize in covering LGBTQ+ issues and other underrepresented communities.