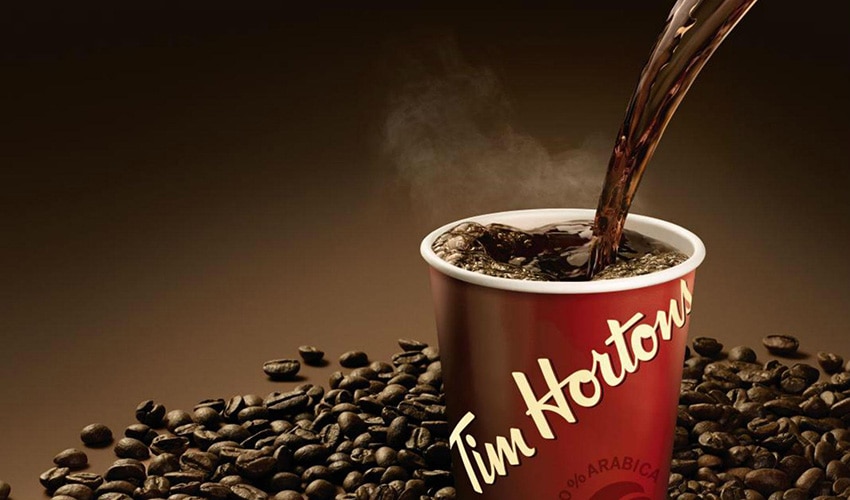 About a decade ago, Tim Hortons put up a page on its website that let customers share stories about what the restaurant meant to them personally. Just in case that concept sounds a little strange—people expressing their affection for a doughnut chain—well, then, you don’t know Tim Hortons, and you’re certainly not Canadian. For 55 years and counting, Tim Hortons has joined maple syrup, Molson, ketchup chips and hockey on the list of things quintessentially Canadian.

“Tim Hortons is a brand that historically has been seen by many Canadians as the fabric of Canada,” said Toronto-based retail analyst Bruce Winder. It is, he added, “the equivalent of Mom and apple pie in the U.S.” 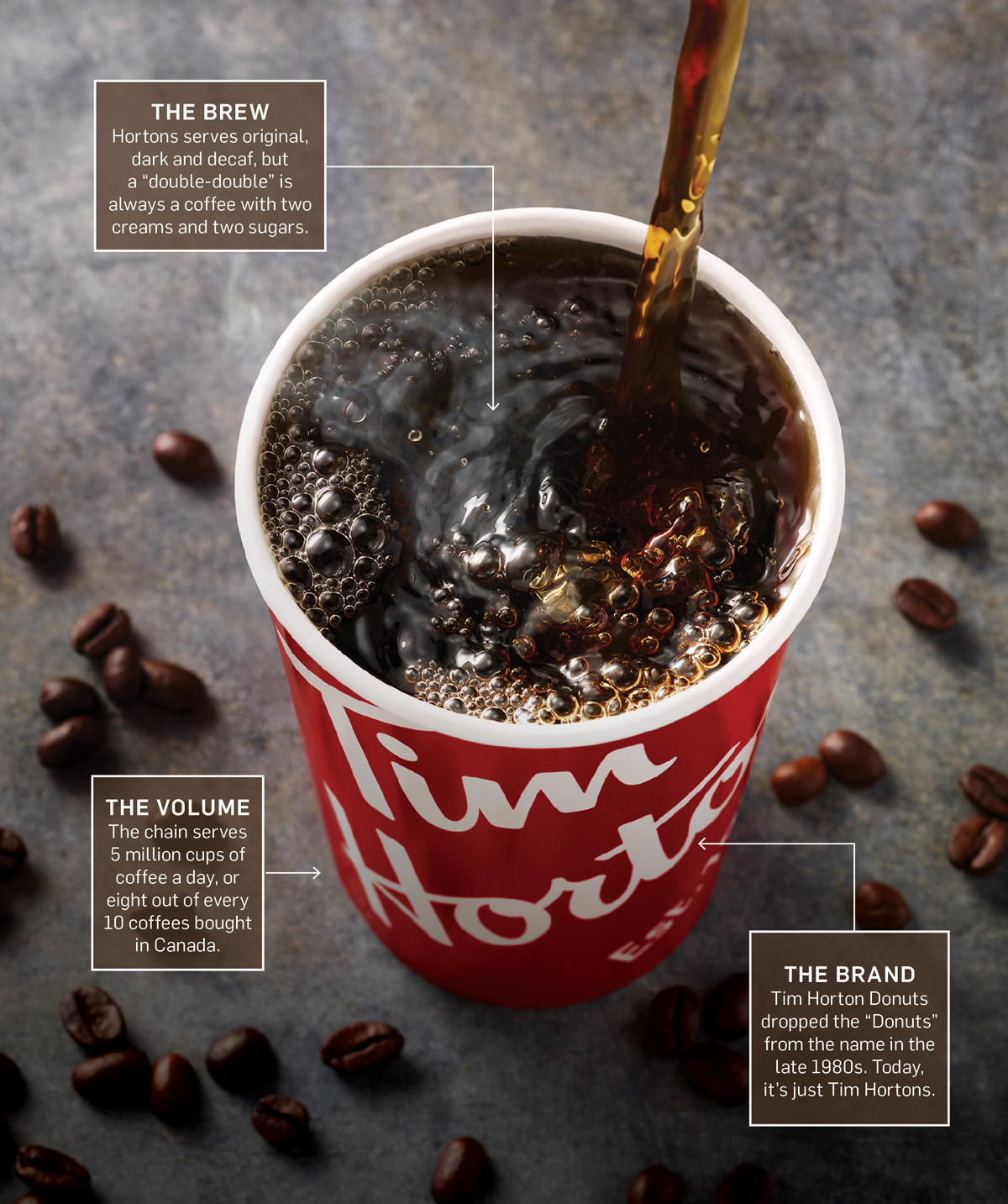 Which explains why the “Tim’s True Stories” page has racked up some 18,000 entries to date, including the bride who interrupted her wedding to run into a Tim Hortons—or Timmies, a shorthand that applies to both the chain and its coffee. There was a guy who left his Timmies unattended and the dog drank it, and the couple who left their Timmies unattended and a seagull drank them. One customer described how her father, undergoing chemo, had lost his appetite for most everything except Timmies. Another related that, though he suffers from complex PTSD, he always feels comfortable at his local Tim Hortons. 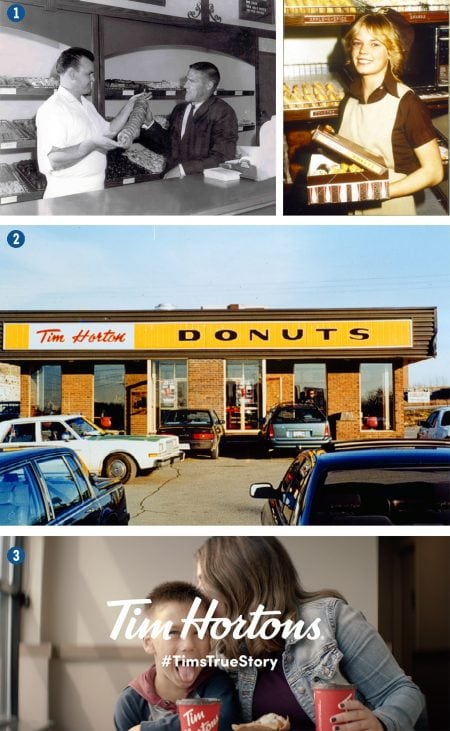 Ron Joyce and Tim Horton opened the first doughnut shop in 1964 (1), and by the time this happy employee was boxing doughnuts (2), the chain was approaching 100 locations. Restaurants went by the name of Tim Horton Donuts (3) until the late 1980s. Selected “Tim’s True Stories” submitted to the website have been made into TV spots, such as Megan Raichel and her son Conor, who used his birthday money to pay a stranger’s tab at his local Tim Hortons.
Courtesy of Tim Hortons
“It’s hard to explain the love affair that Canadians have with Tim Hortons,” said Paloma Azulay, the chain’s global head of creative excellence.

Fortunately, it’s easier to explain the brand itself. It all started half a century ago with Toronto Maple Leafs defenseman Miles Gilbert Horton, better known as Tim. Handsome and multitalented, Horton distinguished himself both on the ice (helping the Leafs win four Stanley Cups between 1962 and 1967) and in business. In 1964, he opened a tiny restaurant in Hamilton, Ontario, about 37 miles southwest of Toronto. For his steel-town customers, Horton kept the menu simple: coffee and doughnuts.

The company expanded steadily and had grown to 40 locations in 1974. That same year, Horton fatally crashed his sports car in St. Catharines at age 44. Business partner Ron Joyce, who quit his job as a cop to become Hortons’ first franchisee, took the helm. It was Joyce who slowly expanded the Tim Hortons menu, rolling out doughnut holes called “Timbits” in 1976 and lunch items like chili by the mid-1980s—though he made sure the doughnuts that Horton himself served (the apple fritter and the Dutchie) stayed on the menu, along with “always fresh” coffee.

Despite Wendy’s buying the brand in 1995, Canadians’ loyalty was unshaken—at least until 2014, when private-equity colossus 3G Capital bought the brand. Known for its ruthless cost-cutting, 3G ran afoul of Hortons’ franchisee community by downgrading benefits to offset a minimum-wage increase, among other reported upsets. “Suddenly, Tim’s started to look like a big bad corporate giant behaving badly,” Winder said, “and Canadians started to see it that way.” 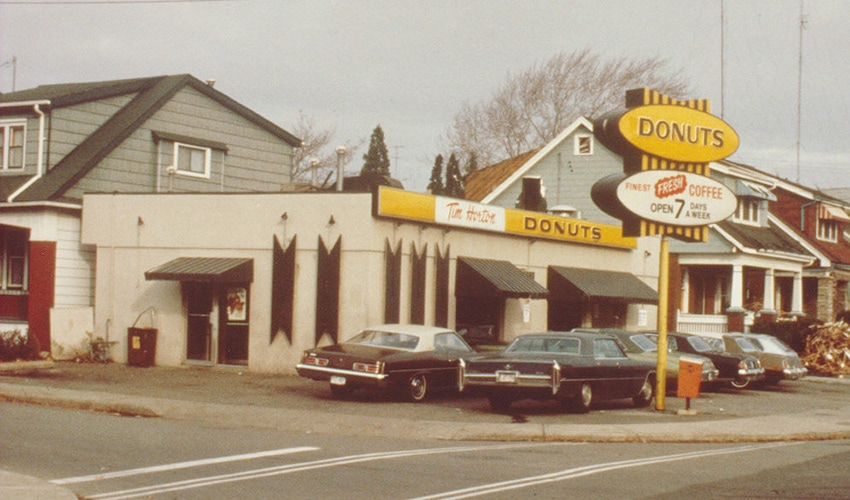 The Tim Hortons system has over 4,800 locations today, but the one that devotees care most about is the first—still serving doughnuts and coffee at 65 Ottawa Street North in Hamilton, Ontario. The building looks nothing like the original (corporate gave it a makeover four years ago), but it serves up all the favorites, plus a side order of nostalgia. The second floor is now a museum filled with old uniforms, ads and premiums—plus an original serving counter (think: red Formica). As one American fan noted, the restaurant is only 45 minutes north of the U.S. border, and it’s a good bet more than a few have made the drive.
Courtesy of Tim Hortons
Indeed they did. In research firm Leger’s 2018 Corporate Reputation Study, the chain plummeted from fourth to 50th place.

Using some feel-good marketing and more transparent management, the company has been trying to repair that relationship ever since. Franchisees “have a lot more trust in what we’re doing,” Azulay said. “Definitely, we’re on the right track now.”

Time will tell, of course. Tim Hortons still has legions of fans, but these days, “Canadians see Tim Hortons like an uncle you’ve always loved, but he’s going through a midlife crisis and acting really weird,” Winder said, “and you’re hoping he comes out of it.” 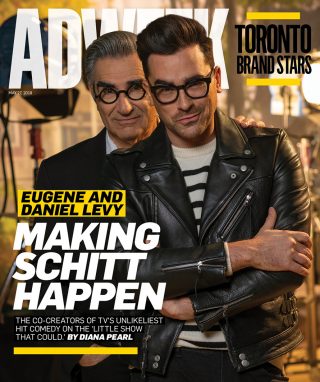 Click for more from this issue
This story first appeared in the May 27, 2019, issue of Adweek magazine. Click here to subscribe.
@UpperEastRob robert.klara@adweek.com Robert Klara is a senior editor, brands at Adweek, where he specializes in covering the evolution and impact of brands.