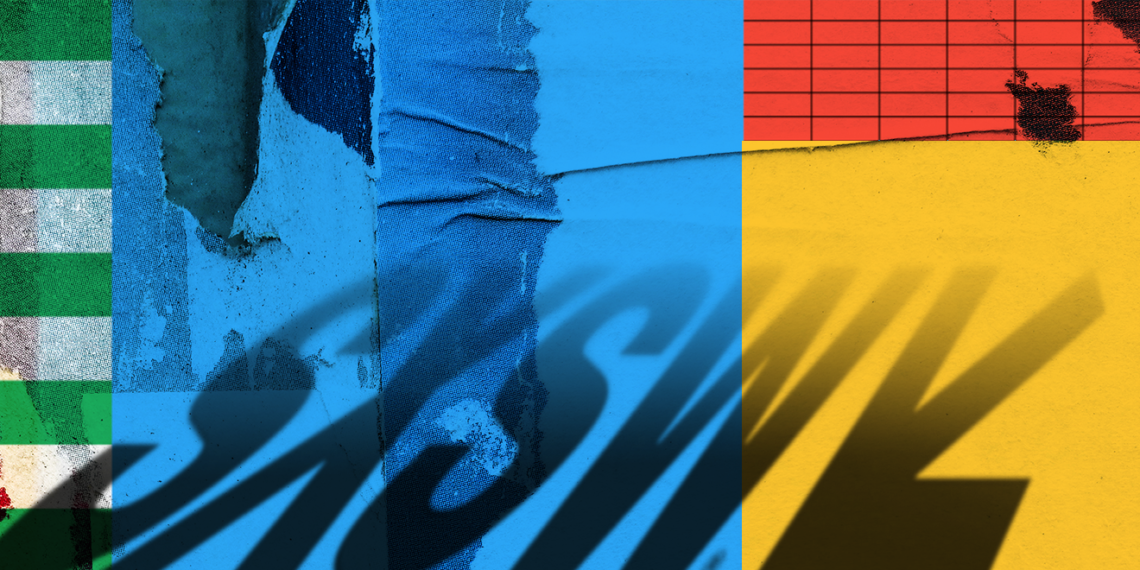 Today, Austin would have kicked off South by Southwest. Instead, the city is scrambling.

Austin, the self-proclaimed “live music capital of the world,” is a booming tech city whose economy has come to rely on the visitors and revenue from the annual event. Last year, SXSW’s conglomeration of festivals brought an estimated $356 million to the city.

This year, for the first time in 34 years, it’s not happening. 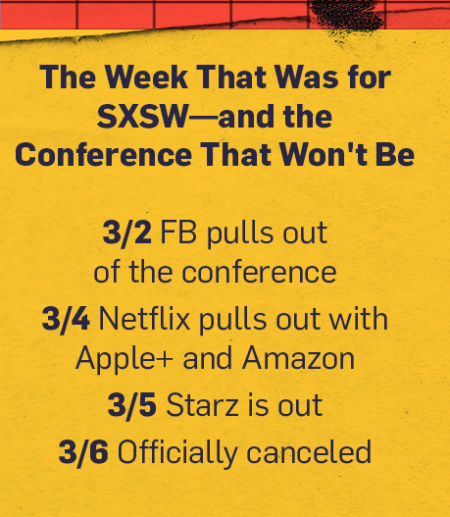 As big-name sponsors dropped out, a snowball effect gained momentum. One Friday ago, Austin Mayor Steve Adler declared a local state of disaster in the city in response to COVID-19, effectively canceling what would have been two weeks of simultaneous music, comedy and film festivals with more than a dozen conference tracks and some of the ad industry’s most talked-about brand activations alongside marketing leaders.

Those people, more than 400,000 who normally make the trek, would no longer make it. In what the organization called a “heartbreaking” move, SXSW laid off around 50 people—a third of its full-time staff. A few days later, the city banned gatherings of more than 2,500 people through May 1.

Most larger brands are staying quiet about the loss and potential future of what would have been their SXSW activations, opting to wait until things stabilize to make a decision about trying to recoup a portion of preparation costs. On ground zero, the cancellation is pushing the generally laid-back hustlers to the brink. In the fallout after Adler’s announcement, bars and restaurants started to worry whether they’ll be able to make rent in a quickly gentrifying area. Venues have frantically rebooked scores of shows. But they’re hanging on to hope—and pivoting.

SXSW EDU, the education-focused part of the festival, was slated to begin this past Monday—72 hours after the event was officially canned. But with dozens of would-be attendees already in town or on their way, an “unconference” was born, organized through a Slack channel.

Educators and researchers continued to meet earlier this week to share ideas and expertise. Several of the informal sessions were shared online so that registrants who didn’t make it to town could still participate, and those who came anyway met for smaller, in-person networking events.

A virtual alternative like what SXSW EDU attendees created for themselves is looking more and more like something that brands, agencies and companies may have to prioritize for the foreseeable future. While there are still a lot of unknowns regarding COVID-19, it doesn’t look like planning for in-person events is on the books.

‘We’ll have to tighten our belt’

For many bars and restaurants in Austin, that two-week bump in revenue makes up for the dry summer season, when college kids and a good chunk of staff from the University of Texas leave town and everyone else does their best to stay out of the sweltering heat. For Austin Beerworks, SXSW (known by some as South by) makes up the brewery’s biggest chunk of revenue for the year.

“It’s gonna be pretty devastating not to have South by,” said Austin Beerworks co-founder and brewing director Will Golden. “It’ll hurt. We’ll have to tighten our belt.”

"It’ll hurt. We’ll have to tighten our belt."
Will Golden, co-founder and brewing director, Austin Beerworks

For a brewery that’s become a local staple since it was founded nearly a decade ago, this setback won’t be entirely catastrophic. (It’s not the kind of business that relies on SXSW to make rent). Music venues and bars, however, have higher stakes. Austin’s Red River Cultural District is “the largest contiguous corridor of live music venues in Texas,” according to the executive director of the district’s merchant association, Cody Cowan.

“We kind of consider ourselves like the keystone of South by Southwest,” Cowan said. “It’s going to be rough. … We don’t know where they’re going to be at wrap of March.”

While venues are the center of operations for the music portion of SXSW, they’re also where a lot of brands host parties and activations throughout the festival. With the cancellation, venues saw 10 days of programming—that can account for as much as 50% of their annual revenue—disappear in an instant.

Putting on a solution hat

In a matter of days, venue owners have had to react and rebook that entire timeframe—contacting all the musicians who had planned to come to find out whether they were still touring and filling in those holes with local acts, when and where necessary. Mohawk, one of the venues along Red River, had been partnering with SXSW for over a decade. 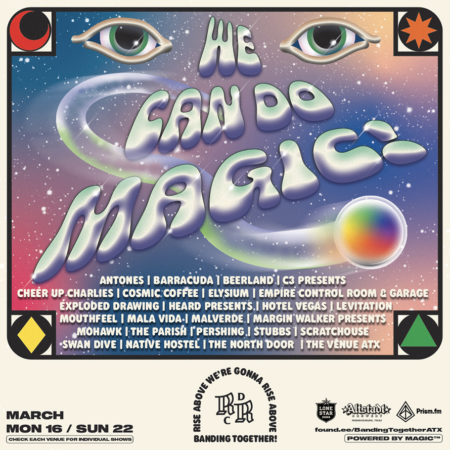 More than a dozen bars, restaurants and event companies are taking part in the event.
Ian Orth

That shift comes with some hard branding questions, noted Moody, who also runs a local creative agency called Guerilla Suit that does work for Mohawk and the Red River Cultural District. After the cancellation, Cowan and Moody worked with dozens of venues and production companies to create a strategy for an alternative SXSW. Moody said the team’s first task was the ensure that its response was sensitive and respectful to the situation, while clearly communicating the steps being taken to create safe spaces at the venues. That included increasing the frequency of cleanings, providing several stations for hand sanitizer around the venues and increasing communication on site and online about how to stay safe.

But once that message was disseminated, they still faced the issue of consumer confidence. Moody added it felt like Austin really needed something to rally around after the blow of losing South by.

And so, inspired by the impossibility of their predicament, America’s 1982 hit “You Can Do Magic,” and superstar of illusion Doug Henning, they landed on a theme and tagline for the South by alternative: We Can Do Magic.

“We’re going into this freaky weird 70s rock-and-roll magician place where, working with magic, anything is possible,” said Moody. “By the way, if we pull this off, it’ll be like magic.”

With sparkly gifs, art featuring magicians in bodysuits, crystal balls with Purell inside and 70s-era rock and roll, the coalition began promoting its alt-SXSW lineup on Wednesday.

For Austin-based brands, SXSW is usually an opportunity to show off their wares to attendees from around the world. Made In, an Austin DTC startup specializing in high quality cookware, had planned a 300-head paella dinner come Monday. The event featured two award-winning chefs and several local partners.

Rather than cancel the event outright, Made In decided to postpone it after too many attendees canceled their travel plans. Made In wanted to ensure that it was able to support its local partners as much as possible in the face of SXSW’s cancellation, telling partners to keep a portion of the deposits as “credits” toward a future event or potential makeup dinner in a few months, which co-founder Jake Kalick says he hopes will be pretty close to what they’d planned to throw during SXSW.

“There’s infrastructure in place in Austin that was pretty reliant on South by,” said Kalick. “For us, we can feel and see the reverberations.”

Nine Banded Whiskey, one of Made In’s beverage partners, would have benefited from exposure and in-person tasting of the product. Instead of creating brand evangelists out of visitors from around the country, this year has shifted to more of “an opportunity to build up our community and show that we support each other,” explained Nine Banded founder and CEO Sean Foley.

There’s lots of rallying and do-good happening: The Austin Community Foundation, the Red River Cultural District and the Houston-based Southern Smoke Foundation have all set up funds to support service industry workers and musicians who’ve been thrown into dire financial situations by the loss of their SXSW income. #TipDouble is also circulating on social media as a way to support bartenders and servers who were counting on their annual South by bonus. In addition, a website called ILostMyGig.com was created immediately after the festival’s cancellation, and is posting the jobs that people have reported they’re missing out on. As of March 10, the total amount of lost income was over $2 million.

As for filmmakers who were planning to use SXSW as the world premiere, reorganizing their release schedules are complicated. With only a few big festivals to gain momentum for new films, especially for debut or early career filmmakers, the loss in travel funds, scheduling and exposure will be hard to take, said Austin Film Society’s head of film and creative media Holly Herrick.

“It’s not just rebooking, but having to rethink the whole strategy around the film’s release,” she said.

Part of Austin Film Society’s mission is to support local filmmakers, so it already has a fund set up that it hopes to use to help folks get back on their feet after this setback, said Herrick.

A South by for the locals

Despite the fear of uncertainty, there’s also a hope that the change provides an opportunity for more locals to experience the festival that crops up in its place, just like in the old days.

"This is the way South by used to be for us, in the late 90's."
Chad Dolezal, co-owner, Troublemaker

“This is the way South by used to be for us, in the late 90’s,” said Chad Dolezal, co-owner of a new bar and record shop called Troublemaker. “We want to show what Austin can do with both arms tied behind our backs.”

While the news regarding the new coronavirus changes hourly, Austin still didn’t have any confirmed cases at press time. Austinites will certainly carry—and party—on.