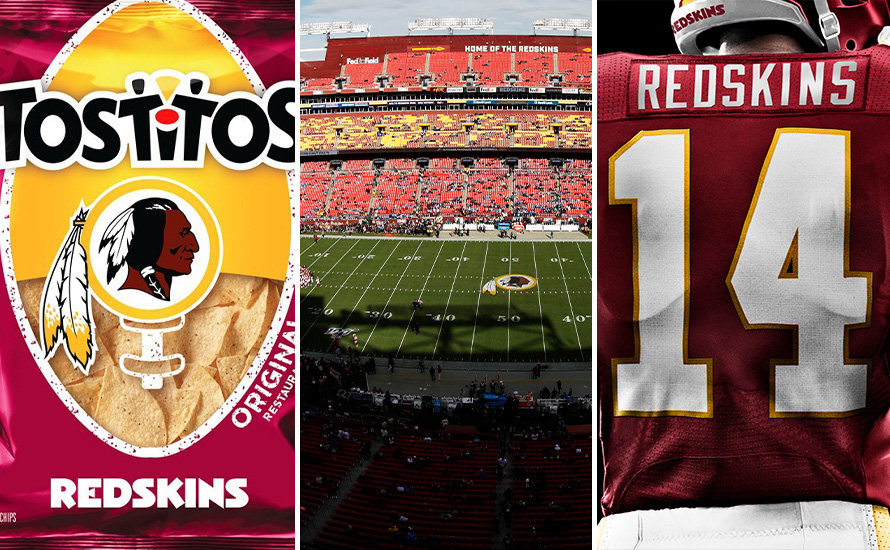 Investment firms that put pressure on the Dakota Access Pipeline are now setting their sights on the Washington Redskins. - Credit by Courtesy of PepsiCo; Getty Images; Courtesy of Nike

On Friday, three separate letters signed by 87 investment firms and shareholders worth a collective $620 billion asked Nike, FedEx and PepsiCo to terminate their business relationships with the NFL’s Washington Redskins unless the team agrees to change its controversial name.

“We have communicated to the team in Washington our request that they change the team name.“

The move may raise eyebrows in that FedEx chairman, president and CEO Fred Smith is part owner of the team. Additionally, the stadium in Landover, Maryland is named after the global logistics company.

Native American leaders have pushed for the Washington, D.C., NFL team to change its name (a racist slur that stems from bounties paid to white settlers in exchange for the skins of Native American adults and children as proof of their murders) for decades, including through two high-profile lawsuits. But the team has dug in its heels, with owner Dan Snyder saying in 2013 he would “never change the name.”

After the reckoning brought by June’s global protests against racism and police killings of Black Americans, Native American leaders—and advocates who want to see the NFL team change its name—are acting with renewed urgency, hoping to strike while the iron is hot. The investor letter to PepsiCo, for example, cites the company’s “decision to sunset the Aunt Jemima brand is an important and meaningful step,” and calls on it to continue that commitment to divesting from racist mascots by ending its relationship with the Redskins.

Carla Fredericks, director of First Peoples Worldwide and director of the University of Colorado Law School’s American Indian Law Clinic, told Adweek that although the battle for the name of the Washington team has gone on for decades, something is different this time.

“This is a broader movement now that’s happening that Indigenous peoples are part of,” said Fredericks. “Indigenous peoples were sort of left out of the civil rights movement in the late 1960s in many respects, because our conditions were so dire on reservations and our ability to engage publicly was very limited because of that. With social media now, obviously everything is very different.”

Fredericks was part of a similar effort to get investors to divest from the Dakota Access Pipeline. She said as a result of pressure from both the public and from investors, firms with ownership stakes in the pipeline lost an estimated $7.5 billion and DAPL parent company Energy Transfer Partners saw its stock go down by 20%. In 2017, Wells Fargo alone lost billions when two cities pulled accounts from the bank over its investment in the pipeline.

“I’m very encouraged by the rising awareness of how every dollar you spend is a vote you cast on your values. And that applies to money you have in investments as well as any brands you support,” said Fredericks.

She added that because FedEx, Nike and PepsiCo are Fortune 500 companies, “anyone that has a simple stock portfolio with an index fund owns a share of these companies.”

Institutional investors are especially concerned, said Fredericks, about the brands’ actions “that run counter to their stated commitments on diversity and inclusion” and how not abiding by those commitments violates basic corporate governance and raises questions about whether the brands are trustworthy. Each of the individual letters quotes the brands’ own very recent pledges to commit to the fight against systemic racism and to increase efforts toward diversity and inclusion.

“We appreciate that Nike has spoken up in support of the protests stating ‘Systemic racism and the events that have unfolded across America over the past few weeks serve as an urgent reminder of the continued change needed in our society. The Nike, Inc. family can always do more but will never stop striving to role model how a diverse company acts,'” reads the letter to the athletic brand.

The Nike letter also commends the brand for working with Colin Kaepernick, the player who was blacklisted from the NFL after starting the “take a knee” field protests against police brutality in response to the police shooting of 18-year-old Michael Brown. The letter does not mention Nike’s N7 line, a collaboration with a Diné designer, or the N7 Fund through which Nike has donated over $8 million to Indigenous communities and organizations. Between the brand’s risky early work with Kaepernick and its N7 project, it would seem that Nike has firmly drawn the line on racism and where it stands.

“However, Nike continues to provide uniforms and equipment to the Washington D.C. NFL football team which bears the logo and name,” the letter continues. “Further, it produces and sells thousands of jerseys and other apparel with the team’s racist name and logo. This association with and facilitation of the racism inherent in the name and logo runs contrary to the very sentiments expressed by the company.”

“There is absolutely no place for racism or unequal treatment anywhere, and we must unequivocally speak out and reject it when we see it,” said FedEx in a June 1 statement. According to the letter sent by investors, the brand’s continued sponsorship of the Washington team amounts to “association with and facilitation of the racism inherent in the name and logo,” which it says “runs contrary to the very sentiments expressed by the company.”

In response to a request for comment, FedEx told Adweek, “We direct any questions about the name of the NFL team in Washington to the franchise owner.” Adweek has sent requests for comment to the NFL and to the Washington Redskins for several weeks without response.

Nike and PepsiCo did not respond to multiple requests for comment.

“When companies don’t pay attention to social pressure, there’s a material risk,” said Fredericks. “You might remember what happened to Coca-Cola during the anti-apartheid boycotts, because Coke had such a big presence in South Africa. This is another moment where we’re asking companies to divest from racism. But right now the racism isn’t in South Africa, it’s here in the United States.”