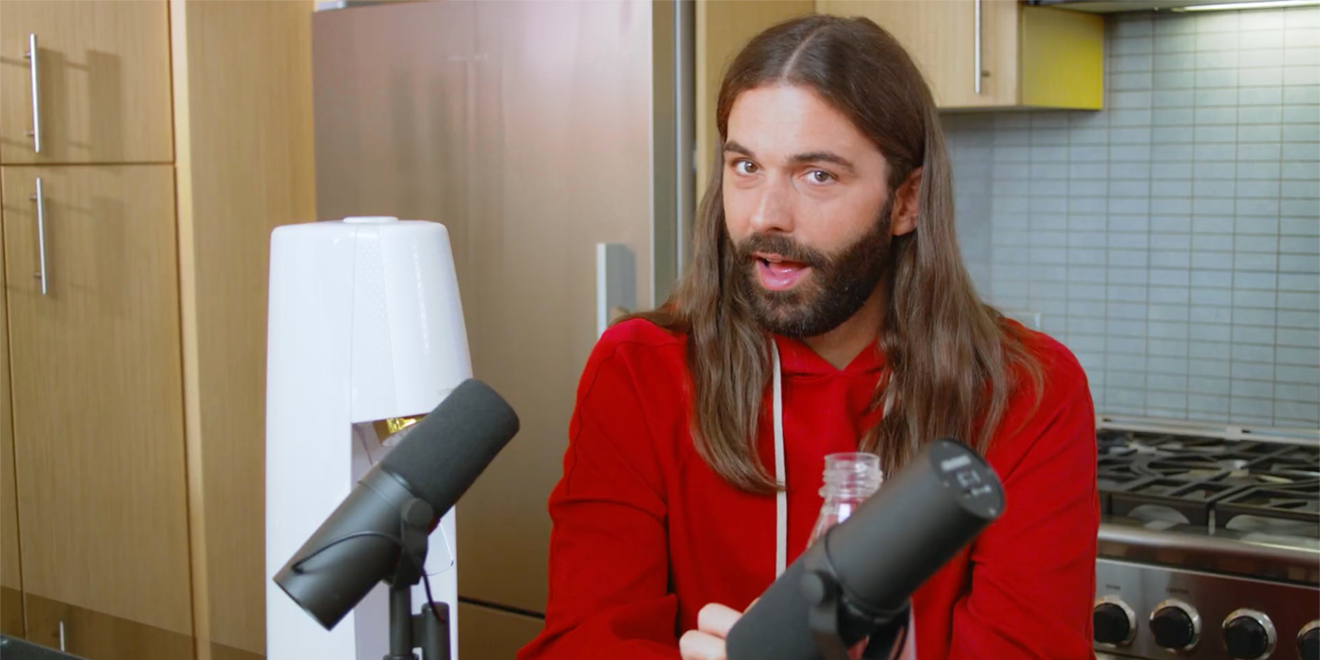 JVN getting fizzy with it. - Credit by SodaStream

Jonathan Van Ness is known for making you feel all the feels, but can he make you feel tingly?

SodaStream recruited the Queer Eye star to parody ASMR videos in its latest holiday ad. JVN joins the trend of celebrities and YouTubers whispering into microphones, clinking, tapping and crunching his way through the two-minute spot.

Traditional ASMR (autonomous sensory meridian response) videos, which rose to popularity in 2016, are made to help viewers relax by speaking at low volumes, tapping on objects or role-playing to trigger a physical response. For example, there’s a YouTube video of a hairdryer being blown for two hours. While Van Ness has spent plenty of time in salons, SodaStream placed him inside a kitchen to give viewers tips on how to de-stress during the holiday season, with the help of a carbonating machine.

“I know the holidays can be so stressful, so I wanted to show you some of the sounds that make me feel very, very, very, very relaxed, so relaxed. So. Relaxed,” he said, ping-ponging between two microphones.

With a SodaStream device next to him, he decides to get “fizz-ical” and carbonate some water. But he doesn’t stop with bubbles. Van Ness quietly chews on cucumbers, which he deems the most relaxing vegetable in all the world. Then comes tapping the tune of “Jingle Bells” on a glass, grating a lemon and, of course, enjoying a cup of freshly brewed soda water.

Oh, and back to the hair. He doesn’t miss an opportunity to show off those luscious locks. Shockingly, when Van Ness drapes his hair over the mic, it doesn’t make a sound. “That’s my hair in the ASMR mic,” he whispered. “We’ve peaked.”

ASMR videos and their use in advertising may have also already peaked, so the tactic does feel a little late to the game. Michelob Ultra employed Zoë Kravitz to drop her best ASMR skills for their Super Bowl ad in February. Reese’s Canada partnered with five “ASMRtists” to create a feature-length film showcasing the methodical biting approach to consuming the treat. And Behr’s, Applebee’s, Zippo and Ikea also threw their brands into the relaxing ring with ASMR-inspired ads.

Despite a somewhat crowded field, the spot still manages to sizzle and shine, thanks to the brand that Van Ness has built for himself over the past two years. As a member of the Fab Five, he’s no stranger to partnership deals. His playful and caring approach makes consumers feel like he genuinely enjoys the products and isn’t merely cashing in on another “hashtag ad” opportunity.

SodaStream, which was recently bought by PepsiCo for $3.2 billion, continues its partnership with high-profile figures this holiday season. Van Ness joins the crew of Mayim Bialik, Paris Hilton, Scarlett Johansson and Kristian Nairn, who have all brought the laughs in SodaStream spots.