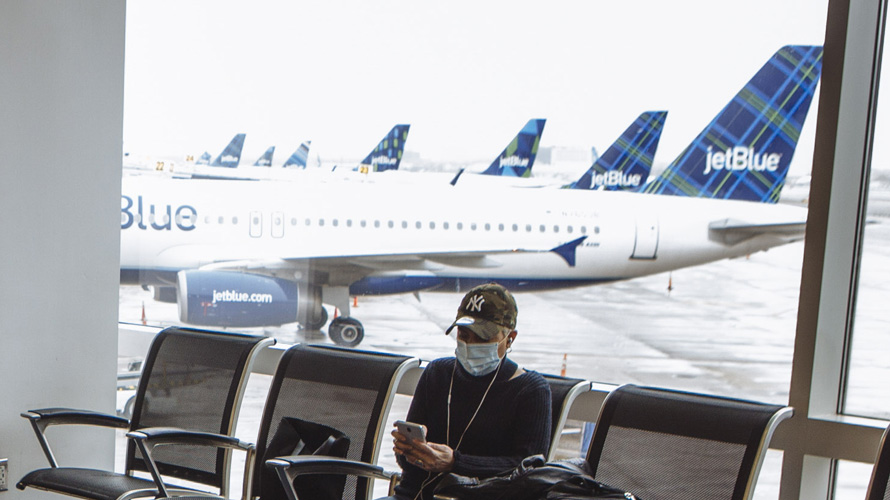 The mask mandate begins May 4 for all JetBlue flights. - Credit by Getty Images

Even though practically no one is flying, starting May 4 all passengers aboard any JetBlue flight will be required to wear a face covering.

The airline made the announcement Monday evening, taking so far the biggest step so far by any airline toward ensuring customer safety during the Covid-19 outbreak. There was no timeline for when the requirement would end.

“Wearing a face covering isn’t about protecting yourself, it’s about protecting those around you,” said Joanna Geraghty, JetBlue’s president and chief operating officer, in a statement. “This is the new flying etiquette.”

JetBlue passengers will be required to wear their face coverings during check-in and boarding in addition to the flight. The airline’s policy was modeled on the Centers for Disease Control and Prevention’s guidelines to help slow the spread of Covid-19.

No other major U.S. airline has yet to make a similar announcement, but most have begun requiring their crew to wear face coverings.

American Airlines will also begin offering face coverings to customers, but as of now is not requiring passengers to wear them. Delta Airlines has also blocked the middle seat on its flights, giving passengers the space to practice social distancing in the air. JetBlue also said that it would be limiting the number of seats available aboard its flights to allow passengers space.

Finding ways to guarantee customer safety is paramount, as air travel has fallen roughly 95% since the outbreak began. JetBlue is not exempt: The airline said it’s flying fewer than 150 flights a day, and each one is only 10% full.

As such, the industry has been decimated. The U.S. Travel Association estimated that the travel industry could lose $519 billion in domestic travel spend, with airlines account for $314 billion of that drop, according to the International Air Transportation Association.

As part of the multitrillion-dollar stimulus package passed by the federal government earlier this month, airlines received an earmarked $50 billion. JetBlue in particular is the recipient of grants totaling about $685 million, as well as a $250.7 million loan.