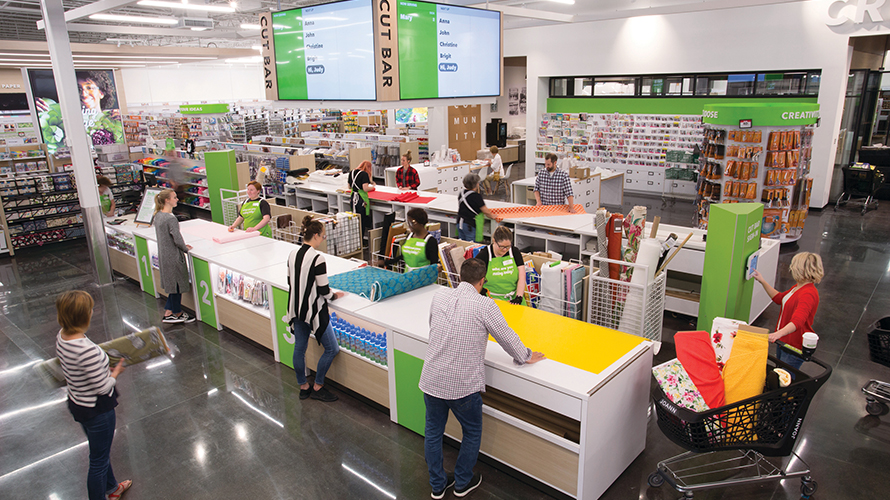 Small-business owners make up about 20 percent of Joann’s customer base. - Credit by Joann

On Tuesday, Joann customers received an email—not to share new offerings on the craft and fabric store’s website or to alert them to an end-of-summer sale.

It was a call to action regarding President Trump’s pending tariffs on goods imported from China—which has been dubbed the “Made in America” tax. In the email, Jill Soltau, Joann’s president and CEO, issued a plea to customers to support the store’s fight against the tariffs.

Joann, which recently rebranded from Jo-Ann Fabrics, takes issue with the tariffs not just on its own behalf, but on behalf of its customers. Many small-business owners purchase the materials they use to make their products at Joann. Soltau’s argument is that by making it more difficult for Joann to provide such materials to customers, the tariffs will inadvertently hurt American small-business owners by driving up prices and taking away availability.

“I’m writing to you today to let you know that your ability to continue creating at an affordable cost is in jeopardy,” Soltau wrote in the email. “Proposed tariffs on many of the items we sell will inadvertently place a tax on the ‘Made in America’ products you make, which will hurt millions of individual crafters along with charitable organizations and small businesses.”

Small-business owners make up about 20 percent of Joann’s customer base, and Amanda Hayes, a spokesperson for Joann, told Adweek that “increased costs would be passed directly to them.”

“We have a ton of customers who are on limited budgets because they’re working for a nonprofit or making items to donate on their own accord, so they don’t have a whole lot of extra money to spend,” Hayes said. “This is impacting them and the people who are benefiting from those charities. There’s all of the different layers of people who would be impacted negatively.”

Soltau’s email continued: “Together, we can make a difference by encouraging Washington, D.C., to stop these tariffs before they take effect. Today, we, as a company, joined a campaign to support makers across America in speaking out.”

The email included a link to a petition, where people can sign to show their support for abandoning the tariffs. Hayes said that the idea behind sending out the message was all about awareness: “We wanted to make sure that our customers who are making in America are aware of the increase in raw material cost that would result if these codes are left in place.”

On Thursday, Soltau testified before the Office of the United States Trade Representative requesting an exemption from the tariffs.

Hayes said about two-thirds of Joann’s fabric and yarn products are imported from China, and she added that it’s one of the few places in the world that has the factories to “manufacture the quantity and the quality of product that we require.”

“We have very limited options in terms of where else we would be able to source from,” she said.

There are always risks involved when brands speak out on issues that are considered political, but Hayes said Joann doesn’t view this as politics and that it isn’t taking a partisan stance. She added that Joann views the harm to customers as “unintended consequences” of the tariffs.

“We evaluated and said this is something that our customers need to know about, and we hope that they’ll help us and join the cause to make the administration aware of this unintended consequence,” she said.

She also said the reaction from customers has been “overwhelmingly positive,” with over 60,000 people signing the petition or writing to their representatives over the past few days.

“That just reinforces why we did this,” Hayes said. “These are people who are small-business owners or individual entrepreneurs, making clothing, blankets or home decor, and they have really appreciated that we’re standing up and helping to lead the charge.”