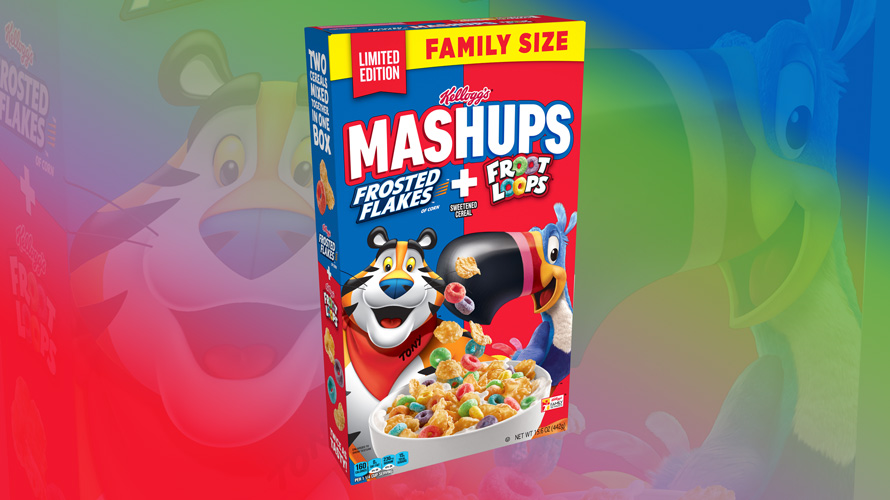 Nearly half of cereal eaters already mix different cereal brands together, according to Kellogg's. - Credit by Kellogg's

Under a new, limited-edition line of cereal called Mashups, Kellogg’s is now selling Frosted Flakes and Froot Loops in a single box.

Nearly half of cereal eaters already mix different cereal brands in their bowl, according to survey data from Kellogg’s K-Insiders Consumer Panel—so the company decided to make a product that does it for them.

“Kellogg’s is always looking to innovate and deliver new experiences that our cereal fans desire,” said Erin Storm, marketing director at Kellogg’s, in a statement.

“In the cereal category, the sugary stuff is actually what’s selling now,” John Baumgartner, an analyst at Wells Fargo, told Adweek in January. “Cereal’s one of the categories where people are splurging a bit more in terms of indulgence.”

Kellogg’s Frosted Flakes-Froot Loops product, which is available for purchase online and in stores nationwide, contains 15 grams of sugar per 1 1/4-cup serving.

Seeking ways of encouraging people to consume its products throughout the day, in May Kellogg’s debuted a new product line called Jumbo Snax, enlarged versions of Froot Loops, Apple Jacks, Corn Pops and Frosted Flakes meant for snacking outside of breakfast.

In the first quarter of 2020, Kellogg’s reported that cereal net sales in North America increased 2.7% compared to the same period last year.

During an earnings call with analysts in late April, Kellogg’s chief executive Steven Cahillane said, “Cereal is one of the food categories whose consumption has remained at very elevated levels, even after the couple of weeks of consumer stock-ups.”