Kevin Hart on Why He Favors ‘Fun’ Advertising, Including Standing in the Rain in Times Square

Comedian spoke at Brandweek about the weight his endorsements carry 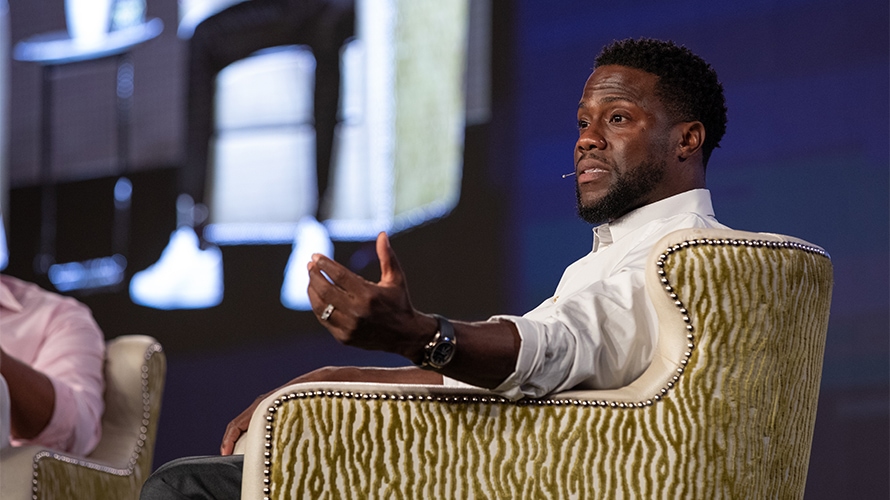 Kevin Hart isn’t afraid to get a little uncomfortable to promote his brand.

Earlier this month, in the midst of a nonstop promotional tour for his new film, Night School, which he starred in and co-wrote, he took to the typically crowded streets of Times Square, megaphone in hand, to spread the word about the movie.

The only problem? Times Square wasn’t its traditionally bustling self, as it was pouring rain, the crowds had sought shelter inside. But despite protests from his team, Hart didn’t let a little rain stop him from marketing his message: Go see Night School. He got on a double-decker bus, by himself, for two hours, and talked to everyone who would listen about the film.

“I’m in the rain, yelling at people,” Hart said during a keynote conversation at Brandweek. “There were only like three or four people on the street. I’m getting the craziest looks, yelling at a guy, ‘You don’t want my movie to work?'”

The time in the rain—and the funny looks—paid off: “It ended up being the funniest piece of content, because it was different,” he said. “There’s ways to make marketing and promotion fun.”

Though Hart’s marketing efforts don’t always take him out into the pouring rain, he said he’s committed to promotional work that will “show you the kind of partner I am.” Of the Times Square bus situation, he said, “The whole reason behind this whole sketch, and this whole stunt, was for me to show the hard work and energy I put into the things I believe in.”

In conversation with Adweek managing partner Danny Wright, Hart opened up about how he’s parlayed his success in comedy into a string of lucrative brand deals, both personally, and for his Laugh Out Loud network, a multi-platform network and comedy brand (and joint venture with Lionsgate) for which he serves as CEO that offers comedic programming.

A number of Laugh Out Loud network’s shows have brand partners: Cold As Balls, a talk show featuring Hart interviewing athletes in ice baths, works with Old Spice, and Lyft Legend, a show in which Hart goes undercover as a Lyft driver, partners of course with Lyft. These two are perfect examples, Hart said, of his embracing a brand.

With Lyft Legend, it’s done quite literally. He puts on the makeup and gets in the driver’s seat to deliver surprise rides. With Cold As Balls, he brings Old Spice’s athlete partners on the show, not only to speak about their careers and lives, but also about their relationship with Old Spice and the products.

“These are the things that have really popped because we have embraced brands in a unique way,” he said. “The way that I love to partner is through authenticity. So if I can find ways to make your brand pop in a relationship, then I’m just as valuable to you as you are to me.”

Hart’s authenticity carries over into his own endorsements, even if it’s in an unexpected way. For example, he’s a Nike partner, despite the fact that the vast majority of the brand’s endorsement roster is filled with athletes. “I was able to do that because I’m able to make the person who doesn’t feel like an athlete feel like an athlete,” he said. “I bring you the person on the couch who doesn’t know why they need running shoes or training sneakers. I’m giving them a different level of messaging.”

That partnership also extended into Hart’s philanthropic endeavors. As he grew as a runner himself, he was able to run races that allow him to raise money to fund college educations for those in need.

The key to the authenticity, Hart said, is to make sure that every partnership works—not just for him and the brand, but in conjunction with the other brands he’s working with, too. Sometimes, that means walking away. “I’ve turned down so much money for things that just don’t make sense,” he said.

He had to find that sweet spot when negotiating a deal with Mountain Dew. Worried that it would impact the perception of his relationship with Nike, he looked for an angle that had a natural fit in his life. “I told Mountain Dew, ‘I want to be in business with you, but we have to find a unique way for that business to exist, where I don’t affect the things that are already under my brand,'” he said.

That angle ended up being all about Hart’s busy life on the road when he’s on tour and in need of an extra jolt—in the form of Mountain Dew. “Your drink is about having a boost,” he said. “Base it around me, as a comedian, and make it about me needing a boost before I get on stage.”

According to Hart, these sorts of conversations are necessary. “This wasn’t them bringing it to me,” he said. “This was me sitting in a room with them because my brand is at stake.”

Being that invested in your own brand, he said, is the secret sauce to success. And when he’s invested, Hart said, he sees the payoff.