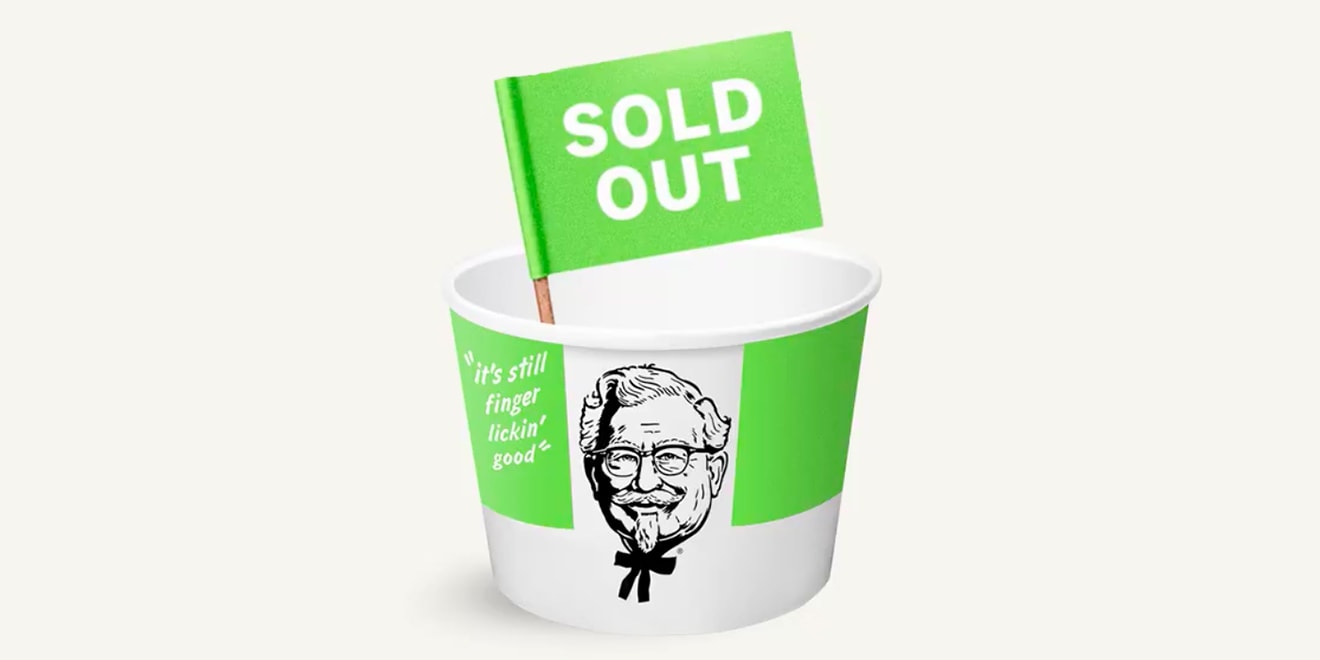 KFC's limited test run of meatless 'Beyond Fried Chicken' was only available in Atlanta. KFC

It only took a few hours on Tuesday for KFC to answer the question, “Will people buy chicken-free chicken?” Yes, yes they will.

The one franchise in the Atlanta area that launched the faux-meat Beyond Fried Chicken sold out of its supply of nuggets and boneless wings just after lunch time. Customers had started arriving before 8 a.m., with lines that stretched a few blocks. There was a “double loop” of cars around the building trying to get to the drive-through windows, according to social media posts.

Sales were so brisk that the restaurant used its entire allotment of plant-based chicken, created in partnership with Los Angeles-based Beyond Meat, meant to carry it through an experimental run.

(It seemed to be the day for selling out of buzzworthy menu items: Popeyes also announced it was sold out of its new chicken sandwich.)

KFC execs said they sold as much of the new product in those first five hours as they’d usually sell in a week of their snacky popcorn chicken. They will “evaluate these results and customer feedback to determine the best way forward, potentially a larger test and/or a national rollout,” the brand said in a statement.

There was plenty of mainstream media coverage of the announcement on Monday that KFC would be the first national fast food chain to offer the meat substitute at its location near the Sun Trust Park baseball stadium.

And the home of the Colonel went all out with bright green accents painted on the store and a giant billboard hawking the Beyond product. Local radio and TV stations picked up the story, likely driving even more curious flexitarians (or those who wanted to be part of the action) to the venue.

We told you this morning on @wsbradio about the Beyond Chicken @kfc - looks like folks are beyond ready to try it. pic.twitter.com/tXR7GHUm06

Some said it was even more of a mob scene than at chicken-sandwich-slinging Popeyes lately, while others posted shots of their successful purchases. Local resident Tony Lorino weighed in with, “All of Atlanta to their bosses today: ‘imma be late coming back from lunch.’”

Industry watchers say there’s pent-up demand for meat substitutes, and fast food restaurants are democratizing the products, offering them at affordable prices and introducing them to the masses.

At the same time, the plant-based products themselves have improved, promising a similar sensory experience to meat versus the kale, tofu or quinoa versions of the past.

So far, it’s mostly been an imitation burger war between Beyond and its top competitor, Impossible Foods, the company behind the Impossible Whopper. But the KFC deal broadens the spectrum to include other plant-based meat substitutes, which will continue to expand with more pork, poultry and seafood on the horizon.