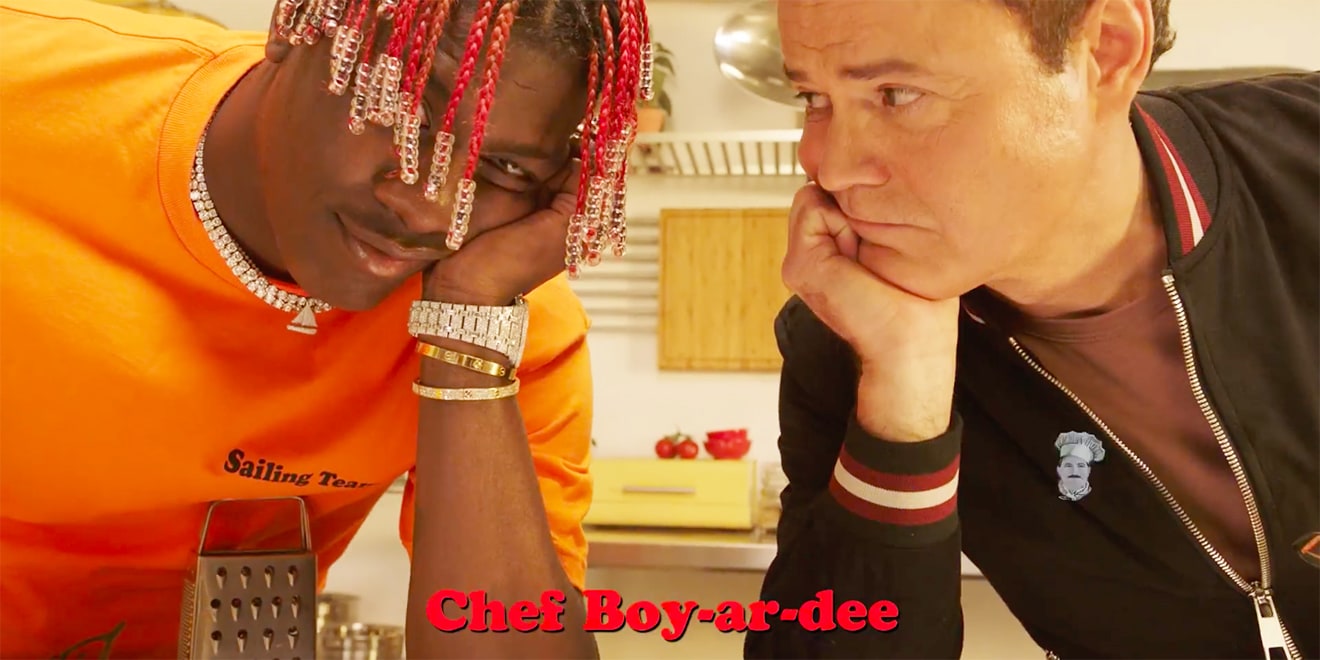 Ready to start the Par-dee? - Credit by Chef Boyardee

What do you get when you mix nostalgia for canned ravioli with a classic marketer’s burning desire to stay relevant in contemporary culture? Apparently, an original trap-inspired music video featuring 21-year-old artist Lil Yachty alongside 60-year-old performer Donny Osmond, with both singing—heavily auto-tuned—about Chef Boyardee.

“Start the Par-dee,” slathered with camp, is an ad for a new line of retro-styled “Throwback Recipe” products from the ConAgra-owned brand. In keeping with the zeitgeist, it’s relentlessly self-aware—complete with slapstick winking and a kitchen-sink pastiche of green-screened backdrops and props paying homage to myriad eras.

There’s a gold record with Chef Boyardee’s face plastered on it. There are psychedelic ravioli animations. There’s diamond-encrusted jewelry, and an old boombox. There’s scuba gear and air-guitar on an oversized fork. There’s plenty of deliberately goofy dancing. Lil Yachty even appears composited into black-and-white footage of the original, real man behind the brand, Ettore Boiardi. The rapper peers casually over the chef’s shoulder at his work on the stove, eyebrows raised.

In other words, it’s an over-the-top clown act—complete with lyrics about tomatoes and pasta and beef that strive to be earnest and ironic at the same time. The results are predictably mixed.

The artists created the video with The Annex, an entertainment focused subsidiary of agency Havas, itself owned by Vivendi—the same parent company as Yachty’s label, Capitol Music Group.

They wanted to connect with everyone from millennials to baby boomers, and offer a fresh take on the 1980s jingle “Thank Goodness for Chef Boyardee.” A manipulated audio sample—not obviously cut from the versions of the original readily available online—features prominently in the song, sped up to a register that evokes chipmunk soul, if it were run through the cheese grater.

That’s not to say it sounds bad, insofar as such things aren’t a matter of taste. Aspects of it might prove infuriatingly catchy. At the very least, it’s deftly produced to sound of-the-moment, or close enough to signal that intent. The problem might be that it’s so hard to figure out what on earth is actually happening—and why—that it’s more tempting to run screaming for the hills than to try to stay engaged.

Put differently—just because they could, doesn’t necessarily mean they should have. A gentler reading might find it the perfect fit for the an era of shameless gorging on disposable media—even if it’s a look that might not age well, nobody cares, because tomorrow, nobody will be watching.