As protesters continue to march across all five boroughs of New York, the omnipresent LinkNYC terminals, best known for sharing fun facts about the city and providing Wi-Fi accessibility, have joined the movement.

On Tuesday, alongside thousands of other brands, artists and creators, LinkNYC ran its own #BlackOutTuesday takeover, displaying the names of Black people killed by police brutality or in instances of gun violence for 12 hours.

It was the first time LinkNYC had run a “takeover” of its usual content that extended for several hours. On Wednesday, the name display kept running, interspersed with LinkNYC’s other scheduled content including advertisements and public health information about Covid-19. 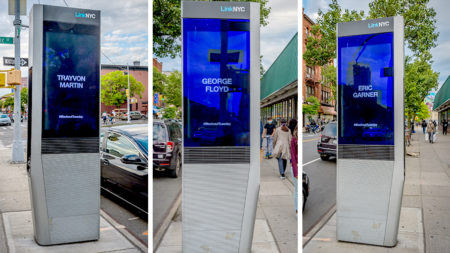 Previous campaigns featured on NYClink kiosks included displays of borough-centric art and information about voter registration to raise awareness about local elections. The terminals were originally designed to replace pay phones; their installation began in 2016. The company has also partnered with the Museum of the City of New York, NYC Pride and Climate Week NYC to provide information about those organizations, their missions and related events.

In late May, the terminals ran photographs and art dedicated to essential workers and frontline responders during the Covid-19 pandemic.

We wanted to share a few of the many amazing submissions we received for our #NYCHero campaign (including an illustration by @sadhanamadnani_art!). ✨ Thank you to all who submitted and thanks to all our heroes on the frontline. ???? pic.twitter.com/p2NGDGe8Hv

When asked about the cost associated with the ads, CityBridge, the consortium charged with installing the LinkNYC kiosks, declined to share figures, but said its inventory is sold on impressions based on times, locations and context in the city. New York is supposed to reap the rewards of the advertising revenue generated by the terminals, although in recent years city officials have accused the company of being “delinquent” and owing the city millions.