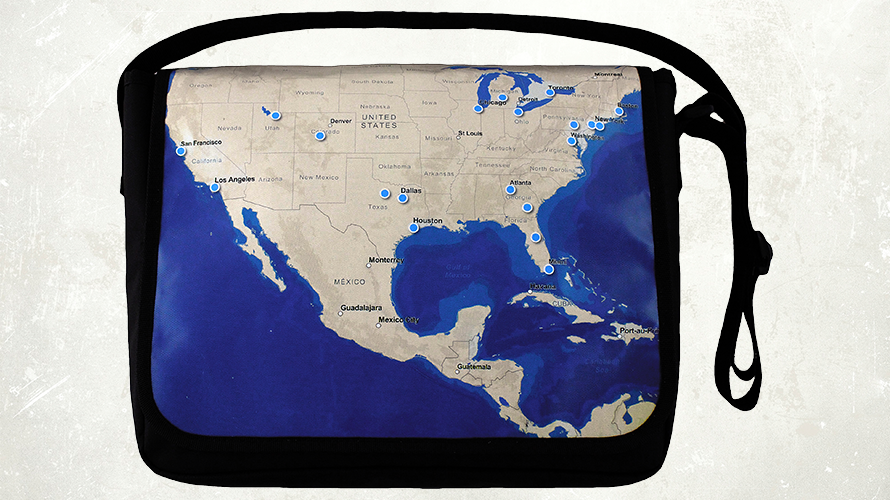 Mapt Gear imprints canvas totes with maps that pinpoint the location of brands’ headquarters or various locations. - Credit by Courtesy of Mapt Gear

Like many entrepreneurial professionals, Lynne Lambert sees a lot of swag in her business travels, and also like many professionals, she has to make a tough call about the swag bags she’s found herself toting around trade-show floors. It goes like this:

“Everything is heavily logoed, and I have to decide: Do I toss this? Do I bring it home and see if anyone in my household wants it?” Lambert says. “Or do I think, ‘This is a nice insulated mug and I will keep it because it’ll function well—but I know I’m not going to carry it out[side the house.]’”

As Lambert sees it, the problem with swag isn’t so much that it’s bad, it’s just that it’s, well, swag: otherwise useful items that are labeled so conspicuously with brand names and logos that she feels duped if she decides to keep the stuff.

“Many of us are not comfortable being a free walking advertisement for a company,” she says, “and many companies aren’t doing anything more than putting logos in big text across the products. So I think there’s room for a very tasteful product to come in.”

Moreover, Lambert decided to make that product herself. 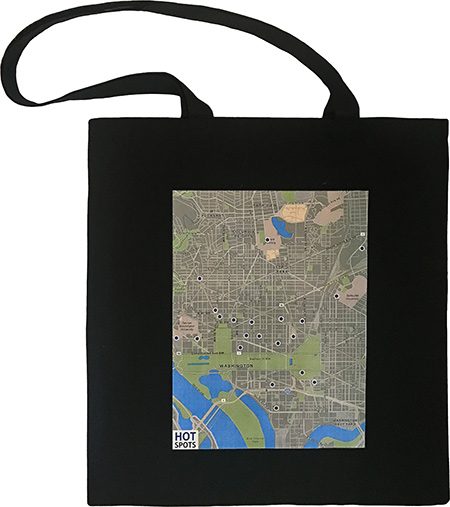 She just started her own brand—it’s called Mapt Gear—that makes the anti-swag swag bag, a high-quality, stylish tote that publicizes a brand without turning into a walking billboard.

As the name suggests, Mapt Gear puts maps on gear. Using a license to access a cartographic library, Lambert’s company will imprint a canvas tote with a map that pinpoints the location of a brand’s headquarters or its various locations or even the location of a conference it’s having. And while the customizable map leaves room for a brand’s name or logo, Lambert tries to keep that low-key. The idea is that less is more—an unusual image like an antique map with a pushpin in it should be sufficient to arouse curiosity and start a conversation about a brand without beating people over the head with a logo.

Besides, she says, if someone gets a swag bag as giveaway, especially if it’s a company giving it as a gift to its own employees, “they know it’s from you.”

“They’re not going to forget that you gave them this beautiful gift,” she adds.

And part of the value of that gift is that the employee isn’t reduced to becoming a walking shill for the company she already works for.

Time will tell if there are enough marketers out there sophisticated enough to respond to Lambert’s sophisticated approach to swag, but she’s certainly right about a couple of things—there’s a lot of swag out there, and a lot of it gets thrown away.

According to the Center for Exhibition Industry Research, there are something on the order of 9,000 trade shows held in America every year, all of them bursting with swag. In fact, in 2015, swag was a $20.81 billion business, according to the Promotional Products Association International, or PPAI. Totes and other bags make up 7.67 percent of the swag out there, second only to T-shirts and other “wearables.”

PPAI’s figures don’t confront how much swag immediately gets thrown in the trash, but anecdotal evidence suggests that quite a bit of it does. According to the blog for The Trade Group, maker of booths and other displays for conferences, “The unfortunate reality is that unwanted [promotional] materials get trashed and most of these items, including the bag itself, never make it past the hotel parking lot.”

Marketing software company Hubspot advises, “When event swag is really lame, it can make your attendees grumble … and look for the nearest trash can.”

And the blog for trade-show resource site Event Manager wryly observes, “Conference bags must breed in the dark. Everyone seems to have at least a dozen stuffed in the back of the closet.”

Lambert, who is also the founder of the popular NYC Subway Line collection of mass-transit merch, says that if Mapt Gear generates sufficient interest from corporate clients, she’ll expand.

For the time being, she offers three styles of bag plus a “Pad-Folio” iPad case. But she has apparel in mind, and not your usual cotton Ts, either. At a recent trade show, Lambert discovered a company that makes jackets out of the same material used for astronaut suits.